Trump as WEST SIDE STORY Cop

It's early Tuesday, September 26th.  Puerto Rico and her residents have been in a critical state for five days since being devastated by a monstrous hurricane.  People are without food, without water and Hurricane Maria wiped out all electricity.  Fellow Americans are desperate for help in Puerto Rico.  But Donald Trump, as we have seen in the news, has focused a bigger share of his attention on the NFL.  Hurricane Maria was the most severe hurricane to hit Puerto Rico in a century and he's arguing with the NFL.  Singer/actress Jennifer Lopez stepped up to help before the U.S. President did.  She's giving $1 million.  I was watching CBS THIS MORNING and the anchors reported on Trump's most recent Twitter messages.  He's still tweeting about the NFL.  About Puerto Rico, he noted that it's "suffering from broken infrastructure & massive debt owed to Wall Street and the banks..."  Have you seen the TV news reports from Puerto Rico?  Babies and wheelchair-bound elderly are without food and medication.  This morning, the mayor of San Juan told CBS that two people on life support died yesterday because the hospital ran out of fuel.  But Trump brings up debt to Wall Street. I hope he says something more compassionate by tonight.  In the meantime, he reminds me of a character in the classic film WEST SIDE STORY, the brilliant adaptation of the hit Broadway musical that gave us a modern, urban take on ROMEO AND JULIET.  In a modern setting, the war was between the Jets, a street gang of white guys and their girlfriends, and the Sharks, all Puerto Ricans.  It's a turf war rooted in bigotry and inequality here in America.

Trump reminds of a specific character in the movie WEST SIDE STORY.  And not one who sings or dances.

He reminds of Lieutenant Schrank, the police officer.  He's a man in power, a man in a position to keep the peace -- a man with a great responsibility to maintain fairness, to serve and protect.  But notice the regard this authority figure has for the Puerto Ricans.  Is he respectful when talking to the brown-skinned New Yorkers?  Notice how he fuels the anger of the white gang members with his remarks while also treating them a bit like buddies. 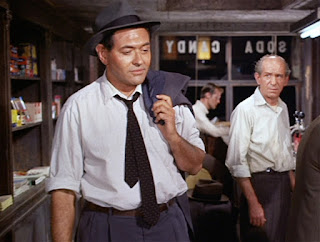 Is Lieut. Schrank being responsible or divisive with his power? 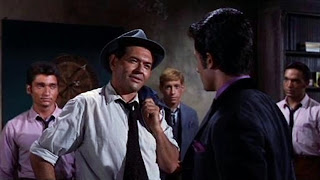 If you're on Twitter and want good reports from Puerto Rico, follow CBS News reporter David Begnaud.  He's filed some heart-wrenching, vivid reports from the island on the condition of the needy.

If you haven't already, take a look at the big picture.  WEST SIDE STORY, the Oscar winner for Best Picture of 1961.