Loved Him in HAIL, CAESAR!

I happened to channel surf over to HBO and I saw a close-up shot of actor Alden Ehrenreich.  If you're an enthusiast for Hollywood history from the days when the major studios reigned, that is exactly that kind of name a studio like MGM or Paramount would have changed to something easier to spell on a marquee and something that sounded more movie star-like.  Like...Eric Alden.  I stayed on the HBO channel because of him.  Because I am such a hard-core fan of his comic performance in HAIL, CAESAR, a Coen Brothers satire on Hollywood when the major studios reigned.  That was one of the best supporting actor performances I saw onscreen last year.  A good friend and I saw it when it played theatrically.  We howled with laughter at his work.  I admit it. I have watched HAIL, CAESAR at least five times this year on HBO and I wait for his scene with Ralph Fiennes.  It breaks me up every...darn...time. 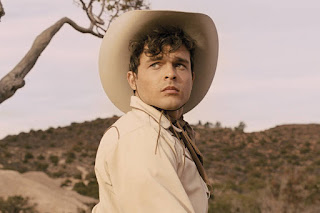 Alden plays an "Aw, shucks" kind o' guy, a singing cowboy star in low-budget but popular westerns.  He's a simple, unassuming, unsophisticated fellow whom, you can tell, is loved by the crew.  The studio, however, decides to elevate his image.  He's cast in a film version of a Broadway romance in which characters dress in tuxes and gowns for dinner.  It's a formal affair with a formal director. 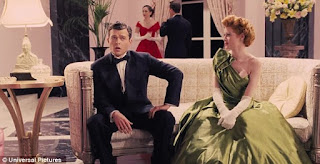 At rehearsals on the set, Hobie Doyle making an entrance in a tuxedo looks as comfortable as a steed wearing tap shoes instead of horse shoes.  Plus, Hobie is trying to do high society dialogue and he still has his cowboy twang.  It's the scene with the ascot-wearing, politely exasperated director that always makes me laugh.  It's my favorite scene in the movie -- and the scene that got the biggest laugh when my buddy and I saw it at the theater.  Fiennes plays the director trying to teach the clueless cowboy actor how to speak.  As he did in THE GRAND BUDAPEST HOTEL, a film that should have brought Ralph Fiennes another Oscar nomination, he surprised me with his exceptional comedy chops.  For years, we've grown accustomed to Ralph Fiennes making a great impression in deep-dish dramas like SCHINDLER'S LIST, THE ENGLISH PATIENT, THE CONSTANT GARDENER and there's his work as Lord Voldemort in the HARRY POTTER movies. 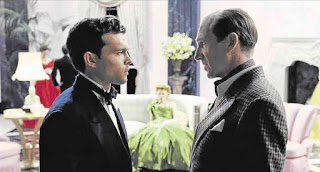 Alden Ehrenreich is so perfectly cast as Hobie Doyle and perfectly is how he plays that sweet cowboy character.  He gives HAIL, CAESAR! a warmth that's usually missing in Coen Brothers movies.  His scene with Ralph Fiennes is the stuff that film fans find in classic screwball comedies from the 1930s and 40s.

This week on HBO channels, Alden is in another Hollywood-on-Hollywood story that takes us back to the early 1950s.  RULES DON'T APPLY came out last year and did not get a big reception from moviegoers.  Warren Beatty directed the film and stars in it as a very loopy Howard Hughes.  As in Scorcese's THE AVIATOR starring Leonardo DiCaprio as the mysterious multi-millionaire aviator, film producer and ladies man, Hughes got batshit crazier the older he got.  But in Beatty's film, Hughes is crazy but still a visionary and he's warmer thanks to funny scenes.  I didn't seen the whole film, so I wont' review it.  But, once again, I loved Alden Ehrenreich who seemed to be an overwhelmed assistant to Hughes who tries to balance working for the famous man and falling in love with a young, lovely movie star hopeful who's also caught the playboy eye of Howard Hughes. 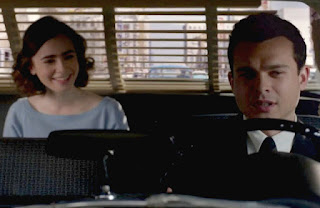 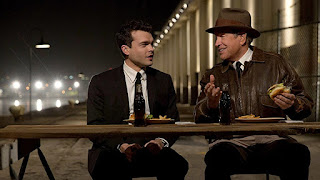 I'm convinced that if Alden Ehrenreich had been on the Paramount lot in the 1940s, he would've landed lead roles in Preston Sturges comedies.  You could see him in CHRISTMAS IN JULY, THE MIRACLE OF MORGAN'S CREEK or HAIL THE CONQUERING HERO.  That's the quality of his comedy acting you see in HAIL, CAESAR! and RULES DON'T APPLY.  There's a scene in what I saw of RULES DON'T APPLY that I loved.  Alden's character does not like to fly.  His boss wants to go up in his plane.  A co-pilot, played by Steve Coogan, is bewildered and anxious because, well, Howard Hughes is batshit crazy.  The assistant is holding on for dear life, the co-pilot realizes that one of the back doors is open and Howard Hughes is cheerfully, erratically flying the plane.  He pilots the plane and enthusiastically tells a show biz story about Al Jolson.  Then, following the story, Hughes breaks out into a Jolson medley.  Let me tell you.  I never expected to hear Warren Beatty sing "Swanee" in a movie.  Alden's charm, charisma and comedy talents come through in RULES DON'T APPLY also.

Alden Ehrenreich will become part of the STAR WARS legacy.  In an upcoming prequel, he'll play the young Han Solo.  I'm sure he'll be terrific.