Lord, how I love me some Taraji P. Henson.  I said this in a recent podcast with my friend Keith Price and I will repeat it right here, right now:  Nothing against Emma Stone for LA LA LAND and Meryl Streep getting her annual Oscar nomination, but Taraji P. Henson should have been a Best Actress Oscar nominee for HIDDEN FIGURES.  She's exceptional in it.  I watched HIDDEN FIGURES again this weekend.  It's airing on HBO.  I paid to see it twice in a theater.  Loved it both times. Loved it even more when I saw it on HBO.

It's a biopic, based on real people who had important jobs in America's space program at NASA at a critical time in the early 1960s.  President Kennedy was in competition with the Russians and Black Americans were fighting for Civil Rights.  HIDDEN FIGURES focuses on the three African American women who were trailblazers at NASA at a time when seats on buses and restrooms were segregated.  Schools were segregated.  This trio had to endure the humiliations of such segregation within the workplace while using their knowledge to help send John Glenn up into space. 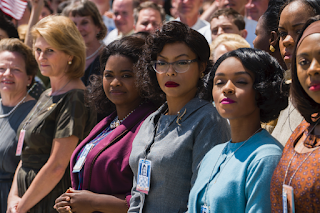 This historic space voyage of astronaut John Glenn would not have been a successful without the brain power and calculations of Katherine Johnson. 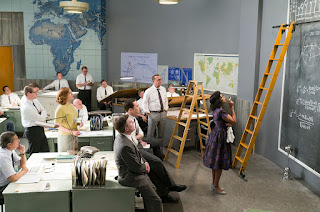 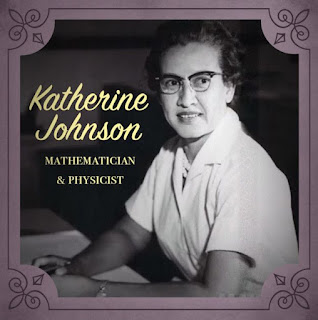 Back in my middle and high school years in South Central Los Angeles, when quality films like HIDDEN FIGURES came out, films that were entertaining and educational, schools for special rates for student showings.  That often meant we'd get on buses for a field trip to Hollywood to see the movie on a school day.  I don't know if schools still do that today as part of their fine arts programs.  I have two nephews of middle and high school ages.  I would want them to see HIDDEN FIGURES.  I'd want to see it with them and stress that it's their history as Black Americans.  It's history their uncle remembers.  I was in grade school when John F. Kennedy was president and the Civil Rights Movement was in full force.  There is TV news footage in HIDDEN FIGURES that I remember seeing the days the events happened when I was a little boy.

This is great American history in HIDDEN FIGURES, history that is still achingly relevant today.  It expertly shows how the playing field has not been level in our country's racial history.  A Black woman with a brilliant mind at NASA was not allowed to have coffee from the same coffeepot as her white co-workers.  But, yet, she's working just as...if not, twice...as hard.

Kirsten Dunst, an actress I love watching and interviewing, has excellent as the office supervisor to the character Octavia Spencer plays.  Dunst is so accurate and good in her performance.  I have worked for people just like that -- mostly in TV newsrooms in liberal New York City.

All three lead actresses -- Taraji P. Henson, Octavia Spencer and Janelle Monae -- remind me so much of women in our neighborhood when I was growing up.  They remind me of Mom and friends of our family.  The tribulations of those three women remind me of pressures and angers I've felt as a grown up.  I will admit it to you.  There is a strong, memorable scene Taraji P. Henson has as extraordinary mathematician Katherine G. Johnson.  Ms. Johnson, in the middle of the office, has to explain to her boss why her restroom breaks are so long.  It's because the "Colored" ladies room isn't even in the same building.  She has to run outside to another building.  In that scene, when she calls everyone out with the realization of how the playing field is not level for her, that she cannot even drink from the same coffeepot, she brings tears to my eyes.  I've felt that hot sting of inequality.

If you get HBO, make a point to see HIDDEN FIGURES if you haven't already.  Consider making it family viewing.  The vital, trailblazing achievements of those three women were not in the history books when I was a kid.  They should have been.  Their story did come out -- and it's remarkable.

Katherine Johnson is now in her late 90s.  She appeared on the Oscars telecast early this year.  NASA celebrated her achievements with a building named in her honor last year. 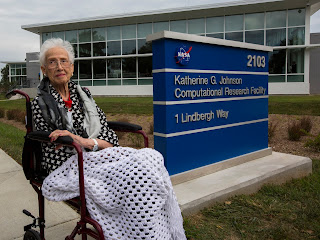