CASABLANCA.  A true Hollywood classic, released during World War 2 and the Oscar winner for Best Picture of 1943.  Ingrid Bergman was the luminous leading lady in the wartime love story.  In the film, an African American cast member, Dooley Wilson, would play an upscale performer in a swanky nightclub.  That performer would have a cocktail with the two white lead characters.  Dooley Wilson as Sam would share a bottle of champagne in Paris with Rick and Ilsa famously played by Humphrey Bogart and Ingrid Bergman.  This was a breakthrough for a Black actor in a 1940s top Hollywood studio film.  The Black character was a positive image, not treated as a second class citizen.  The actor interacted with the stars in the scene, not as a domestic but as an acquaintance.  That sort of scene, again with a positive racial image, happened in another love story that starred Ingrid Bergman.  She wasn't in the scene, but her leading man was.  In 1961's GOODBYE AGAIN, released during America's Civil Rights era, future Best Actress Oscar nominee Diahann Carroll has a short but wonderfully sophisticated scene.  By that time, Carroll had been onscreen with Dorothy Dandridge in CARMEN JONES (1954) and PORGY AND BESS (1959).  She'd starred in the Broadway musical HOUSE OF FLOWERS. 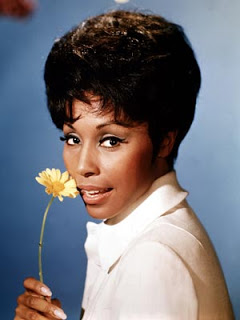 Diahann Carroll sings in 1961's GOODBYE AGAIN, entertaining the lead male character played by Anthony Perkins.  I love these shots from the movie. 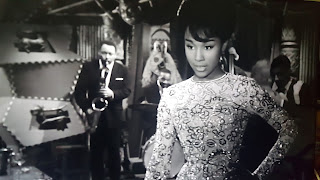 He stars as the younger man who's fallen in love with a mature married woman played by the still luminous Ingrid Bergman.  Because the woman is married, the relationship is -- of course -- complicated.  He's got a case of the blues. 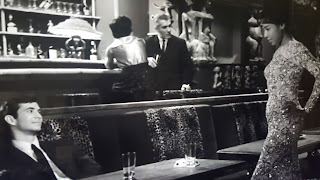 He invites the singer the join him for a drink and some conversation. 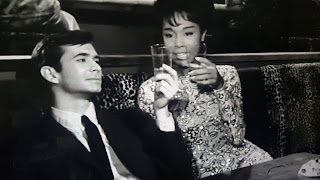 She accepts his invitation. 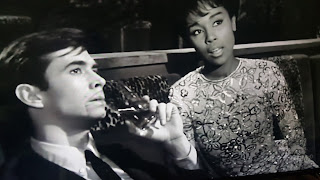 As in CASABLANCA, this was a breakthrough moment for the upscale presentation of a Black character and the actor exchanged dialogue with one of the white stars.  Even though her musical numbers were given the deluxe treatment when Lena Horne was at MGM, the Tiffany of Hollywood studios for musicals, the presentation of Horne was limited.  The glamorous, gorgeous African American singer never got to interact with any white fellow actors in any MGM movies.  She was featured in films along with Judy Garland, Frank Sinatra, Esther Williams, Gene Kelly, Mickey Rooney and Van Johnson...but she never got to do dialogue with them.  This Hollywood restriction frustrated Horne in the 1940s.

In 1962, Diahann Carroll would open on Broadway in NO STRINGS, a musical drama with songs by Richard Rodgers.  In yet another vehicle set in Paris, she would play a high fashion model living and working in Paris who meets and falls in love with a Pulitzer Prize winning novelist.  The Black model can do better financially in Paris that she could back home in 1960s America.  He's suffered from writer's block since arriving in France.  She restores his confidence.  Confidence restored, he wants to return to America.  But will their interracial romance have the freedom at home that it does there in Paris?  Social issues were the undercurrent in this show.  Diahann Carroll introduced the song "The Sweetest Sounds." She also became the first Black woman to win the Tony Award for Best Actress in a musical.

Unfortunately, Hollywood didn't have the balls to make a film version of this groundbreaking hit Broadway musical, NO STRINGS.  Here's "The Sweetest Sounds" sung by Diahann Carroll and Richard Kiley from the original Broadway cast recording