Did you know that a 1949 British comedy starring a young Petula Clark influenced a Billy Wilder classic?  First of all, it should be no surprise that the master director and screenwriter appreciated British films.  Look at his adaptation of the hit Broadway comedy, THE SEVEN YEAR ITCH.  He tailored that to fit the talents and star quality of Marilyn Monroe.  And his tailoring fit her like a velvet glove.  Tom Ewell originated the role on Broadway.  He plays the middle-aged, average New York City man who works in the publishing business.  The paperback division.  His wife and little boy are in Maine to escape the dog days of the Manhattan summer.  He has rather innocent James Thurber-esque fantasies in the apartment while he's alone, missing his wife and son.  In his brownstone building, his fantasies increase when he meets the gorgeous young blonde TV commercial actress who has rented the room upstairs.  The Girl was played by Marilyn Monroe at her sensational sex symbol peak. 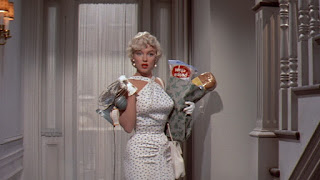 About the adaptation...did you see the William Wyler classic THE HEIRESS starring Olivia de Havilland?  Remember the maid, Mariah?  ("Bolt the door, Mariah.")  She was played by Vanessa Brown.  Brown originated the role of The Girl on Broadway opposite Tom Ewell in THE SEVEN YEAR ITCH.  Let's face it -- Mariah was no Marilyn Monroe. 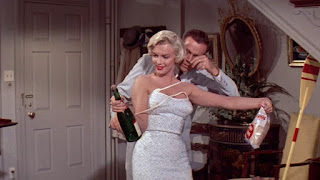 In Wilder's THE SEVEN YEAR ITCH (1955), he joshes the British film classic, BRIEF ENCOUNTER.  In the 1945 drama, an innocent friendship between a suburban wife and a hospital doctor develops into an unexpected affair.  Both characters in this David Lean film are middle-aged.  His film was a big hit with American audiences too.  Rachmaninoff's Piano Concerto No. 2 is BRIEF ENCOUNTER's major music theme.  Wilder gently lampoons Lean's film by using the same Rachmaninoff piece for married Mr. Sherman's middle-aged fantasies in THE SEVEN YEAR ITCH when he's innocently attracted to The Girl Upstairs. 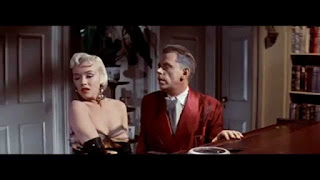 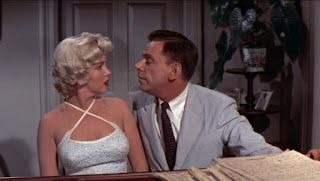 BRIEF ENCOUNTER had a piece of business that inspired THE APARTMENT.  In BRIEF ENCOUNTER, the doctor has a single friend who has an apartment.  The doctor uses his judgmental bachelor friend's apartment for privacy with the married woman. 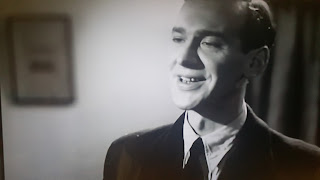 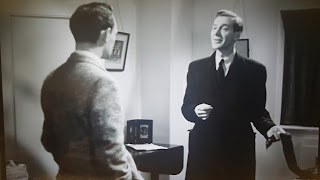 This character with the apartment, Stephen, intrigued Billy Wilder and inspired Jack Lemmon's C.C. Baxter character in THE APARTMENT, the Oscar winner for Best Picture of 1960.  Wilder won Oscars for producing the Best Picture, for directing it and for Best Original Screenplay co-written with I.A.L. Diamond. 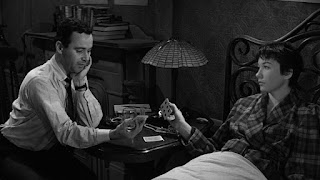 A lesser known British film is the 1949 comedy/drama called THE ROMANTIC AGE and later retitled NAUGHTY ARLETTE.  We meet The Dicksons.  Mr. Dickson is the rather starchy, middle-aged teacher in a girl's academy.  Mrs. Dickson is a pianist.  Future 1960s pop music star Petula Clark played their charming daughter, a student at the school.  Mai Zetterling, not French and proving it with her accent, played the irritating French girl determined to seduce the teacher.  She does succeed at getting him in a hot kiss in the rain.  His lips respond.  Will this spoiled French tart succeed in breaking up his marriage and home life? 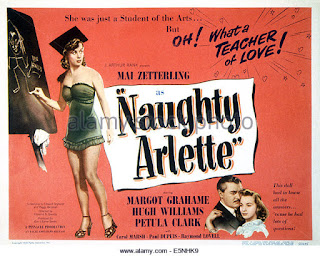 About ten minutes into the 1949 film, Mrs. Dickson is at the piano.  She plays a selection that's immediately recognizable to Wilder fans. It's heard again in NAUGHTY ARLETTE.  The composition is called "Jealous Lover."  We came to know it as the wonderful and popular Theme to THE APARTMENT.  Billy Wilder used the Charles Williams music composition from the 1949 British film for his 1960 Hollywood classic.  If I was Charles Williams, I'd be thrilled that my memorable piece of music found a great life by being used in a much better film than it originally was. 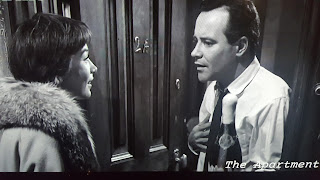