For me, it was a religious experience.  Like seeing the apparition of a saint.  In my head, I heard sweet music -- strings, flutes and a choir of angelic voices singing.  Why?  Because, as two friends and I were headed from the parking lot into the lobby area of a Los Angeles hotel, we turned a corner and there stood...screen goddess Sophia Loren.  She was leaving the lobby with companions.  This was in July 2016.  All we could do was stop and stare.  We were awestruck.  Up close, she looked flawless and regal and divine.  As she has for years. 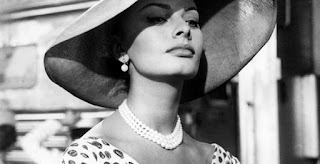 Sophia Loren was one of my mother's favorite actresses.  Loren quickly became one of mine too.  Every year on my birthday, she'd always smile and mention "You were born on the same day as Sophia Loren." 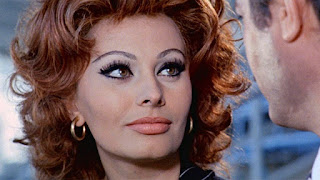 I admit it.  I smiled when Mom said that too.  I loved being connected to a movie legend's biographical data like that.

I vividly recall both Mom and Dad laughing with delight at the famous striptease scene in De Sica's YESTERDAY, TODAY AND TOMORROW starring Sophia Loren and Marcello Mastroianni. 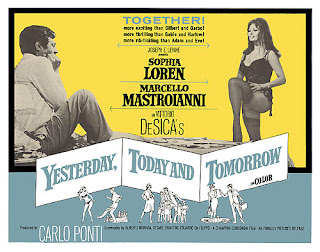 When my younger sister and I were gradeschoolers, whether the film was dubbed, subtitled or in English, if it starred Sophia Loren and it was at the drive-in, The Rivers Family was going to the movies.  Mom and Dad were definitely fans.

They were such fans that they'd see Sophia Loren in a historical epic that got so-so reviews. Like THE PRIDE AND THE PASSION co-starring Cary Grant and Frank Sinatra. 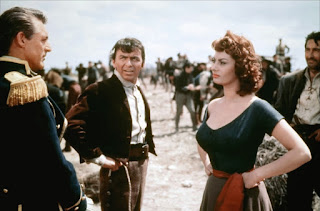 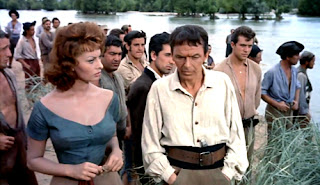 Our mother passed away this year.  In June.  I loved her very, very much and the loss of her puts a hole in my heart that will never go away.  She was in her 90s and had a long life.  Still, I will miss hearing her cheerful birthday wishes and the reminder that I was born on September 20th, the same day as Sophia Loren.

I told Mom about unexpectedly coming face-to-face with gorgeous Sophia Loren in L.A. She got such a kick out of that story.