In Praise of Eddie Marsan

STILL LIFE. Actor Eddie Marsan was excellent in STILL LIFE. I am not the only African American moviegoer who feels that he is one of the best actors working in film and television today.  I know that for a fact.  I'm a proud Eddie Marsan fan. 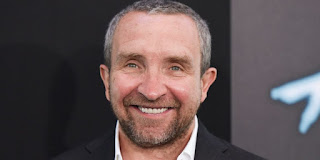 Back in 2008, I saw Mike Leigh's HAPPY-GO-LUCKY because two working class, average movie-goer Black friends of mine in New York City raved about it and the performances from Sally Hawkins and Eddie Marsan.  I went to see it and immediately shared their opinion.  Sally Hawkins, as the steely optimist, should have been an Oscar nominee for Best Actress.  Her character constantly seemed to be in some object that moves her forward.  Like a car.  Eddie Marsan played her hot-tempered driving instructor.  Even though his explosive anger makes him as red in the face as a firetruck, her optimism can not be dented or detoured. 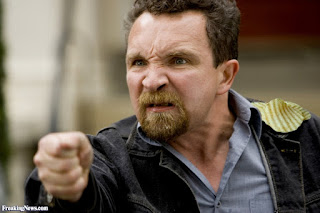 HAPPY-GO-LUCKY was really my introduction to Eddie Marsan and Sally Hawkins. 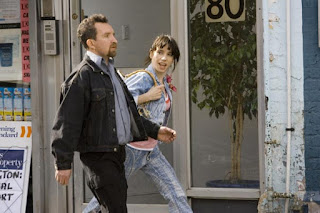 Most TV viewers here in the U.S. will know Eddie Marsan from Showtime's RAY DONOVAN series as Terry, the boxer stricken with Parkinson's disease. 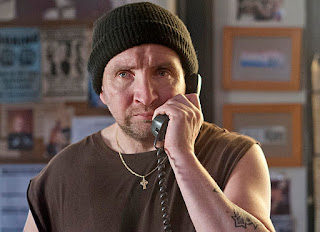 Early last month I binge-watched an original musical comedy TV series that ran for a couple of seasons on ABC.  Set in Medieval times, it was for folks who dig Broadway showtunes, MONTY PYTHON AND THE HOLY GRAIL, the Broadway musical it inspired, MONTY PYTHON'S SPAMALOT, and SHREK.  The series is GALAVANT.  A few of the songs written for this comedy series were good enough for Best Song Oscar nominations had GALAVANT been a feature film.  One of the things that really tickled me about the first season is that, near the season finale, its scripts make reference to the fact that the cast doesn't know if the show will be picked up for a second season.  That knowledge gave all involved a "go for broke" attitude as episodes neared the finale.  The show got funnier, hipper and saucier. 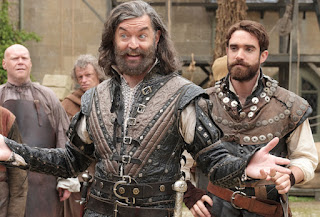 The opener for Season 2 was one of the funniest sitcom episodes that I'd seen from ABC in years.  And this was an ABC show.  Lead male characters from GALAVANT -- Galavant the knight and his clueless King --  must go to the Enchanted Forest.  The Enchanted Forest turns out to be pretty much a Medieval gay bar.  With entertainment.  It's like CAMELOT goes to West Hollywood. 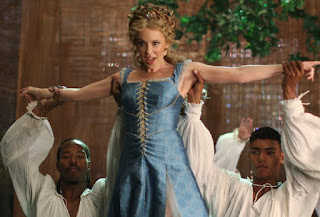 The King is still clueless.  Death visits GALAVANT in Season 2.  Death gets to perform a big musical production number.  Halfway through this funny number, I said out loud, "Whoa!  It's Eddie Marsan!"  Yes, he sang and danced the role of Death.  His Fosse musical-like song is called "Goodbye."  It's a hoot.  I loved it.  Eddie Marsan is terrific with comedy material.  That's in the 7th episode of Season 2, called "Love and Death." 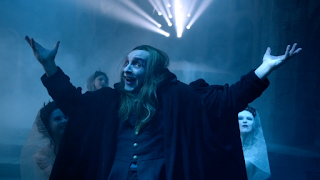 GALAVANT did not get picked up for a Season 3.  I know the feeling.  In New York City, I was a frequent guest critic on a weekly film review/interview show that I loved.  It aired on national cable's ARISE TV and I still feel that it was a groundbreaking program.  ARISE ON SCREEN was hosted by an African American film critic who not only reviewed mainstream Hollywood films but also independent and foreign films.  Plus, he gave frequent attention to LGBT and women filmmakers.  Every week, he had two guest critics to join him in reviews.  This was also groundbreaking because he always presented women -- especially women of color -- to give their reviews.  As I've written before, the field of film critics on weekly TV on American news and syndicated shows lacked race and gender diversity for decades.  ARISE ON SCREEN was rich with diversity every weekend, but the entertainment press never bothered to write about our show.  We didn't get picked up. 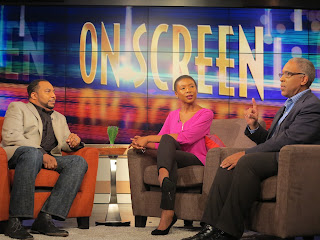 I was one of the ARISE ON SCREEN guest critics for the broadcast in which STILL LIFE was reviewed.  The three of us -- two Black men and one Black woman -- gave STILL LIFE a very enthusiastic thumbs up recommendation.  It's a winner.  Mr. Marsan's brilliance shines.  I'd put this Eddie Marsan performance in a category alongside Alec Guinness' in the 1950 British classic, LAST HOLIDAY.

In the 2015 British import, Marsan plays a quiet man who deals with death for a living.  He's a case worker who contacts relatives of the recently deceased.  He requests that the survivors get involved with the funeral arrangements.  He works to bring dignity to the dead because the people whose cases he handles died alone.  Loved ones had pulled away from them and didn't keep in touch.  He himself is like the deceased.  There is no loved one who keeps in touch with him.  That's a shame because he's a very dear man.  He lives alone.  He eats alone.

At the funeral services, he's often the only person in the pews.  John May, the case worker, is not a dull man even though his work and environment at work and at home seem sterile.  As he goes about his commitment to the dead, his life changes and takes on some color.  Something sweet and unexpected enters his world.  Here's a trailer for STILL LIFE:
STILL LIFE.  Be prepared for poignancy and a marvelous performance by Eddie Marsan.
at September 25, 2017