The Morning Matt Lauer Kissed Me

I knew that post title would get your attention.  TV has changed. Society has changed.  But, from what I saw this morning on NBC's TODAY Show, one thing has not changed.  That is -- Matt Lauer has pretty much remained a true gent in a profession that can sometimes change people in an unflattering way.  This morning, January 6th, TODAY celebrated Matt Lauer's 20th anniversary as co-host on the program. 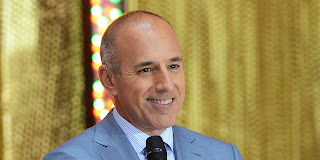 Let me tell you about the brief time I got to work with Matt on the air.  Talk about how society and TV have changed, Matt and I worked together in days when a black president of the United States was usually the punchline of a comedy movie script and openly gay actors and news anchors working on network TV was totally unheard of.  Matt Lauer was as absolute sweetheart to me in 1992 during my bumpy start at WNBC TV. 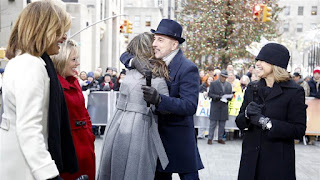 Note:  For you who know me, forgive my reposting video you've already seen.  I'm doing it for the new folks coming to my blogsite.

Matt Lauer and I share a TV credit.  We both worked on editions of PM MAGAZINE, a syndicated weeknight entertainment and lifestyles show that was popular in the 1980s.  He was a co-host in New York City, I believe.  I was a weekly contributor/writer on the Milwaukee edition for that city's ABC affiliate.  I'd fly to New York and L.A. to do celebrity interviews and PM MAGAZINE gave me the first major lift of my early TV career.  My interviews of Sally Field, Meryl Streep, Jessica Lange, Ben Kingsley, Dolly Parton and others aired nationally.  That made me the first African American male to be seen doing celebrity interviews nationally on PM MAGAZINE and that work helped me get a New York City local TV job offer in 1985.  I did two years on local TV in New York City and then I had three fantastic years on VH1.  This is backstory to keep in mind.  After my VH1 years, one gig I had was as host of a syndicated summer replacement nighttime game show.  In New York, the game show aired on the local Fox affiliate.  During its run, I got contacted to meet with a WNBC news exec about being on an upcoming new project.  That new local show would premiere in September 1992 and would be called WEEKEND TODAY IN NEW YORK.

The syndicated game show I'd hosted did not get a green light for more episodes.  The WNBC job offer appealed to me because, initially, I was offered the opportunity to do entertainment news, interviews and film reviews.  THAT really appealed to me because black people were never seen as weekly film critics on TV news programs or syndicated film review shows.  When I was on VH1 in the late 80s, I got a rave review in The New York Times for my prime time talk show.  I was the first black person to get his own celebrity talk show on VH1.  Here's a demo reel:

In 1992, Matt Lauer was new on WNBC local news -- and one of the hardest working people on local TV.  He'd co-anchor the early morning WNBC newscast, the afternoon newscast and he'd often do the evening newscast with Sue Simmons.  I think the station just put a cot next to the men's room on the studio floor for Matt so he wouldn't have to go to his apartment.  That's how much time he put in at WNBC news.  Matt was also assigned to be co-host/anchor of WEEKEND TODAY IN NEW YORK, a show that would begin airing at 6am on a Saturday morning.

We premiered at a time when race and sexual diversity had yet to be embraced widely on TV.  America was in the grips of the AIDS epidemic.  ACT UP was in the news with its gay activism  protests.  Next week, the TODAY Show celebrates its 65th anniversary.  I admit that one reason why I took the WNBC local job was that I wanted to move up within the company and do celebrity interview segments for the NBC network edition of WEEKEND TODAY.

The afternoon before WEEKEND TODAY IN NEW YORK premiered, I was told that I would not cover entertainment on the show.  No celebrity interviews, no entertainment news, no film reviews.  Instead, I would do funny outdoor liveshots and a segment called "Bobby's Best Bets."  That was a "things to do around time" list of items lifted from New York Magazine.  Basically, it was a "Community Calendar" segment.  My thought was -- "Y'all got to be jokin'.  WHAT?!?!?!"

One of the show's producers said she didn't think I had "the skills" to cover entertainment.  Another WNBC newsroom employee thought I was an intern.  Of course, I wanted to scream "What is wrong with you white people?!?!?"  But, what I discovered was that none of them had ever watched my demo reel or read my resumé.  They were unaware of my TV experience.  A few newsroom people thought the WNBC gig was my first TV job.  However, Adam Sandler and Ellen Cleghorne, then with SATURDAY NIGHT LIVE, would see me in the building and asked "Why aren't in the studio doing the celebrity interviews like you did on VH1?  Why are you at shopping malls?"

I was angry.  I was humiliated.  But I did the work.  In the short time we worked together on the show, before his ascent to network morning stardom, Matt Lauer would compliment on my work and take a moment or two to talk to me.  He always made me feel significant.  He was aware of my previous work.  He pushed for me to do what I do best on the weekday newscasts.  He wasn't successful in that push, but I did see him enthusiastically pitch me to the weekday newscast producers.

In October or November 1992, I had to do a liveshot in Manhattan's Union Square.  It was to promote the non-profit organization www.newyorkcares.org.  While I was on live, Matt Lauer arrived for a segment.  My cameraman was giggling because he could see Matt sneaking up behind me.  But I couldn't.  Matt did sneak up...and he kissed me on the cheek on live TV.  I have not washed that cheek since.  Thousands and thousands of women and gay men were so jealous of me that morning.  Thank you, thank you, thank you, Matt Lauer.

Matt was replaced on our weekend show only because he was overworked on WNBC local -- and he was readied for a network upgrade.

I did eventually get to do occasional celebrity interviews on WEEKEND TODAY IN NEW YORK...after I pushed and pushed and pushed.  I was still assigned the "Go out there and be funny" live outdoor segments.  During my time on the show, my one-year contract expired.  I was not offered another contract but I was told that my work was very good and I was so popular with viewers that I was kept on that Saturday and Sunday show.

A week before Christmas 1992, my boyfriend was diagnosed with full-blown AIDS.  He'd been laid off from a good longtime job a month before and was looking for work.  Then came the diagnosis.  Then his roommate asked him to move out because of the diagnosis.  I became his primary caregiver in New York City and he moved in with me into my humble studio apartment.  He died in June 1994.  A few WNBC newsroom employees I trusted pulled me aside and urged me not to be "an angry black man" despite how management treated me and not to tell anyone that my partner had AIDS, even though my health was good.  They felt that if news of my personal life was revealed, management might not need me on the show anymore -- and my income from that weekend show helped me take care of my terminally ill partner.  If I had been made to feel comfortable about being *out* and sharing my story, I would have loved doing pieces to share what I'd learned about caregiving and helping someone with AIDS.  In those days, I was surely not the only person going through that experience.  But I was told to keep quiet for fear of being unemployed.  And I did not have an agent to help me get other work.  There were so many times that I slept sitting up in a chair at Richard's Mt. Sinai Hospital bedside, woke up, took a shower in his hospital room and caught took a cab to 30 Rock to be at work by 4:30am so I could be funny on a live news program.

Another thing:  I was told by the local news boss that, even though my work and popularity were both good, I would not be offered another contract, I would not be getting spots on the weekday local newscast and I would not be moving up to network exposure.  But he wanted me to stay with WEEKEND TODAY IN NEW YORK.

I stayed long enough to make the money to help my late partner's family down South pay off his funeral expenses in full...and then I quit.  That was in January 1995.  That particular WNBC management team, by the way, has been long gone.

I will never forget Matt Lauer's kindness to me when we worked together in 30 Rock.  I needed kindness then.  Happy Anniversary, Matt.