On "Baby, It's Cold Outside"

At Christmastime, I was visiting my wonderful sister in the Minneapolis area.  There was a feature on the local news one evening about a local singing duo, male and female, that had changed the lyrics of a popular tune to make it socially correct.  The feature got picked up for network airing.  The duo's rewrite annoyed me.  Enough with the controversy about this Oscar-winning song!  I have grown very tired of the unnecessary kerfuffle over "Baby, It's Cold Outside, a tune performed in an MGM musical comedy.  Only one A-list Hollywood studio had a queen of aquatics.  She was one of the four actors who introduced "Baby, It's Cold Outside" and helped it win the Oscar for Best Song of 1949. 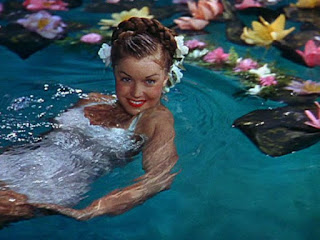 Only MGM had Esther Williams under contract.  The studio built special pools for her numbers.  Hollywood discovered this lovely athlete.  The competitive champion swimmer could handle a song and she moved well in dance numbers.  MGM utilized those skills in breezy musical comedies that allowed her to get in the swim with most of her leading men throughout the 1940s. 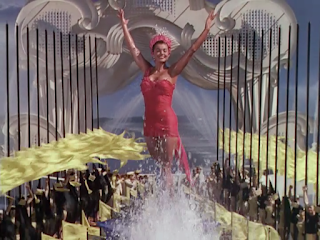 NEPTUNE'S DAUGHTER was a musical comedy that paired Esther for the third time with Ricardo Montalban.  The story is set in a sunshine state like Florida.  Esther plays the former aquatics dancer who becomes a successful business executive when she starts designing swimwear.  A celebrated South American polo team is arriving for a match and she plans a deluxe swim show to advertise her swimwear brand and to get the foreign athletes lots of publicity. 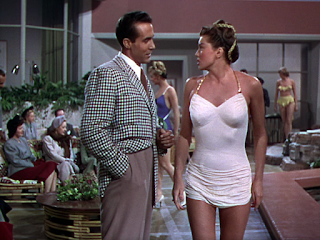 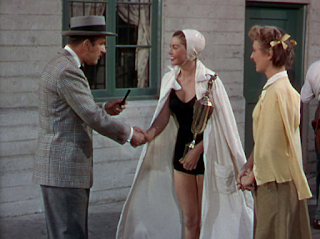 Her younger, kooky sister plans to get her lips on the handsome playboy captain of the team.  In order to keep her from making a fool of herself, the big sister dates the polo captain for the sake of keeping nonsense out of her business plans.  But he likes the swimwear exec and she's attracted to him.  There's a whole mistaken identity bit in the movie.  The comic sidekick sister meanwhile has a big crush on another guy.  He's played by Red Skelton.  His character is the comic sidekick to the polo captain

"Baby, It's Cold Outside" is a call and response tune that's meant for laughs.  There's no ice and snow outside.  They're in a sunshine state.  He's not slipping a drug into her drink to take advantage of her.  Watch the movie.  This song has unjustly acquired the reputation of being a Christmas holiday tune that suggests date rape.  Wrong.  Again, watch the number in the movie.

If young singers today are rewriting the lyrics to make it "politically correct," they are tampering with an artist's work.  The man who wrote "Baby, It's Cold Outside" also wrote the scores for three classic Broadway musicals -- GUYS AND DOLLS, THE MOST HAPPY FELLA and HOW TO SUCCEED IN BUSINESS WITHOUT REALLY TRYING.  Leave the work of songwriter Frank Loesser alone.

Rewriting the lyrics shows that today's artists have not done their homework and it also shows a lack of imagination.  They have not watched either the film in which the song was introduced nor have they watched the number.  The number was not just performed by Esther Williams and Ricardo Montalban.  It was also sung by Betty Garrett (as the sister) and Red Skelton.  In their part of the number, Garrett as the kooky sister is the aggressive one. 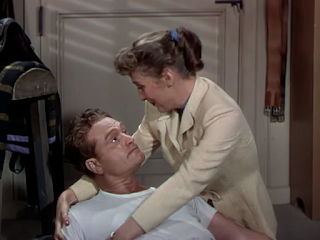 Here is "Baby, It's Cold Outside" done by Esther Williams, Ricardo Montalban, Betty Garrett and Red Skelton in the 1949 musical comedy, NEPTUNE'S DAUGHTER.
See?  Two different approaches to the same song in the same number.  There's no need to rewrite it.  Either be a creative performer and give your rendition a different delivery -- or do another song.

NEPTUNE'S DAUGHTER is available on DVD.