When I was growing up in South Los Angeles, I had a crush on Debbie Reynolds that started when I was in grade school.  One weekend afternoon, while my mother was trying to get stuff done around the house, I was way too energetic and focused my energy on her.  I was working her last good nerve.  To get me out of her hair, she sat me down with a snack on front of the TV.  She turned to Channel 9, then called KHJ, and a "Million Dollar Movie" matinee was about to begin.  SUSAN SLEPT HERE starring Debbie Reynolds was the feature.  Mom said, "Here.  Watch Debbie Reynolds."  There was 1954 Debbie Reynolds, at a peak of her 20-something cuteness, playing the prettiest juvenile delinquent ever.  She had a ponytail, she was wearing blue jeans, and she was kicking two middle-aged cops on Christmas Eve.  As the cops dragged Susan into the apartment of a Hollywood screenwriter who'd become her temporary guardian, she let out such a piercing scream that it burst one of the bulbs on his Christmas tree. 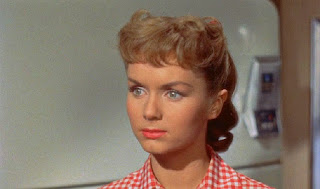 She was my kind o' girl.  And then when she used the screenwriter's Oscar as a nutcracker.  Well...my little grade school heart took wing. 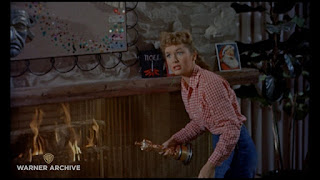 When I saw her on TV in SINGIN' IN THE RAIN, I knew that I wanted to grow up and marry her. 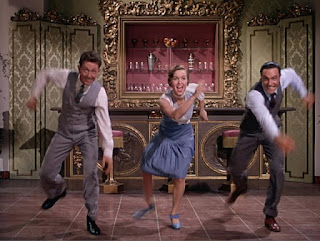 Debbie Reynolds had a dedicated fan in my mother too.  Mom saw her as a tireless entertainer who was a fellow working mom, often a single working mom.  As for Carrie, I fell in love with her ne special night in Milwaukee.  That's the city where I attended college and began my professional broadcast career.  During my first broadcast job out of college, I was a local radio station news reporter.  I got a pass to a preview screening of a new movie called STAR WARS.  There was Debbie's daughter as Princess Leia.  I loved her.  So did everyone else in that packed movie theater. 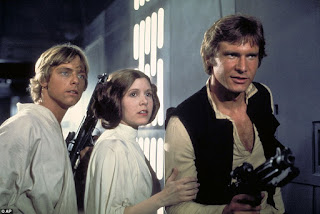 I still cannot believe that I had a national TV talk show and two of my all-time favorite guests were Carrie Fisher and, later, Debbie Reynolds.  When Carrie entered the studio and when Debbie entered the studio, there was a delicious breeze of warmth and wit.  They made us laugh.  They were playful.  Both hung around after they taped my show to pose for photos and chat.  Not all celebrities did that.  Carrie Fisher and Debbie Reynolds made a direct hit on hearts and stayed there.  When Carrie was on my show, you knew how special her mother was to her.  When Debbie was on, you knew how special Carrie was to her. 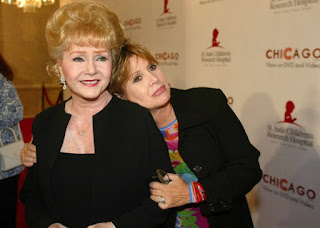 When they both died, we all felt as it we'd lost two beloved friends of the family.  In their relationship, we could see ourselves reflected or see a dream version of ourselves.  We could see family friction in youth that faded and lead to fierce family devotion.  They died during the holiday season, after Christmas and before New Year's Eve.  Starting with Thanksgiving, America focuses on how to get through a dysfunctional family gathering for a meal.  Let's face it.  Millions of us probably have that one immediate relative who treats us more like a casual, low-priority acquaintance than a close relative.  That breaks our hearts.  But in the story of Carrie Fisher and Debbie Reynolds, we see a family love and devotion so close that it shattered a certain Hollywood family stereotype in all the years that followed the publication of MOMMIE DEAREST.

You can see that tender, tight mother/daughter bond for yourself in BRIGHT LIGHTS, a documentary on Carrie Fisher and Debbie Reynolds that airs on HBO.  You will laugh.  You will cry.  You will miss them.  I heard about this documentary months ago when it had screened at film festivals.  It was seeking a distributor.  With the sudden passing of both stars, it found a place to air.
As Carrie says in the documentary, Hollywood didn't exactly "lavish her with awards" when talking about her mother.  They were on their way to the Screen Actors Guild awards just a year ago when Debbie was given the SAG lifetime achievement award.  And a well-deserved one it was.  Debbie and Carrie were onstage together for the acceptance and, as always, they made us laugh.  Just a year ago.  Hollywood, around that same time, gave Debbie a special Oscar.  She was ill and couldn't attend that ceremony.

Over the last few years, I've written blog pieces expressing how I felt Hollywood dropped the ball on showing appreciation for Debbie Reynolds and Carrie Fisher.  Debbie had the reputation for being one of the hardest working women in show business for decades.  She was our connection to the Golden Age of Hollywood.  Under contract to MGM during its final years as the Tiffany studio of movie musicals, she became a star with her lead role in 1952's SINGIN' IN THE RAIN.  She got a Best Actress Oscar nomination for MGM's deluxe musical, 1964's THE UNSINKABLE MOLLY BROWN.  She lost to Julie Andrews for MARY POPPINS, Andrews' film debut.  I've often said that Debbie Reynolds, up for Hollywood gold for that performance, should've received an Olympics gold medal.  The "He's My Friend" number in that movie was a triathlon with a downbeat.  She acts, sings and dances -- in high heels, high hair and an evening gown.  Look.
Debbie had to fight for that part in MGM's film version of a hit Broadway musical.  Shirley MacLaine was also a guest on my old VH1 talk show in the late 80s and we talked about it.  Shirley was slated to do the film.  There was a contract snag.  Shirley told me that Debbie contacted her and honestly said why she wanted the role.  She felt that Shirley would go on to other good roles, but the era of the Hollywood musicals was ending.  Debbie sensed this would be her last chance at a big, first class Hollywood musical.  Shirley did go on to other good roles, roles that brought her Oscar nominations with one victory.  She won Best Actress for the mother/daughter tearjerker TERMS OF ENDEARMENT.  Shirley laughed in our VH1 interview and added that it was "karma" she was in rehearsals at that time for a role that Debbie wanted.  The role was Hollywood mom Doris Mann in POSTCARDS FROM THE EDGE with a screenplay by Carrie Fisher based on Carrie's first novel. 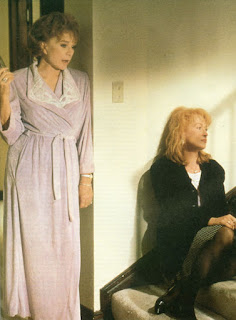 The Oscar nomination Debbie Reynolds got for THE UNSINKABLE MOLLY BROWN was the only one she received.  I said in my network TV film review that she deserved to get one for her terrific comedy/drama character role performance in Albert Brook's MOTHER.  She got raves from critics for that 1996 film.  But she  did not get an Oscar nomination. 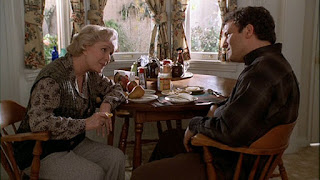 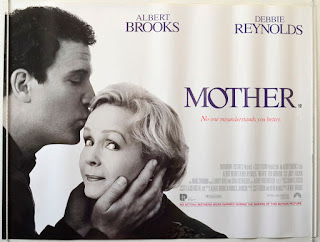 I often got the feeling that Hollywood took Debbie and Carrie for granted.  Have you seen POSTCARDS FROM THE EDGE?  Carrie wrote Meryl Streep to another Best Actress nomination.  If you've read the novel, you'll agree that Carrie should've been nominated for Best Screenplay.  Keeping the same characters from the novel, it's a different look at the same story.  Brilliant dialogue.  Memorable scenes.  In the book, Suzanne's grandmother is the relative we hear from the most.  Doris, her mother, is in less than 10 pages.  Carrie went deeper into her own relationship with Debbie for the screenplay.  The celebrated staircase argument scene in the movie ("It twirled up!") is not in the book at all.

But Quentin Tarantino won a Best Original Screenplay Oscar for 2012's DJANGO UNCHAINED even though his film was inspired by 1966 foreign western called DJANGO.  Tarantino's film had a cameo appearance by Franco Nero, the star of 1966's DJANGO.  Go figure.

With Carrie's talent as a screenwriter and a novelist coupled with her lead actress work in the original STAR WARS trilogy, three box office blockbusters that are truly iconic all over the world, she never got a star on the Hollywood Walk of Fame.

As for Debbie, she dynamically and selflessly toiled for years and years to preserve Hollywood history starting at a time when shoe salesmen were becoming studio heads.  She often went broke collecting classic Hollywood costumes from classic films.  But the Hollywood that would give $20 million to Adam Sandler to make another shitty comedy would not help Debbie with her Hollywood memorabilia museum.  In the early, dark days of the AIDS crisis, there were two Hollywood female stars who jumped right in to help and raise money -- Elizabeth Taylor and Debbie Reynolds.  Debbie didn't get the headlines that Elizabeth did, but she was there onstage entertaining at AIDS benefits when our government was doing nothing.

Hollywood should have given Debbie Reynolds a special Oscar around the time MOTHER was released.  She was Hollywood royalty.  Debbie was a Hollywood star who showed her musical comedy and dramatic talents over the years in films such as SINGIN' IN THE RAIN, THE TENDER TRAP, A CATERED AFFAIR, THE RAT RACE, THE PLEASURE OF HIS COMPANY, TAMMY AND THE BACHELOR, HOW THE WEST WAS WON, THE UNSINKABLE MOLLY BROWN, WHAT'S THE MATTER WITH HELEN?, DIVORCE AMERICAN STYLE and MOTHER.

But, years before Debbie got one, the Academy gave a special Oscar to Oprah Winfrey whose global success came from daytime TV.  Nothing against Oprah, but Debbie was a movie star before Oprah was born.

You'll see the side of Debbie Reynolds that her professionalism kept hidden.  You see her older, growing infirm and slowing down.  You see Carrie being protective of her mother's image.  The behind the scenes section at the SAG awards show will touch your heart.  Check your listings or go to HBO.com and look for upcoming repeats of BRIGHT LIGHTS. I'm so grateful to HBO for showing it.  The whole documentary makes you love Debbie Reynolds and Carrie Fisher even more.  They were two bright lights -- and I wonder if Hollywood truly appreciated how radiant and colorful those lights were.

If Debbie Reynolds and Carrie Fisher had played an extremely close mother and daughter in a movie like TERMS OF ENDEARMENT and if the movie ended with the daughter dying unexpectedly and the mother also dying unexpectedly the following day, critics would have snarked that it was a sappy, sentimental and totally unbelievable ending.  But those deaths happened in real life.