I enjoyed HIDDEN FIGURES so much that I saw it twice in the same weekend.  When I was a kid in Los Angeles, this is the kind of film that made for great family entertainment when the four of us got in the car and went to the drive-in movies, it's the kind of film that teachers took us high school students to see as a field trip during the week, and it's a movie that would make for a great date night.  At the SAG Awards, HIDDEN FIGURES won for Outstanding Cast in a film.  Octavia Spencer, a Best Supporting Actress Oscar winner for THE HELP, scored her second Best Supporting Actress Oscar nomination thanks for HIDDEN FIGURES.  Singer Janelle Monae delivers fine work as one of the NASA trio.  I wish Taraji P. Henson was in the Best Actress Oscar category for her fabulous, heartfelt performance as Katherine Johnson.  This is one of my favorite films released in 2016. 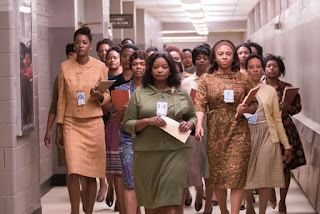 It is a movie that reminds us of accomplishments we made as a nation during the Obama administration.  In President Obama's farewell address, he said "Yes, we can."  That was a theme of his two terms in office.  That theme is a spirit of HIDDEN FIGURES. 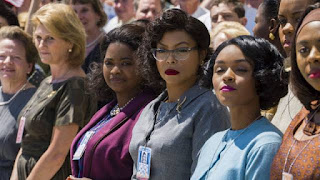 The story works on more than one level.  It's an uplifting American story based on fact and real lives.  It's significant, important Women's History and equally significant, important Black History.  I heard Lara Spencer on GOOD MORNING AMERICA say "Why didn't we know about this story before?" when she was praising the film.  Well..because the three central figures were African American women.  Their story is a reason why Black History Month was born -- because major accomplishments and achievements of African Americans were being overlooked and ignored. 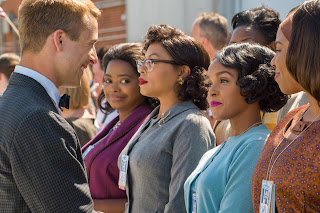 It's also a tale of underdogs who win, the kind of story we all can relate to, and it's told in a highly entertaining, energetic and touching way with three wonderful lead performances.  It's exciting.  These three black women, in a white male-dominated scientific environment, helped send an astronaut into orbit.  That was an extraordinary and potentially dangerous space mission for the United States.  That astronaut was John Glenn, the American hero who died last year at age 95.
We return to the early 1960s for this space & race story.  However, it feels timely and it's oh so relevant.  It nails those white-collar workplace humiliations many of us have experienced when not being promoted, not having our skills acknowledged, or working twice as hard yet making half as much as others.  Taraji P. Henson has a scene where her character is in the office full of men.  She doesn't even have equality at the coffee machine and she has to explain why she's always late returning from the ladies' room.  That scene took me back to some of my New York City TV years when I felt a racial inequality and a frustration.

When Taraji's character calls out that room full of men, I got tears in my eyes.  It hit that close to home.

Here's a clip from HIDDEN FIGURES.

Taraji P. Henson was a Best Supporting Actress Oscar nominee for 2008's fantasy/drama THE CURIOUS CASE OF BENJAMIN BUTTON.  If you know Henson primarily from her scene-stealing work as Cookie on the hit TV series, EMPIRE, or her previous work as a regular on the CBS series, PERSONS OF INTEREST, you need to see HIDDEN FIGURES. It displays her impressive range as an actress.

Here's a casting note:  Back in 2012, I interviewed Oscar winner Louis Gossett Jr in his Los Angeles home.  He was in the original Broadway cast of the groundbreaking 1959 play, A RAISIN IN THE SUN.   The play was written by the late Lorraine Hansberry.  Gossett and the rest of the lead Broadway cast members, including Sidney Poitier and Ruby Dee, repeated their roles in the film version.  African American playwright Lorraine Hansberry, the first black woman to write a play performed on Broadway, was a Civil Rights activist and a lesbian who was pro-gay rights before it became a national movement.

I asked Lou who should play Lorraine Hansberrry if there was a biopic done on her and, without even taking a breath, Lou Gossett immediately replied, "Taraji P. Henson."

I'd be thrilled to see HIDDEN FIGURES win the Oscar for Best Picture.