ALERT!  There's a spoiler in the question I pose in this blog post.  Do not read this item if you haven't yet seen LA LA LAND and do plan to see it.  If you have seen it and if you've seen a certain Martin Scorcese musical drama from the 1970s, then keep reading.  Several nationally recognized critics sent love notes in their reviews of LA LA LAND, a musical romance.  It's up for some top Golden Globe awards and many predict it'll rack up some major Oscar nominations later this month.  Emma Stone stars as Mia, the aspiring actress in Los Angeles. 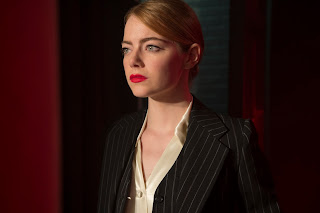 Ryan Gosling stars as the jazz musician who is just barely getting by financially in L.A. 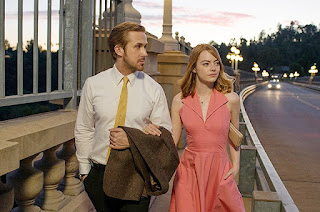 Their hearts connect.  Here's a clip from LA LA LAND.  The film was written and directed by Damien Chazelle.
In 1977, Broadway audiences saw Liza Minnelli star in a musical drama directed by Martin Scorcese.  Movie audiences saw Liza Minnelli in a musical drama that was also directed by Martin Scorcese.  NEW YORK, NEW YORK should have been in the Best Song Oscar category for the title tune.  The Frank Sinatra recording of "New York, New York" is now practically an anthem for New York City.  (The Oscar for Best Song of 1977 went to "You Light Up My Life.")  The title tune was not the only good original number written for Liza Minnelli to introduce in Scorcese's NEW YORK, NEW YORK.  As the band singer who moves on to a solo recording career, Minnelli introduced "But the World 'Goes Round."  The post-World War 2 singer, Francine Evans, taps into some recent personal heartbreak while singing.  This is one of my absolute favorite sections of Scorcese's film.
Now...for those of you who have seen NEW YORK, NEW YORK...think about what happens after that number.  A few years pass.  Hollywood signs the singer.  Robert De Niro starred opposite Liza Minnelli as a jazz musician.  The singer and the jazz musician were once in love.  While she made hit movies in Hollywood, he became the owner of a popular Manhattan jazz club.  The movie star has a new man in her life. The two former sweethearts, the singer/actress and the musician, wind up seeing each other one night for a few minutes before their goodbye and the end of the movie.

Isn't that pretty much what happens in the last 15 minutes of LA LA LAND starting with the number Emma Stone's character sings at the audition for a film to be shot in Paris?  Let me know what you think.