Didn't you feel like you'd lost a dear relative or a beloved friend when you heard news that Mary Tyler Moore had died?  That is the impact of TV, an intimate medium, when it gives us a most charismatic, skilled and relevant talent.  We go to the movies.  But TV....that's different.  We can have a TV in the living room, the kitchen or the bedroom.  Someone's voice and image is in our private space like a family member.  That TV talent, dropping by every week, can become a loved one.  Mary Tyler Moore was a loved one.  THE MARY TYLER MOORE SHOW was comforting must-see Saturday night entertainment that made you want to stay home and share watching it with family or friends.  Yes.  She made you want to stay home on a Saturday night and laugh with loved ones. 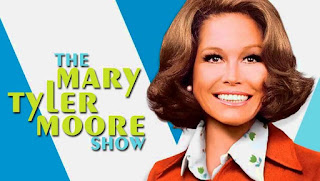 Watching TV is a different experience in these modern times.  But I loved those days of hanging with family and laughing.  As did millions of others, I had a crush on Mary as Laura Petrie on THE DICK VAN DYKE SHOW.  I was a kid in South Central Los Angeles. 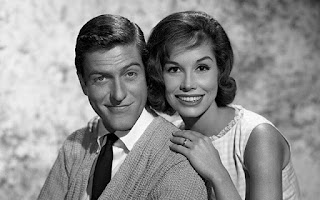 We fans really wanted to see Mary Tyler Moore's new sitcom.  Wow.  I remember the first episodes.  I remember when THE MARY TYLER MOORE SHOW really hit its groove in that first season.  I remember the original opening credits lyrics -- "How will you make it on your own?" and when it was changed to "Who can turn the world on with her smile?" 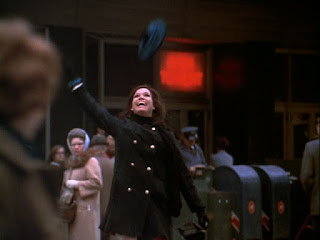 In an early episode, our family broke up laughing at a sophisticated running comment on racial images in TV.  We really appreciated that the THE MARY TYLER MOORE SHOW saw us.  In the early 70s, local TV newscasts were attempting to make their in-studio teams more racially diverse.  Keep in mind, America was coming out of the turbulent 1960s.  I went to high school in Watts, the Watts after the days of racial unrest that put our community in national headlines during the 1960s.  When a local TV newscast added a black reporter to the in-studio team, it was usually a black man -- who did sports.  A well-dressed black man with an Afro the size of a radar dish was added to our local NBC affiliate.  He did sports.  His name...Bryant Gumble.  John Amos played Gordy, a brawny athletic black man who's added to the WJM TV newsroom with Mary Richards.  A few employees assumed he was doing sports.  Wrong.  He was the weather guy.  And this was way before network and local TV newscasts started adding black broadcasters to do weather segments. THE MARY TYLER MOORE SHOW gave us a cool new image of black people in TV.  We loved the diversity of that TV sitcom newsroom.  White, black, young, middle-aged, slim, burly.  It looked real.  Mary Richards was a news show producer.  Mary Tyler Moore anchored the show with her sophisticated comic acting talent and excellent timing.  She didn't need punch lines.  Mary truly listened to her fellow actors and her reactions were hysterically funny.  The classic "Chuckles Bites the Dust" episode is a perfect example.  There's the untimely death of a co-worker.  Some folks made snarky wisecracks because he was a clown and he was killed by a circus elephant.  Mary calls them out on their wisecracks.  She is serious for most of the episode.  Until....the funeral.  We belly-laughed so hard that our sides hurt.  And Mary Tyler Moore has just a word or two in the famous funeral service scene.  We are watching her react.  We understand the build-up of tension and the release when the absolute absurdity of the tragedy hits her. 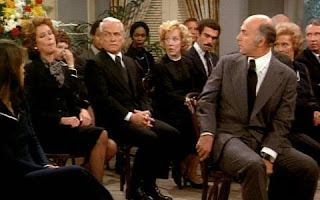 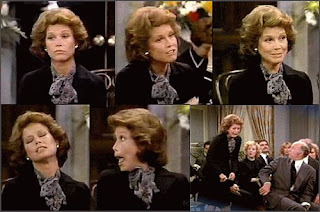 The show never tried to be edgy, snarky and hip.  The sitcom dealt with women's equality, marriage, divorce, birth, death, workplace integrity, accurate journalism, dating, gay siblings and job loss.  It dealt with all those topics with humor and humanity.  We loved Mary Richards' work crew, her neighbors and her best friend, Rhoda.  I have two very dear married friends.  Our friendship started at a party in the 1990s when we met and started talking about "Veal Prince Orloff," a dish in a classic episode of THE MARY TYLER MOORE SHOW.  That food dish, Mary's hair bump, the time she was in jail with two hookers, the first time she ever saw Sue Ann Nivens' bedroom, the time she and Lou Grant kissed....wow.  What a great sitcom character and what a great actress.  Her sitcom had superb ensemble acting with writing to match. 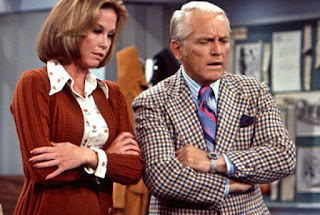 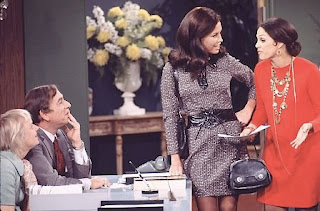 In my first professional TV job, I had the opportunity to interview Mary Tyler Moore.  She was promoting a new 1982 film she'd done with Dudley Moore.  It was one of my first interviews that aired nationally.  She was gracious, charming and forthcoming.  Everything you hoped she would be.

That national interview was some of the work that helped me get a job offer from New York City.  In the late 80s, during my VH1 years, I'd become buddies with Mary Tyler Moore's production partner.  One of the coolest things about returning his phone calls at the office was that Mary would often answer the phone.

I loved working at VH1.  Loved it.  Unfortunately, new management came in and decided to make changes.  It decided not to renew contracts of on-air talents and it started to lay-off some of the production talent.  A few months before my contract ended in 1990, I returned a call to Mary's production partner.  I'd told him what had happened.  Mary answered the phone and said that she'd heard the news. 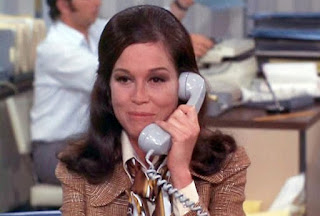 "Do you know you can apply for unemployment?" she asked.

I didn't know.  It hadn't occurred to me.  I'd never been on unemployment.  Mary asked a couple of specific things about my contract and replied, "Oh, you can definitely get unemployment."  Then she told me what to do.

All I could think was "Oh my gosh...I am getting advice on my TV career....from Mary Richards!"

I took her advice and it helped me take care of myself.  Just a couple of weeks ago, I watched episodes of THE MARY TYLER MOORE SHOW.  They hold up.  I laughed as much as I did the first time I saw them many years ago with family and, later, with friends.

Many female TV anchors mentioned what a significant feminist role model Mary Tyler Moore was with her Mary Richards character.  Here's a bit of wonderful trivia for you.  The classic "Chuckles Bites the Dust" episode -- was directed by a woman.  Following in the pioneer footsteps of actress/director Ida Lupino was Joan Darling, an actress who, like Lupino, became a director of episodic television.  Joan Darling directed the "Chuckle Bites the Dust" episode, one of the funniest episodes in TV sitcom history. 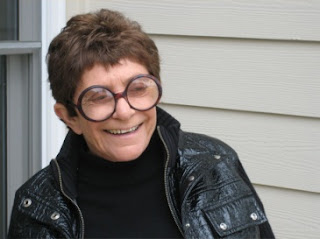 Isn't that cool?  To leave the world with quality work, work that "turns the world on with her smile"....man, what remarkable legacy. Thank you, Mary Tyler Moore.
at January 26, 2017