This is an intelligent, provocative, action-packed new series that deserves attention.  I had the fine opportunity to interview the producers and cast members before the premiere of the first season.  OUTSIDERS on cable's WGN America got renewed for a second season.  The new season starts next week on Tuesday.  The first season plus previews of the upcoming new one air today, Saturday, on WGN America.  So, I feel that today is a good time to repost interviews I did for premiere of Season One. 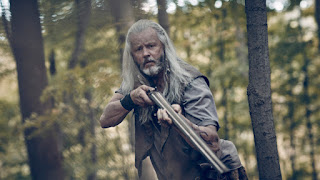 The Farrells may just seem like a bunch of bad-ass hillbillies who live on a Kentucky mountaintop and want to be left alone.  But the show is more than that.  There's class struggle, drug addiction, interracial lovemaking, racial prejudice, corporate greed, murder and intense fighting within the Farrell clan itself.  The Farrell clan is an American family with its own way of doing things.  It can survive without TV, the internet, cell phones and updates on the Kardashians. 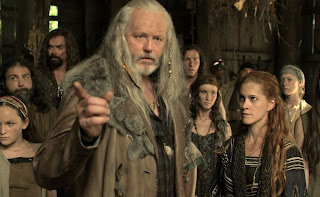 There may be major conflict within this independent, mysterious mountain family --but, fashion-wise, the Farrells always seem to be coordinated.

OUTSIDERS is one of those solid, sharp TV shows that I hope gets Emmy and Golden Globe attention this year.  It's a fine production with excellent writing, good acting, complicated characters, and socially relevant scripts that tell the story of an American family that lives off the grid.  I loved meeting two of its producers.  They are novelist Peter Mattei, creator of OUTSIDERS, and writer/director/producer Peter Tolan.  Tolan's history has a lot of comedy credits such as the MURPHY BROWN, HOME IMPROVEMENT and RESCUE ME sitcoms in addition to the hit comedy film ANALYZE THIS.  Here's my first meeting with those OUTSIDERS producers.

Burly David Morse, one of my favorite actors since way back in his NBC years on ST. ELSEWHERE, gets to exercise some new acting muscles as Big Foster, head of the Farrell clan. Australian actor Thomas M. Wright is remarkable as the grief-stricken and drug-addicted Sheriff Wade Houghton, a widowed single father.  Wade has a heart full of pain. The sheriff warns the corporate types who want to take over the Farrell mountain property that they don't know they're dealing with.  The corporate types want the coal rights to the mountain.

Catch up with the first season today, January 21st, on WGN America.  Enjoy the previews for the upcoming Season Two.