Spend the night of December 7th with Harvey Fierstein.  That's when HAIRSPRAY LIVE! airs on NBC.  In this live adaptation of the big Broadway hit musical -- a musical version of the John Waters' cult comedy, HAIRSPRAY -- Harvey recreates the role thousands and thousands of us loved seeing him do on Broadway.  He won a Tony for that 2002 performance.  The multi-talented and charismatic Harvey was on NBC's daytime show, ACCESS HOLLYWOOD LIVE on Nov. 29th to promote the upcoming show. The true gentleman explained that the film version of the Broadway hit, in which John Travolta put on dresses for the role Harvey did, was one thing.  The upcoming NBC version is different and will try to capture some of the live zest and attitude of the Broadway production.  Harvey wrote the script for the TV adaptation. 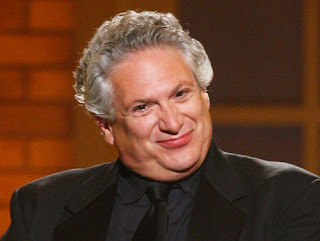 A few friends and I were lucky enough to see the original Broadway cast early in its run.  Let me tell you, the audience had one great big love affair with Harvey Fierstein as Edna Turnblad.  I am thrilled that Harvey gets to recreate the role for a whole new -- and bigger -- audience. 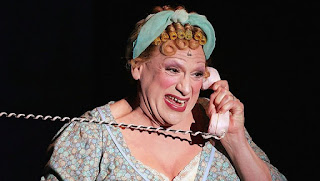 I've interviewed Harvey on TV a few times and loved every single chat.  He's wise, witty and loves to dish.  It's the wisdom of Harvey that always gets me -- the wisdom, the absolute respect and reverence he has for theater, his activism and his willingness to share his knowledge with someone who will listen.  He inspires you to be your true self, find your voice, give it clarity, make it colorful and contribute to the world around you.  That's some of the message of HAIRSPRAY LIVE! 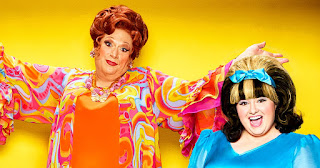 By the time I relocated to New York City for my first TV job in Manhattan, Harvey Fierstein was already a Tony winner.  As a playwright, his TORCH SONG TRILOGY won the Tony Award for Best Play on Broadway.  TORCH SONG TRILOGY also brought him the Tony for Best Actor of 1983.  In the play, he was Arnold Beckoff.  Arnold is a Jewish drag queen/singer in the New York City of the late 1970s/early 80s.  Arnold has a special man in his life.  Arnold also becomes a single parent raising a gay teenager.  Arnold has to deal with his obstinate and disrespectful mother who's visiting from Florida.  Harvey recreated his role in the 1988 film version of TORCH SONG TRILOGY co-starring Anne Bancroft and Matthew Broderick.

During my first New York City TV job, two years as an entertainment reporter for WPIX/Channel 11, I saw Harvey a lot doing what he could to help his brethren in the gay community during the dark days of the AIDS crisis.  He was a grassroots activist.  His were not red carpet appearances with a TV crew present.  He wanted to get the message out to his community to be aware, to be sexually safe, to be as informed as possible.  I participated in a confidential weekend medical seminar.  Held in conjunction with Manhattan's GMHC (Gay Men's Health Crisis) non-profit organization, this seminar sought 800 men to participate. The purpose was to promote safe sex practices and give medical information.  The GMHC tried hard to get public service mentions of this on local news programs.  I did a piece on it for WPIX after passionately pitching the gravity of it to my boss several times.  I did a piece on the upcoming seminar and attended the 1986 seminar.  On the panel were doctors from here in the U.S. and overseas.  Also on the panel...Tony winner Harvey Fierstein because he cared and he was/is a liaison to the gay community of New York.  He attended both days of the 2-day seminar.  We loved him.

In the early 1990s, I'd come off three great years on VH1 (where Harvey was a guest on my talk show) and I was working on a WNBC/Channel 4 live weekend local news program that had premiered in 1992.  About the November 20th weekend of 1993, my interview of Robin Williams aired.  He was promoting his soon-to-open comedy, MRS. DOUBTFIRE.

I'd also taped a very good interview of Harvey Fierstein.  He played the brother to Robin's character in the movie.  He's the make-up artist who helps him choose a temporary female identity. Harvey and I talked about the movie and working with Robin Williams, of course, and about barriers he had to break through in his career after he won the Tonys and starred in a movie.  He was not getting a lot of work because...well, let's just say his representation needed to be more enlightened about diversity.   Harvey's a writer and an actor.  A fine actor.  But if good scripts were being cast, Harvey would not get submitted to audition unless the script called for a "flamboyantly gay" character.  It was frustration many actors feel.  Many actors who are or aren't gay -- but are placed in a little box by people in the industry -- know that frustration.

The head of 20th Century Fox film publicity and Robin Williams' then wife were in the room for my conversation with Harvey and complimented me on a good interview.

My good interview of Harvey Fierstein didn't air that weekend in 1993 on the local New York City morning news program.  Why?  Because the WNBC news director -- who is long gone from the station -- said "I have a problem with him being openly gay."

I reminded him that Harvey won Tony Awards for playing an openly gay man on Broadway and for writing the play.  He still refused to air the interview.  Our interview was so family-friendly it could've aired on a Disney Channel.  But the WNBC news director had "a problem" with Harvey Fierstein being openly gay.  In 1993. I got more vocal about my displeasure with the lack of positive gay images on TV.  At the time in my personal life, I was caregiver to my partner who'd been diagnosed with full-blown AIDS.  I was advised by a few gay co-workers months earlier to keep mum about that for fear of losing my job.  Those were dark days.

Look at all the openly gay talent you see on TV now.  There's openly gay talent on WNBC news programs.  I am overjoyed that Harvey is doing HAIRSPRAY LIVE! on NBC.  And wherever that former news director is today....he should only stay there. I love actor, writer and AIDS activist Harvey Fierstein.  I am grateful for his presence. 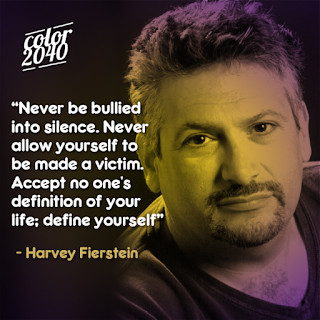