He's a handsome and appealing movie star, the kind that top Hollywood studios mass produced in the 1940 and 50s.  Notice that I wrote "movie star" instead of "actor."  The reason for that is that I always catch him acting in his performances.   And I don't mean that as a slap.  He gives me the vibe of basically being just a hot-looking, cool dude who makes moves.  You really don't go to a Brad Pitt movie to see him "act" the way you go to see Daniel Day-Lewis or Sean Penn act.  You go to be entertained by Brad Pitt the movie star.  Did you see TROY? There was handsome Brad Pitt in a Trojan War epic as Achilles, the Greek hero.  Did you hear Brad speak?  He sounded like he was from the Beverly Hills, California section of ancient Greece.  And that's why his supporting cast had the likes of Peter O'Toole, Julie Christie and Eric Bana.  They did the real acting while Brad looked handsome.  That same format is at play in his new feature. 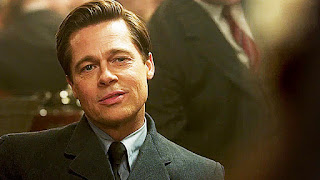 In ALLIED, the action-packed World War 2 spy thriller, we have Brad Pitt and the most excellent Marion Cotillard as agents on a secret mission to kill Nazis.  They meet in Casablanca where they are ordered to pose and man and wife.  They carry out their mission behind enemy lines.  Brad has to speak French in his role.  Marion Cotillard, Best Actress Oscar winner for playing the late legendary French singer Edith Piaf in 2008's LA VIE EN ROSE, was born and raised in Paris.  She already knows how to speak French.

The two secret agents wear fabulous clothing.  The costume design calls to mind Hollywood classics of the 1940s.  They have steamy sex during a sandstorm.  The two people with fake identities fall in love.  They get married and have a baby.  She gives birth during a London blitz and her screams can be heard over the bombs.  Things quiet down for them in London until...Max the intelligence officer (Brad) is informed that his French Resistance fighter wife (Marion) may really be...a Nazi spy.  Is she or isn't she?

Here's a trailer for ALLIED.


ALLIED would've probably been a big hit with young audiences back in the 1970s.  Why?  The movie CASABLANCA was hugely popular on college campuses.  I attended Marquette University in Milwaukee, Wisconsin.  Every single time CASABLANCA was rented and shown on campus, the audience was packed and there were always cheers and enthusiastic applause when the Claude Rains character orders "Round up the usual suspects."  That was the decade in which young film fans fell in love with CASABLANCA.  You see the CASABLANCA love in Woody Allen's 1972 hit, PLAY IT AGAIN, SAM. 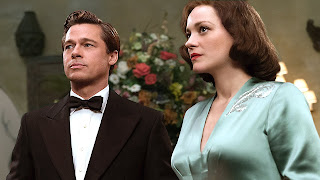 ALLIED is great eye-candy.  The production design and costumes call to mind Hollywood's classic era -- the era in which Warner Bros. made CASABLANCA.  However, there are elements of this entertaining movie that would've made it perfect fodder for an excellent spoof with guest stars on THE CAROL BURNETT SHOW.  There's a nighttime scene in which Max (Brad Pitt) sneaks into Nazi territory to interrogate a drunken Frenchman in jail.  It's not a funny scene, but I giggled because the Frenchman was so...so Harvey Korman, if you know what I mean.  And then there's Brad trying to emote and speak French at the same time.

I already mentioned Brad as an ancient Greek in TROY.  Did you ever see Brad as Heinrich, the Austrian mountaineer in SEVEN YEARS IN TIBET?  I watch that film to feel better about myself.  It empowers to know that my German accent is better than Brad Pitt's.

I'd like to know what co-star Marion Cotillard was thinking in their scenes when Brad was speaking French.  She must've wanted to turn to him like Dianne Wiest in BULLETS OVER BROADWAY and say, "Don't speak. Don't...SPEAK."

The British actors in the supporting cast around Brad are very good.  Cotillard is wonderful.  The story does have suspense.  Halfway through it, I could not figure out if she was or wasn't a spy.  I was caught up in the mystery. ALLIED was directed to Robert Zemeckis.  He gave us FORREST GUMP, CAST AWAY, FLIGHT and BACK TO THE FUTURE.  He knows how to spend money and get the most out of special effects.  There are thrilling special effects in the wartime scenes.  There's suspense in this romantic thriller.  The production values are rich.  Brad Pitt is once again a hot-looking dude.  If only the movie had more a Hitchcock touch and less of a possible Carol Burnett spoof quality.