Some of the brightest stars and greatest artists of classic Hollywood films were not seen on the screen.  They were in the production team behind the camera.  Such is the case with the often overlooked yet highly entertaining and action-packed MGM melodrama, GREEN DOLPHIN STREET released in 1947.  Jazz singers and musicians know the song "Green Dolphin Street."  It originated as the theme for this movie. 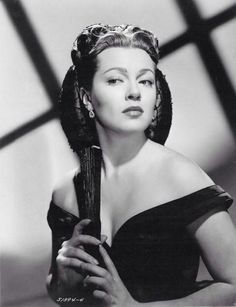 The top star is Lana Turner at the height of her MGM fame.  This film is not often mentioned when folks talk about Lana Turner features.  However, it's one that shows she was more than just a glamour girl.  GREEN DOLPHIN STREET, like THE BAD AND THE BEAUTIFUL, boasts one of her best dramatic outings.  In fact, if you've seen Lana as Georgia Lorrison in Vincente Minnelli's THE BAD AND THE BEAUTIFUL, GREEN DOLPHIN STREET is exactly the quality of film Georgia would've made after she established herself as a top Hollywood star, one that had finally gotten over Jonathan Shields (played by Kirk Douglas). 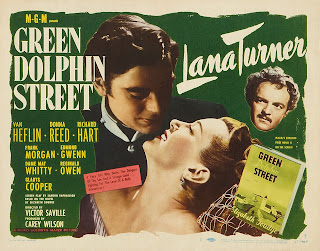 As for this story:  It takes place in 1840.  It's a historical costume drama.  We're taken to an island in the English Channel.  A wealthy, loving older couple has two lovely daughters.  One with a great head for business is played by Lana Turner.  The other sweet daughter is played by the perfectly cast Donna Reed.  The two sisters have a romantic eye for the same man.  He has a romantic eye for one of them.  But he drinks.  When he sends a letter asking for the hand of one in marriage, he writes the name of the wrong sister.  Lana, as the more voluptuous and business-savvy sister, gets the marriage proposal and eagerly sails off to accept.  The other sister appears happy but she's really crushed. The sisters were close. 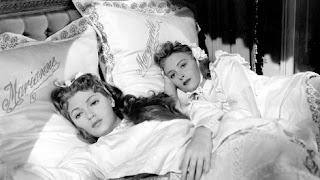 That's just the beginning.  Later, in New Zealand, there's an earthquake as major as the one that some think sank the Lost Continent of Atlantis, there's a native uprising and there's a man secretly in love with the Lana Turner sister knowing that his friend married her by mistake. 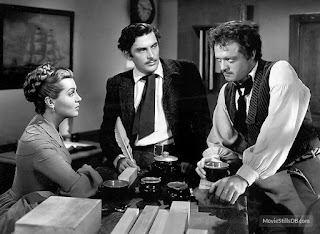 There's good high drama in this movie.  Back at the English Channel, the mother lies deathly ill.  A priest has been called.  Gladys Cooper, so excellent as the manipulative and domineering mother opposite Bette Davis in NOW, VOYAGER, is the other kind of mother in GREEN DOLPHIN STREET.  She's warm, loving, tender and truthful.  She has a deathbed confession scene that is just beautiful.  It's beautifully acted and it's beautifully shot by master cinematographer George J. Folsey.
I first saw this movie on local TV when I was in high school and I couldn't take my eyes off the gorgeous composition of this shot and the lighting.  This scene with Gladys Cooper, Donna Reed and Edmund Gwenn is my favorite one in the whole film.

The dying mother knows that her dear daughter feels her life no longer has meaning now that the man she felt she loved married another.  Someone she also loves.  He married her sister.  The mother tells her daughter something about her young life and love that her daughter never knew.  Her father is present too, listening to his dying wife's revelations. 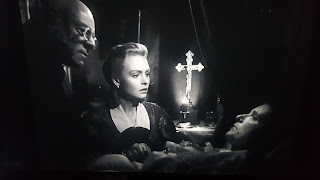 That crucifix, that candle will be symbols in the daughter's life to come.  She'll feel lost and wind up here. 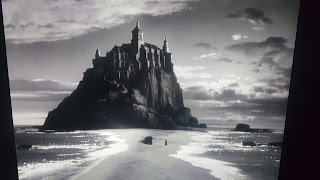 And then, to keep from drowning, she will have to climb up the inside of a large rock to safety. 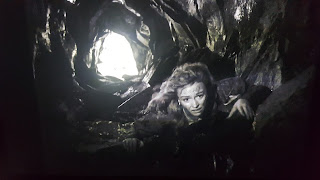 There will be a candle in her future and her spirit will find light again. 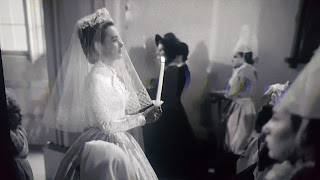 There's wonderful cinematography throughout this film.  That one deathbed scene shot --- wow.  It get me every time.  So simple, so beautiful, so rich in soulfulness.  I love that shot and that entire scene in GREEN DOLPHIN STREET. 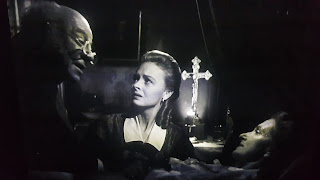 Cinematographer George J. Folsey's other credits include THE GREAT ZIEGFELD, MEET ME IN ST. LOUIS, THE CLOCK and ADAM'S RIB.