On Ryan Gosling in THE NICE GUYS

He's got one Best Actor Oscar nomination to his credit.  His powerful performance as the drug addicted middle school teacher in HALF-NELSON earned him that nomination.  I'm sure he's got another one coming somewhere down the line.  Ryan Gosling is mighty fine actor.  Count me in as a proud member of his fan club.  He was in THE BIG SHORT, a nominee for Best Picture of 2015.  He played a hyper Wall Street dude who delivered my favorite line in the movie:  "I'm jacked to the tits!"  It's the way he delivered the line that makes it my favorite.  Now Ryan Gosling stars in a colorful film that's been getting valentines from movie critics.  There's a lot of buzz about this modern-day musical set in Los Angeles called La La Land.  There was hardly any buzz about his summertime movie this year.  It came and went.  It's a cop buddy/crime comedy called THE NICE GUYS.  Ryan Gosling plays a hot mess of a single dad private eye in 1977 Los Angeles. 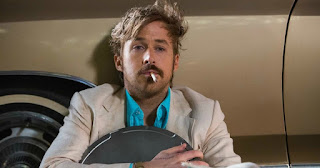 Holland March (Gosling) is a bit on the clueless side and he tends to get scared easily.  When he's scared, he has a tendency to shriek a little.  He winds up getting punched out then partnering with a bounty hunter named Jackson Healy.  This enforcer is played by Russell Crowe.

Crowe is sort of the cranky papa bear in this movie that was written and directed by Shane Black.  Crowe is burly here.  He has a belly on him and it works well for the character.  Keep in mind that Crowe has been at this game a long time, starting in TV and film in Australia.  He won the equivalent of the Australian Best Actor Oscar for his blistering performance as the suburban neo-Nazi skinhead in the 1992 Australian film, ROMPER STOMPER.  He really clicked with American audiences in the outstanding 1997 mystery crime thriller, L.A. CONFIDENTIAL.  He won the Best Actor Oscar for the historical epic released in 2000, GLADIATOR.  You can cut him some slack for the papa bear belly.  It doesn't take away from his acting chops. 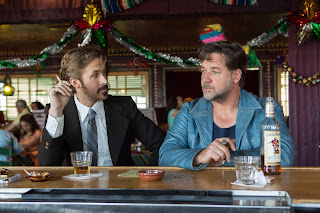 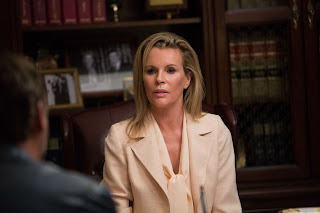 I still feel that the biggest mystery about that terrific mystery/crime drama is...how was Kim Basinger the only member of that remarkable cast to get an Oscar nomination?  She won for Best Supporting Actress.  Here's a trailer for THE NICE GUYS.


What I did like the most about THE NICE GUYS is Ryan Gosling's performance as the dorky private eye.  Gosling has a gift for physical comedy.  There was something about his performance that seemed familiar to me. The way he played Holland at times reminded me of someone else.  Then comes a scene in which he finds a dead body in the brush outside a huge home in the L.A. hills.  The way Holland reacted to the discovery made it all clear.  It will be clear to you too if you're of a certain age and are a fan of some classic films.

Ryan Gosling was totally being Lou Costello in ABBOTT AND COSTELLO MEET FRANKENSTEIN.  His bit with that dead body proves it.

I saw THE NICE GUYS as a weekend rental recently with two good buddies I was visiting.  It's not a great movie but it sure was an entertaining weekend rental with some very funny moments -- all of them involving Ryan Gosling.  THE NICE GUYS blends sleaze with a touch of slapstick. Also, it's the first of Gosling's two "the girl in the yellow dress" films of 2016. 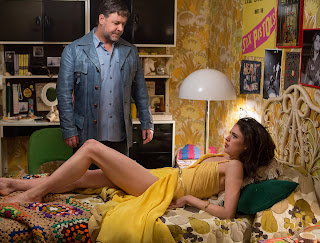 Because of all the glowing reviews I've read about his new movie, I really want to see Ryan Gosling and Emma Stone in La La Land.  Here's a trailer.