I loved the teen comedy SUPERBAD.  Silly, yes it was.  But that 2007 movie was big fun and made me laugh.  If some hightone moviegoers and critics didn't feel the same way and regarded the cast members as being just goofy kids in a teen comedy, the cast members got the last laugh.  Two of them now see the words "Oscar nominee" written before their names in print entertainment reports. 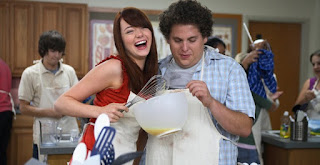 Jonah Hill with his Chia Pet hair now has two Oscar nominations to his credit for Best Supporting Actor.  I noticed the actress who played his high school classmate and crush in SUPERBAD. 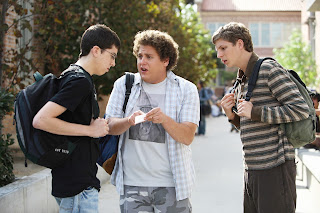 The appealing and talented young actress was Emma Stone.  She now also had an Oscar nomination to her credit. She got a Best Supporting Actress Oscar nomination for her performance in BIRDMAN, Oscar winner for Best Picture of 2014.

Emma Stone starred in another teen comedy.  When it was on DVD, a few young buddies of mine urged me to see it.  So, one weekend I caved in and rented the Emma Stone movie they recommended.  I thanked each one for the recommendation.  What a clever teen comedy. 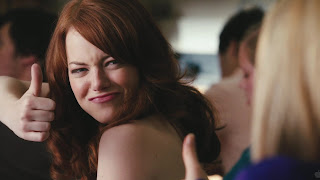 And how refreshing to see a teen character who loved being with and talking to her parents.  Her parents knew all about her high school reputation dilemma. 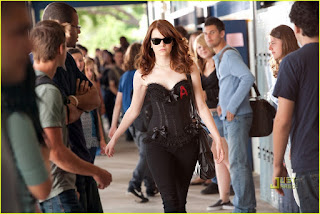 Emma Stone now stars in a musical that's gotten fabulous reviews from critics, it got her a Golden Globe nomination and many critics predict that the musical, called LA LA LAND, will be an Oscar nominee for Best Picture next month.