Around this time of year while you're relaxing, you might want to put an entertaining movie with a warm Christmas holiday tone to it.  I have a romantic comedy to recommend.  It's got a delightful supporting role performance that got overlooked and wasn't included in the trailer.  The movie is 2006's THE HOLIDAY.  This is a romantic comedy written and directed by Nancy Meyers.  That means you're assured laughs, white folks having wacky times on the bumpy road to love, plus eye-candy visuals that make the movie look like a video catalogue for high-end home furnishings, clothing and accessories. 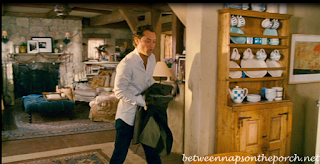 Another thing that gives it the Nancy Meyers touch -- THE HOLIDAY runs about 2 hours and 15 minutes. 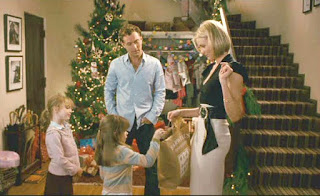 That's about a good 20 minutes longer than it needs to be.  But that's what makes Nancy Meyers films work so well as in-flight movies. 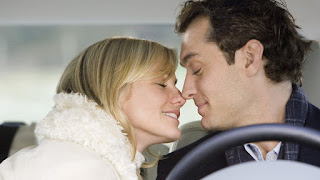 The stars are Cameron Diaz, Kate Winslet, Jude Law and Jack Black.  Let me tell you right now that this film made me look at Jack Black in a different way.  He's mature and more sophisticated here.  Not the hyper, in your face hipster of previous comedies.

As for the plot...well, just look at the trailer.  It's the kind of comedy that has a young, slim, very upscale blonde from sunny Hollywood wear designer high heels to walk in the snow -- making it possible for you to laugh when she wipes out while pulling her expensive carry-on luggage. 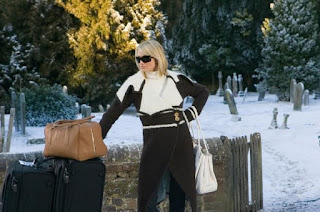 Here you go.  Play the trailer.
The best part of this movie is not even in the trailer.  Veteran actor Eli Wallach gave a hip, totally cool and absolutely wonderful performance as the wise Hollywood insider.  I was working on national radio at the time I saw this movie.  I was on Whoopi Goldberg's weekday morning radio show.  She loved Eli Wallach.  Heck...what was there not to love?  The movie audience loved Wallach when I saw THE HOLIDAY.  During my on-air film review, I told Whoopi that I hoped Eli Wallach would get a Best Supporting Actor Oscar nomination for THE HOLIDAY. 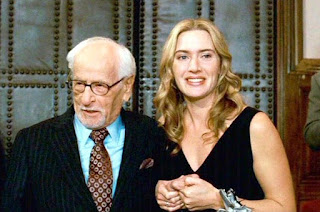 He didn't get one.  But, fortunately, the Academy was wise enough to give him a well-deserved special Oscar for career achievement before his death in 2014.  Are you ready for this?  Eli Wallach never, ever got an Oscar nomination in his entire film career.  That stunned me.  Think of the great work Eli Wallach did in Elia Kazan's BABY DOLL,  the original THE MAGNIFICENT SEVEN, LORD JIM starring Peter O'Toole, HOW TO STEAL A MILLION starring Peter O'Toole and Audrey Hepburn, CINDERELLA LIBERTY and many others through the years.

Along with Wallach, you'll see another familiar veteran face in THE HOLIDAY.  Remember the classic sitcom, MAUDE, starring Bea Arthur?   Bill Macy who played Maude's husband, Walter, is in THE HOLIDAY too.

Again, if you want to rent some fluffy movie entertainment with a Christmastime flavor and a fabulous supporting role performance, try THE HOLIDAY.  Eli Wallach cheerfully stole the film.  Merry Christmas.
at December 22, 2016