Back in 2017, I heard reputable veteran film critics on the KPCC Friday edition of AirTalk hosted by Larry Mantle praised a new indie film called THE RIDER. This was during the radio show's hour called FilmWeek. Based on their recommendations, I watched THE RIDER, a very American tale written and directed by Chloé Zhao. The film is about a new definition of masculinity that takes place in Heartland America. A young cowboy suffers a serious head injury while riding. During recovery and afterwards, he has to redefine what masculinity is within himself. The film moved me so that I watched it and then watched it again the next day. In NOMADLAND, writer/director Zhao gives us another American character whose life is in need of redefinition. This character, Fern, is beautifully played by 2-time Best Actress Oscar winner, Frances McDormand. 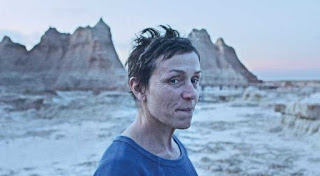 Fern, a widow who deeply loved her husband, finds her small town, pleasant life suddenly upended. She worked for the main company in town. The company goes out of business during the Recession leaving all employees out of work. The town goes broke to such an extent that it loses its zip code. Fern takes to living in a van and traveling the western part of the country. There are great vistas of mountains and fields and deserts. Fern is a whiz. She's self-sufficient, she used to tutor schoolkids, and she's got skills that get her hired for a time at Amazon. As she says to one former student she runs into while shopping, "I'm not homeless, I'm just house-less." She is a nomad. And, along the road, she meets other nomads and hears their stories as they bond. To be suddenly out of work and forced to part with many longtime belongings before hitting the road in search of new employment is a story familiar to many of us within the last 10 years. It's familiar to me. It happened to me 10 years ago. I lost my once-affordable studio apartment in New York. I moved in with a friend in San Francisco and sought employment there. No luck. Then I went to the Sacramento area, back to New York City for a while, then to Connecticut, New Jersey and back to New York City for a few weeks where I got work as a dogwalker. I lived with different friends and a relative.

On the road, without the attention grabbers like the internet, television and such, Fern can hear her innermost thoughts, she can allow true feelings to surface and give voice to them. McDormand does not have the amount of dialogue she had in films such as MISSISSIPPI BURNING, FARGO, ALMOST FAMOUS and THREE BILLBOARDS OUTSIDE EBBING, MISSOURI. Nevertheless, she expresses a great deal with the tone of her voice, her body posture and, especially, her eyes. You catch her various emotions and she changes along her new road in life. Just like THE RIDER, this is a quiet yet strong film, full of grace and a certain reverence for its lead character. There are middle-aged people in this film who made their acting debuts as nomads and they are excellent. There's also the fine actor David Strathairn as a nomad who becomes romantically taken with Fern's independent spirit. Here's a trailer.

NOMADLAND introduces us to working class people who believed in the American Dream, a dream that didn't quite come true. So they persevered and moved on, helping each other along the way. Watching Fern go west and encounter hardship, friendship, and new feelings in family ties make this a very worth-while road movie to see. Brava to writer/director Chloé Zhao. She did a great job.. NOMADLAND is a Fox Searchlight film.