My Hollywood Request for Black Actresses

Recently, I my sister and I gleefully laughed out loud, yet again, at the comedy brilliance of Judy Holliday in BORN YESTERDAY (1950). She won the Best Actress Oscar for playing the dumb blonde girlfriend of a bully racketeer boyfriend with dark political ambitions. When she realizes that he's limiting her personal freedoms like a fascist leader, she gets smart and makes her own personal declaration of independence.

What does that have to do with Black -- and Latina -- actresses? Let me take you for a short walk down Old Hollywood Lane. Claudette Colbert won the Best Actress Oscar for Frank Capra's screwball comedy, IT HAPPENED ONE NIGHT (1934). Diane Keaton won the Best Actress Oscar for Woody Allen's classic comedy, ANNIE HALL (1977). Mira Sorvino won her Best Supporting Actress Oscar for the Woody Allen comedy, MIGHTY APHRODITE (1995). Dianne Wiest won both her Best Supporting Actress Oscars for Woody Allen comedies -- HANNAH AND HER SISTERS (1986) and BULLETS OVER BROADWAY (1995). Barbra Streisand was very funny in the first half of the musical comedy, FUNNY GIRL (1968), and took home a Best Actress Academy Award for her work.  Enter Whoopi Goldberg. 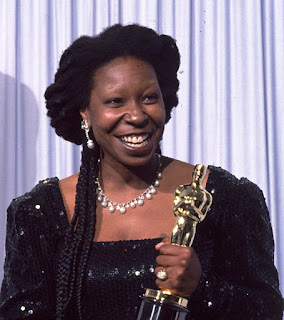 I can only think of one Black actress who got nominated and won an Oscar for a comedy performance. That is Whoopi Goldberg who got the second of her two Oscar nominations for the comedy/fantasy/murder mystery, GHOST (1990). She played the sometime con artist who truly possesses a psychic gift and is in contact with the spirit of a murdered husband. She redeems herself by helping his grief-stricken widow.

I worked with Whoopi for two years on-air. This was when she had a weekday morning radio show out of New York City that aired nationally. She brought me into the show to do entertainment reports -- mainly reviews of new films and recommendations of classic films. So, I would go to a radio studio in Manhattan and sit thigh-to-thigh next to and perform with a show biz icon. My favorite experiences during those fun years, 2006 to 2008, were when Whoopi pulled me aside and talked to me not as star to non-star, but as two Black people trying to keep employed in the entertainment industry. She revealed to me her huge disappointment that she could not get an audition for GHOST. She told me that the producers, the same team that gave us the comedy hit, AIRPLANE! (1980), had auditioned just about every other Black actresses with a Screen Actors Guild card, but would not okay her for an audition. And she had a Best Actress Oscar nomination to her credit for THE COLOR PURPLE (1985) plus her hit one-woman 1985 Broadway comedy show produced by Mike Nichols.  She then told me that when GHOST star, Patrick Swayze, got wind of this, he took action. He told the producers to let Whoopi audition or he was dropping out of the project. She auditioned, she got the role, she won her Oscar.

Let's look at some of the roles that got Black actresses Oscar nominations:

Whoopi Goldberg and Oprah Winfrey: Worked as maids in THE COLOR PURPLE (1985)

How I'd love to see a Black actress be offered and, later, be Oscar-nominated for a sophisticated comedy role like Dianne Wiest played in HANNAH AND HER SISTERS and BULLETS OVER BROADWAY or the fabulously energetic and glamorous one Rosalind Russell gave in 1958's AUNTIE MAME (Best Actress nominee). Or like Goldie Hawn -- Best Supporting Actress Oscar winner for the 1969 comedy, CACTUS FLOWER, and Best Actress Oscar nominee for the 1980 comedy, PRIVATE BENJAMIN.

Rita Moreno said in a TCM interview that she had no good Hollywood offers for seven years after she won the Best Supporting Actress Oscar for 1961's musical drama, WEST SIDE STORY. Like many Oscar-nominated Black actresses, she had to turn to TV for steady employment. She also did Broadway work and won a Tony for her performance in the comedy, THE RITZ. She repeated her role in the 1976. Personally, I would've graced Rita Moreno with a second Oscar nomination for her daffy performance as the Puerto Rican singer and Broadway hopeful who has more ambition than talent. She works as a headliner in a deluxe gay bathhouse in New York City. Here's a clip of Rita as Googie Gomez singing for the boys in THE RITZ.

Hollywood, please start giving our Black and Latina actress some good, upscale comedy roles. Have you seen Leslie Jones in the female remake of GHOSTBUSTERS? She'll be in COMING TO AMERICA: 2. Did you see Kerry Washington as one of the funniest SATURDAY NIGHT LIVE guest hosts of 2013? Did you see Alfre Woodard exercise her comedy chops as the harried suburban L.A. wife trying to make the perfect Thanksgiving dinner in WHAT'S COOKING? (2000). Have you seen the TV sitcom performances of Yvette Nicole Brown on COMMUNITY, Tracee Ellis Ross and Jenifer Lewis on BLACK-ish? There's a lotta talent out there to consider for good film comedy roles.