William Shatner as THE INTRUDER (1962)

He claims to be from Los Angeles. He's traveling via bus to a small Southern town. He's handsome, clean cut, young and wearing a white suit. He's a White guy. He appears to be a true and charming gentleman. He checks into a local, inexpensive hotel where the kindly old lady who works the front desk casually uses a racial slur when referring to one of her employees. The man in the white suit smiles when she says what she says. Later, after a friendly breakfast with a married couple, the stranger in the white suit catches a cab and asks the driver, "You know where n****rtown is?" The driver does. The stranger is taken there. This stranger is THE INTRUDER, a racist who says his job is "social worker," but he's really in town to fan the flames of racism against school integration that's just been ordered by law. The mysterious, manipulative and morally bankrupt stranger is played with great strength by William Shatner four years before we saw him on the NBC series that made him a pop icon, STAR TREK. Nowadays, we love the way Shatner lampoons his own TV celebrity. On March 26, he and Jean Smart make their debut on a new sitcom called SENIOR MOMENT. But, back in the day, Shatner did some impressive dramatic work -- like in THE INTRUDER, a 1962 release. The year before, Shatner held his own opposite heavyweight veteran Spencer Tracy and other top stars in JUDGMENT AT NUREMBERG. Shatner had a supporting role in that film which took the Oscar for Best Actor (Maximilian Schell) and was a nominee for Best Picture. THE INTRUDER was a flop at the box office but, I feel, it rates re-appreciation today. It's a tight, intense and relevant film. I saw it a few years ago and blogged about it. However, I watched it again recently and it had even more sting because of the early January takeover of the Capitol Building in Washington, DC. Shatner delivers a fierce, memorable performance. 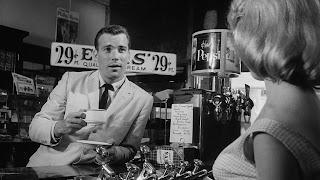 Why did THE INTRUDER flop at the box office? Audiences probably weren't ready to face its blunt, direct racism during those turbulent years of the Civil Rights movement. THE INTRUDER was produced and directed by Roger Corman at a time when he was very popular for giving the public entertaining and modesty budgeted horror or teen rebel flicks starring Vincent Price and introducing new talent such as Jack Nicholson, Bruce Dern and Peter Fonda.

Adam Cramer, the intruder, connives the townspeople to revolt against the court-ordered integration telling them such a legal act is not democratic. Cramer is also against freedom of the press. A local editor with a teen daughter who attends the newly-integrated school, is not personally for integration but he supports it because "it's a law." Cramer opposes him while making sexual advances to the editor's teen daughter.

Cramer warns the White townspeople against the NAACP. He tells them it's associated with Communists and Jews. When he speaks in public, his body language is reminiscent of a Mussolini or Hitler. He will incite the crowd to some KKK mob violence that leads to a fatal Black church bombing. Keep in mind this movie came out in 1962. In 1963, there would be the racist bombing of a Black church in Birmingham, Alabama that killed four little girls -- a racist American crime that would make international headlines. 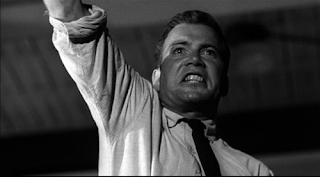 Director Roger Corman realized that bigotry, as he Rodgers & Hammerstein song in SOUTH PACIFIC lyrically states, "...has to be CAREFULLY TAUGHT." There's a scene in which an innocent Black student has been accused of raping a blonde girl who also attends his school. A crowd with a lynch mob mentality, headed by Doug Cramer, corners him on a playground. Notice that there are youngsters in that threatening crowd. 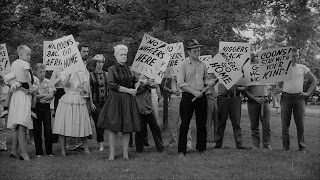 Thank you for THE INTRUDER, Roger Corman. Today, your 1961 deserves attention and discussion. It is still a relevant, intelligent piece of work with fine performances.

THE INTRUDER is on DVD. You can also see it on YouTube. The film runs about 85 minutes. Here's a clip.