Queen Latifah is THE EQUALIZER

A popular 1980s CBS series starring British actor Edward Woodward that inspired two movie versions starring Denzel Washington, THE EQUALIZER has been rebooted for CBS. This time, the Equalizer is being played by a woman -- Queen Latifah. I read a review of the premiere episode in The Hollywood Reporter. The critic pretty much concentrated on the script which he/she found average and felt the episode was entertaining but gave us nothing new. I have a different opinion. First of all, Queen Latifah is that rare Black actress who received an Oscar nomination and then didn't have to go to TV for steady employment because Hollywood offered no follow-up scripts. As I've mentioned in previous posts, Cicely Tyson, Diahann Carroll, Angela Bassett, Alfre Woodard, Taraji P. Henson, Gabourey Sidibe and even Viola Davis had to turn to television when Hollywood disappointed them after they achieved an Oscar nomination. Except for Viola Davis, all those other Black actresses have only one Oscar nomination to their credit. White actresses like Julia Roberts, Amy Adams, Michelle Williams and Jennifer Lawrence had their choice of script offers after receiving their first Oscar nomination and went on to get other Oscar nominations. Queen Latifah was a Best Supporting Actress nominee for the musical CHICAGO (2002). After that, she starred on the big screen in BEAUTY SHOP (2005) and LAST HOLIDAY (2006) which is a remake of a classic 1950 British film of the same name with Latifah portraying the lead character previously done by Alec Guinness. She was very good in the under-seen comedy/drama STRANGER THAN FICTION (2006) with Will Ferrell and she played Motormouth Maybelle in the musical HAIRSPRAY (2007). Now she stars in a crime/action TV series. 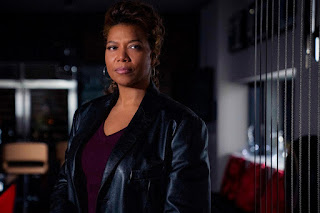 In the genre of action/heroine features, few Black women have gotten those lead roles. Queen Latifah has such a lead role. She's Robyn McCall, an Army veteran who served in the Middle East and then worked for the CIA. She left that organization after something went wrong on a mission in Venezuela. She's still valued by the CIA. Today she's a single and unemployed mom with a teen daughter. Robyn is contacted secretly to do some Equalizer work. Robyn's motto will be: Got a problem? Odds against you? I can help. In the premiere episode, she helps a young Black woman who witnessed a murder dodge the clutches of the bad guys. There is a touch of the NCIS franchise in this reboot, but you are getting something vastly different with a single Black mother who's a war vet in the lead role. She doesn't have a British demeanor and accent like Edward Woodward. She's more vulnerable than the constantly stoic Denzel Washington. There's a fine scene near the end in which Robyn and her daughter, a smart kid who did something highly irresponsible, are seated in car outside a women's detention center. Robyn explains to her daughter why she got into the army and why young Black women don't really have the luxury to be irresponsible in America. She points to the detention center. It's a strong and meaningful scene. Since her Oscar nomination, Queen Latifah's acting has grown richer. As Robyn McCall, our new Equalizer, there's something complicated behind her eyes. There is the Latifah swagger in the action scenes. There's a;so complexity in her dealings with her daughter. The movies I mentioned in the first paragraph that Latifah did after CHICAGO are all comedies. The dramatic premiere episode of THE EQUALIZER had her in fine form and doing some of her best acting. She's also one of the executive producers for the series. 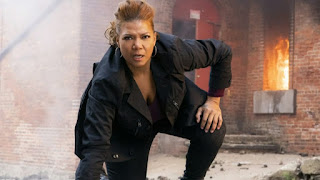