I'm a baby boomer. I grew up loving February 22nd. Why? Because it was George Washington's Birthday and that meant a day off from school. George Washington, our first American president and the man who, in his youth, replied "I cannot tell a lie" when asked if he chopped down a cherry tree. I lao loved Abraham Lincoln's birthday on February 12th. That too was a federal holiday which meant a day off from school. Today, those two days got lumped into one which we now call Presidents Day, a federal holiday. I don't like it. I wish we still honored those two presidents individually with two days off in February instead of one. How do you feel about it? 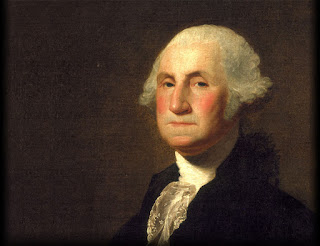 In old Hollywood, Ray Bolger did a dance number with George Washington and Abraham Lincoln. 1952's APRIL IN PARIS, a Warner Bros. musical co-starring Doris Day, had Bolger as a Washington, DC government office worker who will, of course, fall in love with the Doris Day character. Before that, however, he had time to swing out with the presidents.

Fred Astaire saluted Washington's Birthday with the "I Can't Tell a Lie" number in 1942's HOLIDAY INN, a Paramount musical full of old and new songs by Irving Berlin. Here's Astaire with Marjorie Reynolds. This is one of my favorite Fred Astaire dance numbers.

I hope you enjoyed this Washington's Birthday dance break. I wish we had the day off.