Hit the Road with THE INDEPENDENTS

This new indie feature is a musical drama with many moments of levity. It's called THE INDEPENDENTS and it's a charmer, a well-written and well-played winner. It's musical but not a big production Oscar-nominated musical like DREAMGIRLS, CHICAGO, MOULIN ROUGE! or LES MISERABLES. It's a scaled down musical like HEDWIG AND THE ANGRY INCH and the wonderful ONCE. THE INDEPENDENTS, written and directed by actor Greg Naughton, boasts about a dozen songs presented in a realistic way -- like while recording demo tapes or singing in clubs. This is basically a road movie and like most good road movies from the 1941 Preston Sturges classic, SULLIVAN'S TRAVELS to the Martin Brest 1988 comedy/action caper, MIDNIGHT RUN, road movies show that often the best friends you could ever hope to find are those you meet on your journey. THE INDEPENDENTS is no exception. 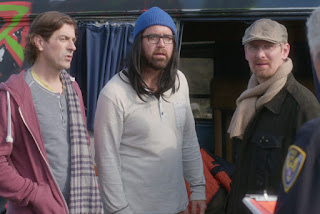 Rich is in his modest New York City apartment, half naked, playing his guitar and singing a song he's written. It's a gentle, James Taylor-esque song. Nonetheless, the old lady pounds on the floor upstairs for him to stop. Rich is an English professor at a local college. That's his day job. But his heart is really in music. His mother calls to remind him "You're not a kid anymore." She doesn't support his musical dreams and firmly reminds him that he's close to getting his doctorate. Rich meets Greg, a sad-eyed and friendly neighbor who's heard and totally digs Rich's music that he hears coming out of his apartment. Greg is a musician too. He's invited into Rich's apartment. They play music together. They blend and instantly bond. Rich gets a booking to play at an Ohio folk music festival one weekend. It turns out that Greg wants to drive out to Ohio to see his estranged girlfriend. They hit the road in Greg's van. Greg says "Guys like us, we don't stop making music." Along the way, they pick up a long-haired, tight-lipped hitchhiker. At first, they're understandably nervous and regret their good deed. However, Brian the hitchhiker turns out to be a musician too and he likes their music. The three bond. All three want to head to the Ohio music festival with their good 3-part harmony. Brian reveals "I just gave up making friends and wound up playing the guitar." They seem to be driven by the hope that you're never too old to make your dreams come true.

Of course, their are emotional bumps along the way and an offer to play a set at a club in Los Angeles. The bumps are so major that Rich wonders if should've stayed in New York and just give in to being an English professor. All three musicians have some heartbreak they'd like to see in the rear view mirror get smaller and smaller as they go forward. Here's a trailer. 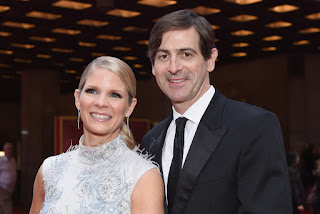 There's a sweet little tenderness to this musical. Some of us will be able to relate to the 3 musicians'
heartaches and disappointments. I know I did. The films runs 1 hour and 35 minutes. THE INDEPENDENTS opens February 26th. 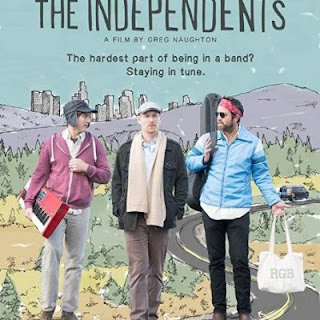