Millions of Netflix viewers were dazzled by BRIDGERTON, the scandalous and sophisticated new TV series from successful executive producer, Shonda Rhimes (GREY'S ANATOMY, SCANDAL and HOW TO GET AWAY WITH MURDER). The Netflix series takes place in the horse-and-carriage days of London. I watched the first two episodes of the 8-episode Season 1. Well, I too was dazzled. From the opening narration by Julie Andrews, to the saucy scripts, the sets, the racially diverse cast and the costumes. BRIDGERTON is big fun.

The first episode, as the voice of Julie Andrews tells us, is about the "upcoming social season." This is like an American debutante ball with the purpose of attracting a future husband with a good standing in society. The eight Bridgerton girls are placed on display like prized cows at auction. As the girls prepare for a presentation, one bellows out to her sister "Daphne, you must make haste!" Daphne is an independent spirit. She's poised and proper, yet not above punching out some society lout who tries to grope her. When she's presented to the Queen, the Queen remarks "Flawless, my dear." That compliment gets Daphne in London's top gossip column and makes her the "It" girl of eager suitors. None really interests her. But, there's the handsome Duke of Hastings, a seeming ne'er do well named Simon Bassett. He's got some history. He's also got some looks. He's played by the extremely handsome, sexy and talented Regé-Jean Page. He and Daphne will bicker and bond.

The popularity Regé-Jean Page has acquired from BRIDGERTON has been a boost to his career. His name is now being tossed around to be the new James Bond. On February 20th, he'll be the guest host on SATURDAY NIGHT LIVE.
Phoebe Dynevor is perfectly cast as Daphne, the young lady who wants to find love on her own terms. If you're a fan of classic films, notice that in hair and costumes. Dynevor is styled like Audrey Hepburn in Hollywood's 1956 version of WAR AND PEACE. 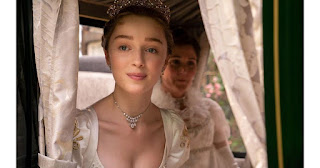 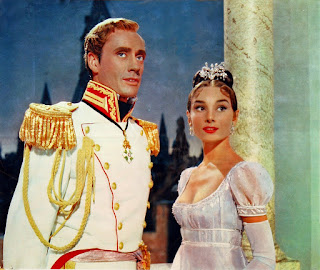 BRIDGERTON is based on novels by Julia Quinn, One knockout performance comes from the openly gay, Black actress Golda Rosheuvel. As the Queen, she can steal a scene with just the arch of an eyebrow. She is sensational. 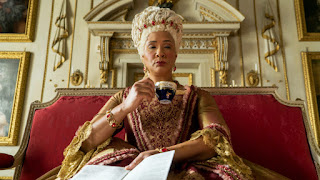 Episode 2 is more serious and strong. One Black titled character engages in discrimination based on social status and physical challenge. I will definitely be watching more episodes.