On JUDAS AND THE BLACK MESSIAH

Lord, what a bold and muscular movie. I am so glad it's being released during this Black History Month. There is Black history and Black tragedy in this late 1960s story that takes us to the life and assassination of community activist and Illinois Black Panther Party chairman, Fred Hampton. He was shot and killed in 1969 at age 21 on Chicago's West Side. This was the same decade in which Black civil rights activists Medgar Evers, Malcolm X and Dr. Martin Luther King were also shot and killed. The film is JUDAS AND THE BLACK MESSIAH, directed with a strong 1970s style by Shaka King. London-born actor Daniel Kaluuya is the British son of Ugandan parents. He was a Best Actor Oscar nominee for the 2017 horror film from Jordan Peele, GET OUT. I was absolutely amazed at the performance from Daniel Kaluuya as Fred Hampton. It's a thing of power and beauty. 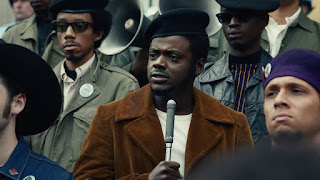 In a way, JUDAS AND THE BLACK MESSIAH, could be a companion piece to GET OUT. In the Jordan Peele socio/horror film, Kaluuya plays the young man determined to hold on to his Blackness and not have it stolen and overpowered by White America. LaKeith Stanfield played the Black man obviously bewitched by White society and favoring it over Black identity and Black bonding. That is, until the flash of a camera pointed at him breaks the spell. Daniel Kaluuya and LaKeith Stanfield are the two main figures in JUDAS AND THE BLACK MESSIAH. Kaluuya, as I mentioned, plays Black Panther chairman Fred Hampton, a man who became a strong, powerful voice of change in Chicago's Black community. LaKeith Stanfield plays Bill O'Neal, the Black FBI informant who worked with White FBI agents and helped bring about the assassination of Hampton. The real O'Neal is seen in TV documentary interview footage at the beginning of the movie. 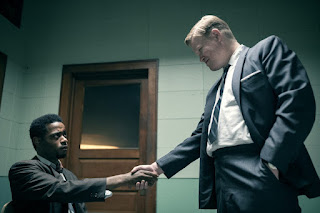 You almost ache at the unignorable relevance this film about a 1960s incident has to our modern times in America -- especially the times we endured with previous White House administration. It's very much a "Black Lives Matter" story. The Black Panthers want to get meals to underprivileged Black children in homes that can't always afford three meals a day. The organization is demonized by White political factions. Unarmed Black men are shot multiple times and killed by police. This look at 20th century history is a reflection of our current 21st century racial history.
Director Shaka King delivers a memorable film that's not always easy to watch. The final shoot-out with Chicago cops opening relentless gunfire on the building in which Fred Hampton lies in bed unarmed and the aftermath of the shoot-out made me gasp. Also in the building with Hampton was his very pregnant girlfriend. And there's the real-life FBI informant/Judas seen in documentary interview footage at the beginning and the end. LaKeith Stanfield hits the right tone as the man at emotional odds with his own Blackness. The excellent Jesse Plemons (OTHER PEOPLE and THE POST) stars as the FBI agent who bewitches O'Neal into betraying one of his own kind. If JUDAS AND THE BLACK MESSIAH brings Daniel Kaluuya another Oscar nomination for Best Actor, I will not be surprised.
JUDAS AND THE BLACK MESSIAH opens February 12th/