It's the first day of Black History Month and I've got some history about one of my favorite actors for you. He's the late, great Ossie Davis.  How I loved and appreciated his work in fine films such as Sidney Lumet's THE HILL (1965) and Otto Preminger's THE CARDINAL (1963). In that film, I was thrilled to see a representation of myself. I saw Preminger's movie when I was a kid -- a Black Catholic kid growing up in South Central Los Angeles. I saw Black priests in Sunday masses at church, but I never saw any on TV or in movies. Ossie Davis played a Black Catholic priest in THE CARDINAL.

I'm sure that millions of serious film lovers know him from the classic 1989 Spike Lee production, DO THE RIGHT THING. The Ossie Davis show biz history goes way back. In fact, he was not just an actor. He was also a director (1970's COTTON COMES TO HARLEM and 1973's GORDON'S WAR), a screenwriter and a playwright. His name was not included in the credits, but we see Ossie Davis play a relative to the Sidney Poitier hospital doctor character in the 20th Century Fox race drama, NO WAY OUT, a 1950 feature starring Poitier and Richard Widmark. With Ossie Davis in that drama, we see Ruby Dee. Ruby Dee was his wife and frequent acting partner. When Sidney Poitier finished his original cast run in the lead role of Lorraine Hansberry's groundbreaking Broadway play, 1959's A RAISIN IN THE SUN, also starring Ruby Dee, Ossie Davis succeeded him in the part. 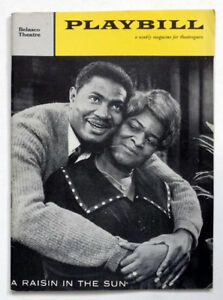 Davis wrote a Broadway comedy, a comment on the Civil Rights movement and what is was fighting for in the early 1960s. He starred in his play and his co-star leading lady was Ruby Dee. Ossie Davis played the robust, subversive and sexy preacher named PURLIE VICTORIOUS. The 1961 play was adapted into a 1963 film with most of the original Broadway cast recreating their roles.

The majority of film and TV roles that Ruby Dee got were dramatic. In PURLIE VICTORIOUS, we got to see her comedy skills -- and they were delicious. There's a touch of Judy Holliday whimsy in her portrayal of the sweet, guileless and lovable Lutiebelle Gussie Mae Jenkins. Lutiebelle catches the eye of Reverend Purlie when he returns to his hometown in Georgia.  Here's a photo of the Broadway cast getting a backstage visit from a real Civil Rights activist preacher -- Dr. Martin Luther King, Jr. In the back on the right side wearing black eye make-up is cast member Alan Alda. 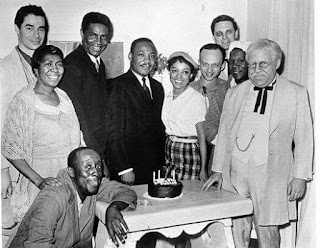 I first saw the 1963 comedy film on local Channel 9 in Los Angeles. Back then, the station's call letters were KHJ-TV. Channel 9 had a Friday night movie show that highlighted independent and foreign films. One night it showed GONE ARE THE DAYS!, the alternate title for PURLIE VICTORIOUS. My dad was a brawny World war 2 veteran, a somewhat reserved man who was nowhere near as loquacious and animated as Mom. Dad watched GONE ARE THE DAYS! and howled with laughter so hard at the Godfrey Cambridge performance that tears rolled down his cheeks. I love that memory.

Why GONE ARE THE DAYS! aka PURLIE VICTORIOUS has not been rediscovered, I have no idea. It stars two of the several Black actresses who got one Oscar nomination but should've received more. If only Hollywood had more good script opportunities for Black actresses after they received an Oscar nomination. In this Ossie Davis comedy, the two actresses are Ruby Dee (Best Supporting Actress Oscar nominee for 2007's AMERICAN GANGSTER) and Beah Richards (Best Supporting Actress Oscar nominee for 1967's GUESS WHO'S COMING TO DINNER).

To see GONE ARE THE DAYS!, the Ossie Davis work that broke my dad up with laughter, click onto this YouTube link: 👇