I was on Twitter today and saw that someone had posted a photo from 1972's THE GODFATHER. In the photo was Mama Corleone. 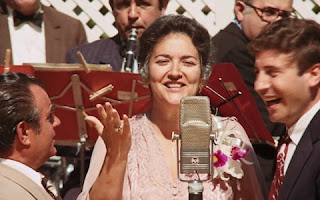 A popular singer had an acting role in the movie. He was Al Martino. He played Johnny Fontane. Back in the early 70s, radio was a top source of entertainment. Singers got plenty of airplay and Martino was one of those singers. Did you ever see the 1964 Bette Davis and Olivia de Havilland thriller called HUSH...HUSH, SWEET CHARLOTTE? In those closing credits, Martino sings the title tune.

Then was another singer in THE GODFATHER. A sensational jazz singer. My parents had her records and I grew up listening to her sublime vocals. The singer was the late Morgana King. She played Mama Corleone. To give your ears a treat, here's one of the album cuts I heard many times in our house when I was a kid. Morgana King sings the theme to another movie -- 1961's A TASTE OF HONEY.