Lord, have mercy. What a riveting, excellent film. Another remarkable accomplishment from filmmaker Spike Lee. Currently on Netflix, DA 5 BLOODS focuses on four Black veterans of the Vietnam war who reunite in Vietnam to find the remains of their squad leader and to find a large suitcase full of buried gold bricks. The late squad leader is the fifth blood brother. That's the plot on the surface. The foundation of DA 5 BLOODS is a tale of love. The story is built on the love of those five African American men for each other regardless of their differences and how the years have changed them. They reunite at what had once been the site of military chaos and political turbulence. Now it's a deluxe hotel. 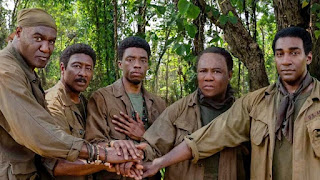 "After you've been in a war, you understand it never really ends," one character says. We'll see the reality of this as the search for the gold puts the veterans back in a war again in Vietnam. There's a touch of Huston's THE TREASURE OF THE SIERRA MADRE (1948) with the Delroy Lindo character, a hard-edged, self-described "broken man" who voted for Trump and wears a red MAGA cap, as a modern-day Fred C. Dobbs as played by Humphrey Bogart. Let me say this right now -- if Delroy Lindo does not get a Best Actor Oscar nomination for DA 5 BLOODS. the Hollywood Academy has lost its damn mind. It's another memorable performance from Lindo. I felt he should've been a Best Supporting Actor Oscar nominee for 1999's THE CIDER HOUSE RULES. But, Michael Caine was also excellent in it and he was nominated in that category. Caine had won the Best Supporting Actor Oscar for Woody Allen's HANNAH AND HER SISTERS (1986). However, he was not present at the awards because he was on location shooting what turned to be a major bomb of a movie. He's a beloved figure in Hollywood. He was present to accept his Oscar for THE CIDER HOUSE RULES and was moved to tears at the standing ovation he received. Caine was the sentimental favorite.

Lindo's "broken man" is fascinating to watch. He's a mixture of strength and fragility, an intimidating figure whose locked in emotions have frayed his relationship with his loving, grown son, The son journeys to Vietnam to see that his father is okay. He will see that his father's lust for the gold is -- to use a line from 1957's THE BRIDGE ON THE RIVER KWAI that is used in DA 5 BLOODS -- "Madness. Madness." His father and his father's friend has survived a controversial war, a war that Dr. Martin Luther King Jr criticized in an April 4th, 1967 sermon at Riverside Church in New York City. Many African American men were drafted into a war they didn't believe in and drafted to fight for their country at a time when Black Americans were still fighting for their civil rights.

DA 5 BLOODS stars Delroy Lindo, Clarke Peters, Isiah Whitlock Jr, Broadway's Norm Lewis and the late Chadwick Boseman as the 5 blood brothers. Boseman stars as the squad leader killed in battle and is seen in flashbacks. Jonathan Majors, seen in the HBO series LOVECRAFT COUNTRY, stars as the son. Majors has arms that look like they were sculpted by Da Vinci. 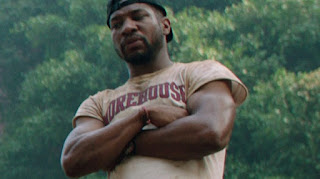 DA 5 BLOODS runs 2 hours and 35 minutes. I did not feel long to me. There's plenty of emotional and physical action. Spike Lee delivered one of the best films of 2020.