Roger Ailes, the head of conservative and controversial Fox News, made headlines himself this summer when he was sued for fired for sexual harassment. More than one female employee accused him of sexual harassment and filed suit.  Said former Fox News host Andrea Tantaros:  "Fox News masquerades as a defender of family values but operates like a sex-fueled, Playboy Mansion-like cult." 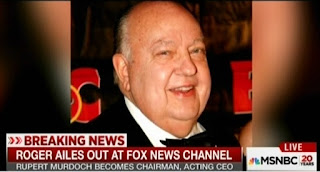 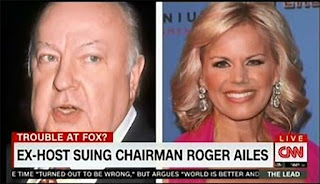 Wow.  Did you ever notice that Fox News had something in common with the 20th Century Fox studio back in the classic Hollywood era?  Like Warner Brothers was known for "Murderers' Row," its top-notch gangster movie stars such as James Cagney, Humphrey Bogart and Edward G. Robinson, 20th Century Fox was famous for its Fox Blondes.   From the 1930 through the 1950s, the studio showcased blonde stars such as Alice Faye, skater Sonja Henie, Betty Grable and its superstar sex symbol of the 1950s, Marilyn Monroe. 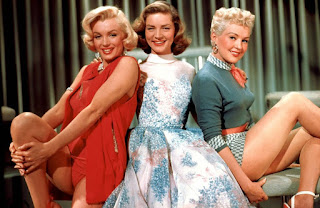 Fox News seemed to carry on that Hollywood tradition, if you will, with its share of Fox Blondes giving us the news. 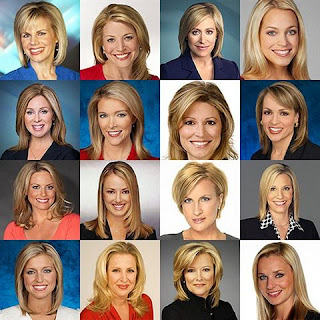 Here's my note on the Roger Ailes business and how it relates to gender/race diversity and respect:  I have a hunch that Roger Ailes, who made millions as head of Fox News, had a white male agent who not only was aware of his client's sexual misconduct but also submitted female talent to him for employment consideration -- the kind of female talent that appealed to the Fox News camera, the company's attitude and to Roger's hormones.  Roger and his agent were probably drinking buddies.  Between Ailes and his agent, there was probably an old Caucasian Boys' Club camaraderie.  It was a club that had its exclusions.  My point is, the problem is not just with the executives and perhaps the on-air males who may have also acted irresponsibly, it stretches to and includes the men who  represent them and make them rich.  The world of high-powered broadcast TV agents appears to be predominantly white and male.

I repeat -- it's just a hunch and just my opinion.

Since January of this year, I've been eagerly waiting to see THE BIRTH OF A NATION.  This race drama set during the days of slavery in America electrified film festival audiences and caused major buzz -- the kind that results in Oscar nominations.  It's a Fox Searchlight release.  This story of a slave revolt was written and directed by Nate Parker.  The new independent filmmaker also stars in the film. 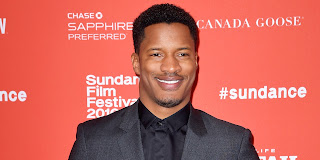 Recently, news broke that the filmmaker was charged with sexual assault in his college years at Penn State.  Parker was acquitted of the 1999 incident.  Parker learned this month that the accuser had committed suicide in 2012.  This is a messy, complicated situation. So much so that the AFI (American Film Institute) has cancelled its scheduled special screening of the film for later this week.  The question & answer session with the filmmaker after the screening has also been cancelled.  VARIETY reported the resurfacing of sexual assault allegations as the result of the cancellation.  Nate Parker has responded to all this.  He's now a married man with children. He said about the news of this court case, "I was sure it would come up.  I was cleared of everything, of all charges."   He maintains that the sex was consensual.

According to The Los Angeles Times, "There is no proof that Jane Doe took her life because of the events that took place at Penn State..."  Parker maintains his innocence and posted a Facebook statement of sorrow upon hearing of her suicide.  Hollywood waits to see if all this will freeze the hot Oscar buzz for his film which is due to open in early October.

On today's date in 2003, top Hollywood action movie star Arnold Schwarzenegger announced his plans to follow in the footsteps of Ronald Reagan. He'd be a Hollywood actor tossing his Republic hat in the ring to be Governor of California.

That brings us to NBC.  Two members of the Bush Family, the family that gave us two U.S. presidents, are now on the TODAY Show on-air news team -- even though they both came to NBC without any prior TV experience or journalism background.  Jenna Bush Hager has been a TODAY contributor for a couple of years now.  Billy Bush was hired by local WNBC in New York City.  He did lifestyle features and went network within six months.  His first network exposure was in segments for TODAY.  Then came ACCESS HOLLYWOOD host duties.  Now he's on TODAY full time.  NBC News loves the Republican Bush Family.

Schwarzengger was married to Democrat Maria Shriver, a journalist for NBC News.  When there was buzz that he'd be running for Governor of California, news outlets like Yahoo news were alerted that he'd probably make the announcement at a scheduled press conference.  But, at the last minute, the press conference was cancelled leaving some journalists to speculate he would not be running after all.  Wrong.

Arnold made the announcement that he was running.  He made it on this date in 2003 -- on NBC's TONIGHT Show hosted by Jay Leno. 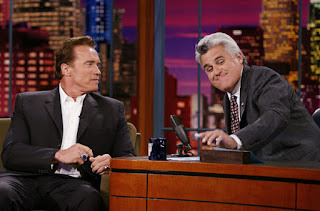 Schwarzenegger ran on the Republican ticket, won and was Governor of California.  He and the Catholic Maria Shriver separated in 2011.  They married in 1986.  The year of their separation was the same year Arnold publicly admitted to fathering a child with a longtime member of their household domestic staff before he was elected Governor.  He'd kept the child a secret from Maria.

Nevertheless, he's still got the right stuff to be the newest member of the NBC prime time talent pool. He replaces Donald Trump (now the Republican presidential contender) as host of the reality game show, THE APPRENTICE.
Keep in mind that, back in 2001, The New York Times reported NBC would be acquiring Telemundo, the nation's second-largest Spanish language broadcaster, for nearly $2 billion.  Trump's comments about Mexican immigrants could've hurt NBC right in the pocketbook. Millions of Latino/Hispanic TV viewers in the U.S. were angered by what he said.

Even Paddy Chayefsky could not have made all this stuff up in an original screenplay to follow his 1976 script, NETWORK.