For classic film fans, here's a new Meryl Streep movie to add to the Irene Dunne comedy phase of her screen career.  I will explain later.  Back in the 1990s, Meryl Streep mentioned Marlon Brando as a great influence on her acting.  She singled out his performance as Marc Antony in 1953's JULIUS CAESAR.  In the same article, she mentioned Lucille Ball.  You can see touches of Ball as Lucy Ricardo in Streep's performance as the singing socialite FLORENCE FOSTER JENKINS. Meryl Streep is quite warm and delightfully loopy in this film lobbing off lines like "He's raping my ears!" as a pompous pianist plays with too much gusto.  Ironically, dear Florence has no idea that she too rapes ears with her off-key musical output. 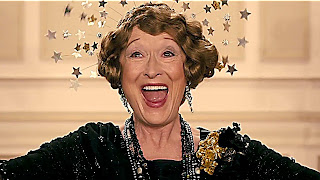 Streep's characterization has a touch of Lucy Ricardo in I LOVE LUCY.  She's outfitted like Margaret Dumont in a 1930s comedy with Groucho Marx.  Her character has elements of the kind of woman who would have been played by the famed monologist Ruth Draper. 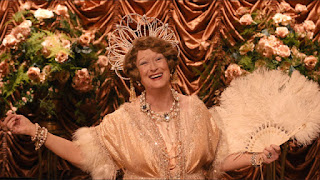 Meryl Streep can sing and sing well.  She sang "Amazing Grace" in SILKWOOD.  She sang "He's My Pal" in IRONWEED.  She sang the new tune "I'm Checkin' Out" to a Best Song Oscar nomination on POSTCARDS FROM THE EDGE.  By the way, all three films brought Streep Oscar nominations for Best Actress.  She sang in MAMMA MIA!  That 2008 film version of the Broadway musical comedy hit did not bring Streep an Oscar nomination but it was huge box office hit here in the States and overseas.  Streep can be funny and sing -- as she did in one of my guilty pleasure favorite films of hers.  In the open of DEATH BECOMES HER, Streep breaks me up in her number as the bitchy Hollywood movie star diva.  She's on Broadway in a wretched musical version of Tennessee Williams' SWEET BIRD OF YOUTH. 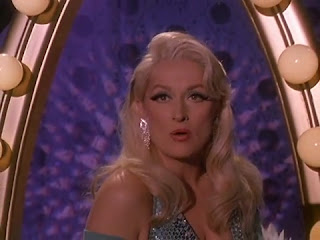 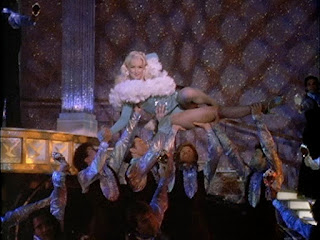 Back in the late 1980s, Meryl Streep mentioned in a newspaper article that she was interested in doing a film version on Broadway hit, EVITA.  But Hollywood decided to go with a non-actress instead.

Many years ago, I first heard of Florence Foster Jenkins when someone was talking about Mrs. Miller, a popular and frequent novelty act guest on the Merv Griffin syndicated talk show.  She was not as off-key as Jenkins but she did make one think of those Margaret Dumont characters Groucho Marx constantly teased.  And Mrs. Miller recorded albums. 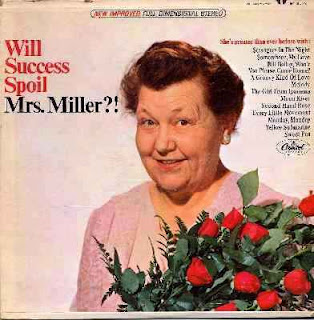 FLORENCE FOSTER JENKINS was directed by Stephen Frears.  His credits include THE GRIFTERS with Anjelica Huston, THE QUEEN starring Helen Mirren and PHILOMENA starring Judi Dench and Steve Coogan -- films that are refreshing to see when you look at today's current slate of cineplex fare.  They're films with juicy roles for middle-aged or senior actresses, films driven by dialogue and relationships -- not by CGI special effects and young, shapely comic book superheroes.  When we first see Florence, she makes an onstage entrance similar to something we would have seen in a classic Chuck Jones cartoon for Warner Brothers.  She strikes the moviegoer as being a ditzy socialite.  True, she does have her clueless moments but she truly, deeply cares about the arts.  She is passionate about classical music.  She gives financial support.  She's such a passionate and financially endowed fan that classical music greats such as conductor Arturo Toscanini can drop by unannounced. Ultimately to ask for some financial support.  Florence may seem ditzy but she knows that her money, as a modern urban song states, is the milkshake that "brings all the boys to the yard."  Her protector, publicist, manager and the main man in her life is her devoted husband, a British charmer and self-admitted second-rate actor named St. Clair Bayfield.  Hugh Grant hits just the right note in this role.  It's an odd relationship.  Yes, he does love her and he's obviously devoted to keeping bad reviews out of her sight.  He has a mistress.  But Florence always remains his top priority over the sexy young mistress. Florence hits sour notes onstage.  She has harmony in her non-traditional marriage. 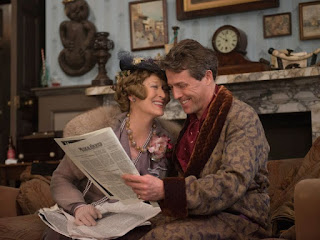 Around the time of his hits like 1999's NOTTING HILL with Julia Roberts, I heard Grant frequently called "The new Cary Grant" by entertainment reporters.  I think that's because he's dapper, had a British accent and got the girl at the end of the picture.  If you really look at his amusing characters, I feel he was more like a David Niven.  Look at Niven as the lovable cad in William Wyler's DODSWORTH, in the comedy BACHELOR MOTHER co-starring Ginger Rogers, THE BISHOP'S WIFE co-starring Loretta Young and Cary Grant, and PLEASE DON'T EAT THE DAISIES co-starring Doris Day.  Grant gives life and sweetness to this film version of the singer's husband.  You do wonder if, in real life, it was a marriage of sexual convenience and he was gay at a time when one couldn't be openly gay.  I'm sure the answer is available to be researched.  Florence needs a pianist for her recital.  True, she can't sing but she's hiring and she's got money.  That's why it's called show business.  She likes the unassuming and overwhelmed Cosme McMoon played by Simon Helberg, star of the long-running CBS sitcom, THE BIG BANG THEORY.  Florence likes Cosme.  St. Clair hires Cosme. 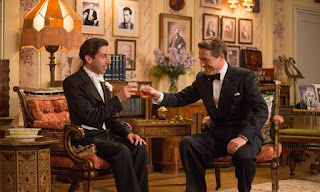 Shy, talented Cosme has long dreamed of playing Carnegie Hall.  He just never dreamed of playing piano for someone who sounds like Florence Foster Jenkins.  Fear seems to be crouching behind his constant smile.  He walks as if his neck and torso have been starched.  Here's a trailer.
We love St. Clair because he loves Florence.  We love Florence because she loves the fine arts.  "Music matters," she says.  Although she can't sing, she gives her all to perform for our soldiers in World War 2.  She is determined to entertain men fighting for our freedom and liberty.  She's not selfish.  Florence is not like young contestants on reality TV competition show, talented contestants who hunger for instant celebrity status.  Microwave stardom.  They want to be stars for the Red Carpet experience.  Florence wants the spotlight to distinguish herself and help others. She will give money the keep the classical music arts going.  Her ultimate dream is to be a part of the entertainment world that enriched her life and often healed her broken heart.  Who hasn't had a dream like that?  I did.  I have.   I was touched and enlightened by TV and film.  I wanted to contribute to it, be a part of it.  Like Florence, I've occasionally wondered if I really had talent or if I was just a novelty to some people. 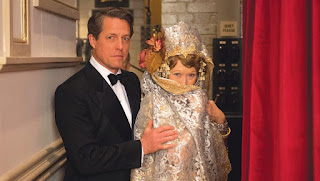 St. Clair sees Florence as she really is.  To Cosme, she reveals the heartbreaks of her life.  And there were big heartbreaks.  I have been a Meryl Streep fan for decades, going back to her performance in the 1978 NBC mini-series HOLOCAUST about a Jewish family's struggle to survive the horrors of Nazi Germany.  Meryl's acting skills in her early film career coupled with her brilliance at foreign accents dazzled us.  Look at SOPHIE'S CHOICE, OUT OF AFRICA, THE FRENCH LIEUTENANT'S WOMAN and A CRY IN THE DARK (the "A Dingo Ate My Baby" movie).  We were so dazzled by her acting perfection and technique that often we didn't get fully absorbed into her characters the way we did, say, Bette Davis in NOW, VOYAGER and ALL ABOUT EVE, Barbara Stanwyck in STELLA DALLAS, THE LADY EVE and DOUBLE INDEMNITY, Anne Bancroft in THE GRADUATE, Shirley MacLaine in THE APARTMENT and TERMS OF ENDEARMENT or Whoopi Goldberg in THE COLOR PURPLE .  Meryl's mountaintop dramatic talents made her remote, in a way.  Too far above us.  Like Irene Dunne in the 1930s, Streep's early film career was a steady diet of dramas.  Dunne was dramatic in CIMARRON, BACK STREET, THE SILVER CORD, THE AGE OF INNOCENCE and MAGNIFICENT OBSESSION.  A noted signer, Irene Dunne sang in the 1936 musical drama SHOW BOAT.  Then came the 1936 screwball comedy, THEODORA GOES WILD.  Apparently, moviegoers went wild for Irene Dunne being funny and a fashion plate -- and giving them a song on the side.  They loved the newer, warmer Irene Dunne. She scored again thanks to the screwball comedy classic with Cary Grant, 1937's THE AWFUL TRUTH. Dunne proved to be a top screen comedienne.

I feel that Meryl Streep made a similar and calculated Irene Dunne-like turn when she made SHE-DEVIL in 1999 to break up the dramas.  She needed to play kitchen-sink women.  She needed to play someone who seemed accessible and of common clay.  She needed to make us laugh.  Then came her comedies POSTCARDS FROM THE EDGE (1990), DEFENDING YOUR LIFE (1991) and DEATH BECOMES HER (1992).  In two of those, she sings.  She's at her funniest while singing in FLORENCE FOSTER JENKINS. 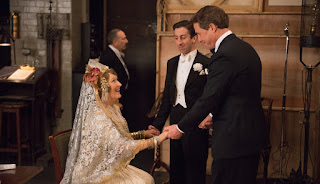 She's at her warmest and most vulnerable in scenes with Hugh Grant.  Like the scene with Florence and St. Clair seated in theater seats when the theater is empty. Streep put a few tears in my eyes with this scene. 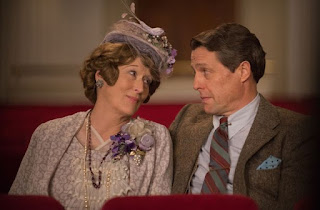 Is this a great movie?  Not compared to those other Stephen Frears films that I mentioned.  But FLORENCE FOSTER JENKINS is a very entertaining film with a surprising poignancy, solid and touching work from Meryl Streep and a stand-out performance from Hugh Grant.  To me, it's like a very good made-for-TV movie that's fun to see because...well, there's probably a little bit of Florence Foster Jenkins in many of us.