The Sweetness of FORREST GUMP

Last weekend on CBS SUNDAY MORNING, there was a fine feature to honor Veterans Day. In the feature, two actors were interviewed. First, there was Gary Sinise. He played Lieutenant Dan, the amputee and Vietnam War vet, in 1994's FORREST GUMP starring Tom Hanks and Sally Field. Sinise got a Best Supporting Actor Oscar nomination for his performance. The actor never served but many of his relatives did and, for years, he has tirelessly devoted himself to volunteer work on behalf of veterans. The other person interviewed is a veteran. He served in one of our 21st Century conflicts. He'd like to act again. He acted with Sally Field when he was a kid. He played little Forrest Gump, the boy with the Southern accent who was told to "Run, Forrest! Run!" Michael Conner Humphreys served in Iraq. He's now 34. Hanks studied Humphrey's accent to use in his performance as the grown Gump. 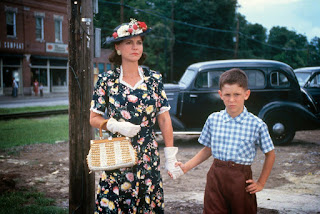 This post is about set decoration and art design in the movie. 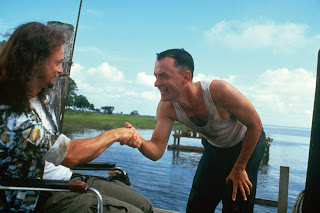 I'm a longtime fan of Tom Hanks. I have been since his ABC TV days in drag on the sitcom, BOSOM BUDDIES back in the early 80s. I'd read the Winston Groom novel, FORREST GUMP, within a weekend. Politically incorrect? Yes, it is. A bit rude and racy? It's that too. And damn funny. FORREST GUMP, the 1986 novel, is like something Mark Twain would've written if he'd smoked pot instead of cigars. Before the movie opened, there was hot buzz on it. A publicist for a rival film company gave me this tip: "If you get invited to a screening of FORREST GUMP, go. It's really good."

Well, I did want to see it because of Tom Hanks. I especially wanted to see how Hanks would pull off being a big musclehunk idiot savant who was terrific on the football field and once said, "Bein' an idiot is no box o' chocolates." Could Hanks pull off playing a John Cena-type? Had he lifted weights to prepare for the role? 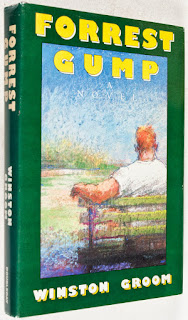 Forrest had a selfish and whiny mother and a girlfriend who did not limit her generous sexual favors to just him. His many misadventures in life ranged from the sports field to outer space to making a sci-fi movie with a cranky Raquel Welch. The characters played by Sally Field and Robin Wright -- and even Mr. Hanks himself -- in the Robert Zemeckis film had been sweetened from the original source material.

For the film version, screenwriter Eric Roth removed the book's apple vinegar tartness and replaced it with four cups of sugar. Forrest Gump on film was not the big beefcake idiot savant of the novel. His famous quote in the novel was changed for the screenplay to "Life is like a box chocolates...."

You know the rest.

Part of this clip was played in the CBS SUNDAY MORNING piece. I noticed something in the scene I'd never noticed before when I watched the movie.

Watch the clip again. Forrest says that now-famous movie line. Doesn't it look like he and the lady on the bench are seated on top of a giant Hershey bar? That whole "box of chocolates" philosophy is reflected in the set decoration. I had never noticed that until last weekend on CBS SUNDAY MORNING.

The CBS SUNDAY MORNING feature, "How two FORREST GUMP actors served their country," can be seen if you look for it here  cbsnews.com.