On THE PEANUT BUTTER FALCON

Shia LaBeouf. His name sounds like a beef tenderloin special on an L.A. restaurant dinner menu. You know that he's not an entree. He's an actor. A good actor who's been at it for quite some time. I remember seeing him in an episode of  THE X-FILES back in late 90s. I'm fond of his performance in 2005's THE GREATEST GAME EVER PLAYED. Beautifully directed by the late Bill Paxton and terribly marketed by Disney, you could tell that he was a young actor with serious talent. He went on to landing top roles in INDIANA JONES AND THE KINGDOM OF THE CRYSTAL SKULL starring Harrison Ford and 2010's WALL STREET: MONEY NEVER SLEEPS starring Michael Douglas. Back in 2014, he was acting afool and got busted for disorderly conduct and, later, for public drunkenness. He's 33 now and seems to have pulled himself back together. Hopefully. I like him. He's got talent and it would be a shame to waste it. He did not waste one bit of his talent in THE PEANUT BUTTER FALCON. In fact, Shia LaBeouf delivers one of his most satisfying and sincere performances in it. 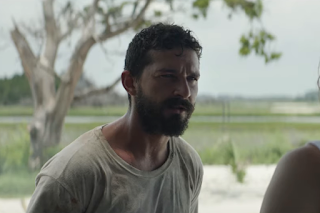 The indie film has an unusual title. There's a good reason for that title, as you'll learn when you see the movie. Basically, it's a road movie that puts two opposites together. In road movies, there will be a journey, self-discovery and a union of the two different types. The differences can be in race, class, personality types or physical/developmental abilities. Think of films such as RAIN MAN, SIDEWAYS, MIDNIGHT RUN, SCARECROW and GREEN BOOK. THE PEANUT BUTTER FALCON has two guys who are very different but wind up together travelling down a river and on land like they're the two main characters in Mark Twain's HUCKLEBERRY FINN. 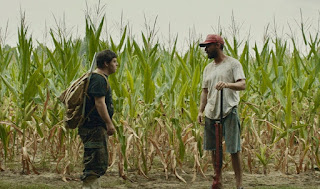 "Friends are the family you choose," says Carl. Carl is the senior gentleman who lives in the same residence with Zak. We can tell as soon as we see Zak in the opening scene that his unspoken motto must be "Y'all must be crazy if you think I'm crazy." He's in his early 20s and will readily profess in the story "I am a Down Syndrome person." He's a handful at the nursing residence. A couple of the older folks help him in his plan to escape. He escapes, gets caught and returned to the residence. In a room with Carl, he puts on his favorite VHS tape. It's a sports tape. Zak is fascinated with a pro wrestler called "The Salt Water Redneck." Zak wants to be a pro wrestler. 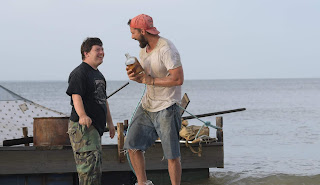 One more attempt, with some advice from Carl, proves successful. Zak flees the North Carolina nursing residence and hides out in a fishing boat. The boat is owned by Tyler (Shia LaBeouf), a lonely hard-luck dude who's on the run for some trouble he sparked with local rival fishermen. There's a chase on the water. Tyler discovers he's got a stowaway. Thus begins an adventure and an unlikely friendship. Yes, you've seen road movies with two guys before, but this one has a fresh ingredient that breathes new life into the format. The actor playing the smart, spunky, charismatic character with Down Syndrome is really a person with Down Syndrome. The actor's name is Zach Gottsagen and he's wonderful to watch. Both young men thrown together are, in their ways, fleeing. They form a bond. Along the way, there will be danger, laughs, religion, romance and wrestling. The two lead actors connect quite well. Zach Gottsagen is a breakthrough winner. Shia LaBeouf is at his mature best. Here's a trailer for THE PEANUT BUTTER FALCON.

If you like SIDEWAYS and THE STATION AGENT, I think you might like THE PEANUT BUTTER FALCON. Also in the cast are Bruce Dern, Thomas Haden Church, John Hawkes and Dakota Johnson. There's a nice warmth about this film written and directed by Michael Schwartz and Tyler Nilson. Carl was right -- "Friends are the family you choose."