On John Boyega in DETROIT

Can anyone doubt that STAR WARS: THE RISE OF SKYWALKER is destined for a super reception when it opens? Variety reports it could pull in $200 million during its December 20th weekend opening. This means millions of us STAR WARS fans will once again see British actor John Boyega as Finn. With him in the newest adventure will be Adam Driver, Daisy Ridley, Oscar Isaac and, of course Mark Hamill plus the late, great Carrie Fisher. We know the handsome, young John Boyega from his high profile STAR WARS work and his PACIFIC RIM job. Both film characters thrust him into the action adventure arena. 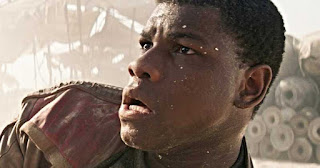 As I learned from my greatly-appreciated Twitter pal, Andres Quiroga, Mr. Boyega's skills should not be limited to action adventures. Andres, who has increased my cinema history knowledge, urged me to see the 2017 drama, DETROIT, directed by Oscar winner Kathryn Bigelow. Her film, inspired by national news reports about police shooting and killing unarmed black citizens, is based on the true-life incidents in the Detroit riots of 1967. 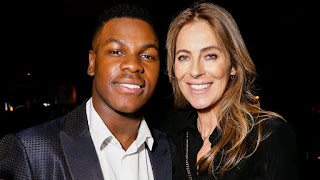 John Boyega has a key role as a black security officer in DETROIT. Boyega is amazing in DETROIT, delivering a performance that is not heavy on dialogue yet holds your attention as you watch his character think, react and deal with the racially hot situation. It's a performance of impressive internal force. John Boyega is so powerful in the dramatic role that you might find yourself wondering -- as I did -- if he was considered to play the young son opposite Denzel Washington's father/husband character in 2016's FENCES. Perhaps he was busy with STAR WARS production. 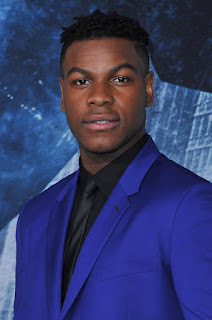 Bigelow deploys a classic horror film format to tell the story. There's a big house at night and we know that a monster is hiding in the house, endangering the people in it. In DETROIT, the monster is racism -- racism within the police force. Boyega's character is shocked to see what the monster is, yet he must carry out his duty to protect and serve.  The conflict -- he's not only of the color the monster hates, but he wears the same kind of uniform the monster does. Watch this trailer for DETROIT.


I remember when this film opened. I don't recall it getting much attention on entertainment news programs. Bigelow, with taking on the DETROIT story, gave attention and respect to the "Black Lives Matter" movement in national headlines. It's a strong film from a strong filmmaker.

Ms. Bigelow made history when she was the first woman to win the Oscar for Best Director. She won for THE HURT LOCKER and it also took the Oscar for Best Picture. Her win did not instantly level the gender playing field in that category in the same way the election of President Barack Obama did not make America instantly post-racial. Bigelow's 2012 drama, ZERO DARK THIRTY, got rave reviews. A few critics felt it was even better than 2009's THE HURT LOCKER. ZERO DARK THIRTY got Oscar nominations for Best Picture and Best Actress. Kathryn Bigelow did not get a second Oscar nomination for Best Director.

2009's AN EDUCATION: Oscar nominations for Best Picture and Best Actress. Nothing for Director Lone Scherfig

Along with Wertmüller and Bigelow, the other women to get Oscar nominations for Best Director are Jane Campion (1993's THE PIANO), Sofia Coppola (2003's LOST IN TRANSLATION) and Greta Gerwig (2017's LADY BIRD). No woman, so far, has ever received more than one Oscar nomination in the Best Director category.
at November 27, 2019