Director Martin Scorsese seems destined to be invited to the Oscars again as a nominee thanks to his new saga, THE IRISHMAN. It stars Robert De Niro, Al Pacino and Joe Pesci. The reviews have been like critics throwing roses at Scorsese's feet. All the reviews I read added that the film is so good and moves so energetically that you don't feel its 3 1/2 hour running time at all. I want to give you a Martin Scorsese-directed music break right now. Marty, which I've never called him, directed Best Actress Oscar winner Liza Minnelli in two musical projects. There was THE ACT which premiered on Broadway in 1977. THE ACT had a score by John Kander and Fred Ebb and costumes by Halston. Scorsese directed Liza Minnelli to a Best Actress Tony win for her performance as a fading film star making a comeback as a Las Vegas singer. 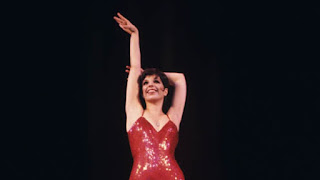 In her act, she recalls her chaotic romantic and professional life. 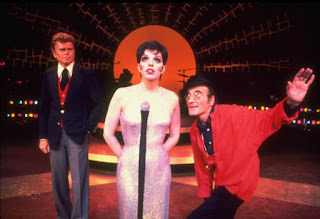 Here's Minnelli singing one of my favorite songs from the score -- the smooth "It's the Strangest Thing."

Liza Minnelli won her Oscar for 1972's CABARET directed by Bob Fosse. Her next big movie musical drama was 1977's NEW YORK, NEW YORK directed by Martin Scorsese with new songs by John Kander and Fred Ebb. Liza's leading man was Robert De Niro. As usual, when Scorsese had the film in the editing room to ready it for release, his motto was not "to make a long story short." I saw this movie the day it opened. I love Liza Minnelli. She'd never looked so glamorous before in a film. Her singing was in peak form. 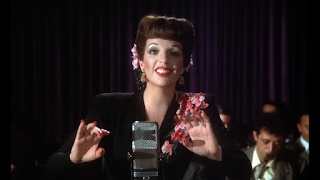 I have seen NEW YORK, NEW YORK several times since first it opened and I still feel that it could've worked very well coming in at 2 hours instead of its 2 hours and 30 minutes. 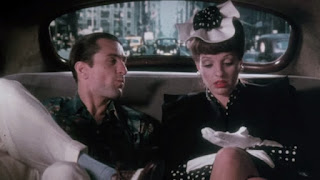 Also, with its central story of two talented performers in love yet in conflict because the man gets jealous of the woman's success, Scorsese didn't control the reins on the masculine anger. As you can guess, De Niro's character is the one with the anger issues. The U.S.A. is celebrating the end of World War 2. He's a sax player in need of work now. She's a classy vocalist. They work together. They fall in love. They get married. Then it becomes RAGING BULL STRIKES UP THE BAND AND SLAPS HIS WIFE LIKE SHE'S A BASS FIDDLE. Scorsese seemed out to give us the co-dependent, troubled romanticism of Michael Curtiz's MY DREAM IS YOURS starring Doris Day, Powell & Pressburger's THE RED SHOES and Cukor's 1954 remake of A STAR IS BORN with Judy Garland and James Mason -- all films with musical numbers. He could've succeeded. But De Niro's character cheats on his sweet wife, he has an explosive temper and he's physically abusive to her when she's about nine months pregnant. To me, Scorsese needed to pull back on those elements and the excessive ad libbing.

Nevertheless, I totally dig what Scorsese did with Liza's musical numbers. After singer Francine Evans (Minnelli) finally breaks away from her abusive marriage, she finds her own new voice as a woman and as a singer when she records "But The World Goes 'Round."

Francine is a hit on the Billboard charts as a solo vocalist. Soon, Hollywood calls and she transitions into movie star. Near the end of the story, Francine is doing a live engagement. It's the early 1950s and she's a star playing the swanky nightspot where she and her ex-husband first met in 1945. She introduces a song to the packed audience "New York, New York."

Both of those songs from Scorsese's NEW YORK, NEW YORK were eligible for an Oscar nomination. Neither song was nominated. The Oscar winner for Best Song of 1977 was "You Light Up My Life" from the forgettable movie of the same name.