It's a political drama and a story about race in America. The production was based on a best-selling novel by Irving Wallace. My dad had a paperback copy of the book at home when I was a kid. In the production, with a screenplay by Rod Serling, an elder statesman of a senator in 1970s Washington, DC speaks with casual and frank racism. He says "...the White House doesn't seem near white enough for me tonight." That is a line from the 1972 made-for-TV production, THE MAN, based on the novel of the same name and starring James Earl Jones as America's first black president. To me, James Earl Jones gave one of his most compelling performances in this 90-minute feature that aired on ABC TV. What a magnificent actor. After he'd dazzled Broadway audiences with his performance as the boxer in THE GREAT WHITE HOPE, he recreated his role in the 20th Century Fox film adaptation. 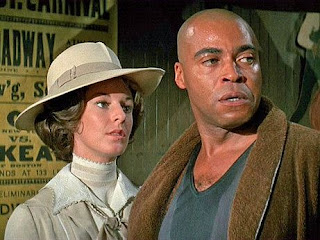 For that, Mr. Jones became to the second black man in history to be an Oscar nominee for Best Actor. The first was Sidney Poitier. In 1970's THE GREAT WHITE HOPE, Jones radiated in intense vibe of athletic and racial power. The boxer was his own man. Here's a clip.

The first black actor to be nominated for an Oscar was Hattie McDaniel in the Best Supporting Actress category for 1939's GONE WITH THE WIND. She won. From Hattie to Ethel Waters, Dorothy Dandridge and Rita Moreno to Diahann Carroll, Cicely Tyson, Rosie Perez and Angela Bassett to Halle Berry, Don Cheadle, Forest Whitaker and Jamie Foxx to Taraji P. Henson, Gabourey Sidibe and the late Ruby Dee -- those are all actors/actresses of color with one solo Oscar nomination to their credit. James Earl Jones is also on that list with one Oscar nomination.

James Earl Jones followed THE GREAT WHITE HOPE (1970) with ABC TV's network presentation of THE MAN (1972) and followed that with CLAUDINE (1974), the urban family life story that brought Diahann Carroll her Best Actress Oscar nomination. After CLAUDINE, from 1974 to 1976, most of his on-camera work was in TV performances.

When you see his performance in THE MAN, you may feel as I did -- that James Earl Jones should've been getting the same amount of good big screen opportunities in the 1970s that Gene Hackman and Jack Nicholson did after their first Oscar nominations.

THE MAN should have been a highly promoted big screen Paramount release. But Hollywood has long been cocooned in the notion that black stories don't sell. And THE MAN was a story in which an African American male becomes president, black newsmakers have meetings with him in the White House, there are black journalists in the press room and a member of the new First Family is a university graduate student in philosophy. The upscale, strong modern roles for black actors in THE MAN probably made many heads on white Hollywood movie executives explode like those on the evil Martians hearing Slim Whitman sing in MARS ATTACKS!

The late Janet MacLachlan played a schoolteacher in 1972's SOUNDER, a Depression-era story set down South about a poor black family. That same year, on network TV, she played the graduate school/activist daughter of America's first black president. Like her widower father who was a college professor in New Hampshire, she can hold her own in an intellectual debate.

With the current climate of the USA, aspects of this 1972 TV film will feel achingly relevant today. Remember how people thought the election of President Barack Obama meant that America had become instantly "post-racial"? Watch THE MAN. An accident claims the lives of the President and the Speaker of the House. Douglass Dilman (James Earl Jones) becomes next in line to assume the powers of the Commander-in-Chief. One white cabinet member is jealous. At home, he's verbally castrated by his racist Washington society wife. Then there's the senator who plans to "...strike a blow on behalf of White Supremacy." All the while, unassuming and erudite Douglass Dilman must steady himself under the heavy weight of his newly-placed crown. Jones translates the overwhelming weight of his new position with a tremble of Dilman's hand as he tries to pour himself a drink. It's a compact, effective, brilliant example of the actor's artistry. Dilman's daughter realizes his inner conflict. "I can't be what everyone wants me to be," he says.

James Earl Jones is surrounded by a group of top Hollywood veterans in the cast -- Burgess Meredith, Lew Ayres, Martin Balsam, William Windom and Barbara Rush. Comedian Jack Benny is in the opening scenes as host of the White House Correspondents' Dinner.

I saw THE MAN on TV when I was in high school and I was moved. I watched it recently. Again I say, "James Earl Jones. What a magnificent actor." If you want to see THE MAN, which runs 90 minutes, click onto this link: