I finally got around to seeing this hit film that was directed and written by Lorene Scafaria. First of all, when it ended, I thought "Bob Fosse would have loved this movie and he would've sent flowers and champagne with congratulations to the director." You probably know already that this is the film inspired by a post-Recession feature in a New York magazine about a group of group of strippers who scammed high income clients by beating them at their own game. The scam is not a whimsical plot hatched by greedy dames. A couple of them are down on their luck and trying to take care of a relative. They can't get by with just minimum wage jobs. About Bob Fosse. Did you see the firsr movie he directed, the film version of the Broadway musical SWEET CHARITY? The initial relationship between the two HUSTLERS played by Jennifer Lopez and Constance Wu.... 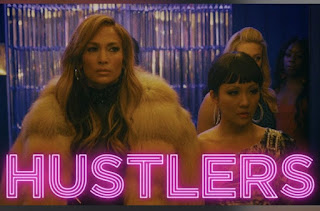 …is pretty similar to that between veteran taxi dancer Nickie, played by Chita Rivera (below, right), and Charity, played by Shirley MacLaine (middle). JLo is Nickie. Constance is Charity. 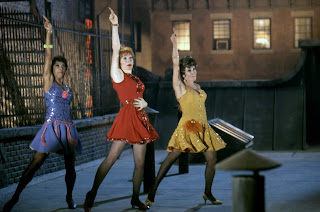 Destiny (Constance Wu) loves the laughs, sisterhood and bonding in the dressing room before they all go out to dance onstage or in private rooms for the gentlemen. Destiny wants friend. Ramona (Jennifer Lopez) acts as a mentor and reminds Destiny that it's a business. The women are not really special to the men. They're just joy-toys. Destiny is the one Asian-American dancer. She'll get a taste of what Ramona means when one horny guy beckons her by calling out "Hey, Lucy Liu!" Ramona gets on the pole and shows Destiny how to work it. How to make ever movement mean something -- like Bob Fosse or Gwen Verdon teaching a dancer new choreography for a number. This is in 2007 when business is still good. 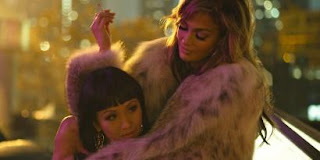 Destiny is being interviewed for the magazine feature. She's telling the reporter the story and takes us now to 2008 when the Recession hits. Business drops. The Wall Street high rollers aren't as frequent. Times may be rough for them, but they were rougher for the women in the club. Many of them had no more than a middle school or some high school education. They did not have credit cards with generous spending limits. 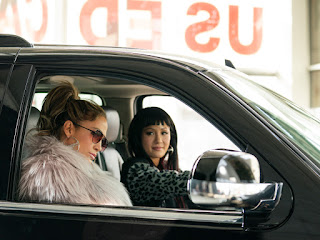 The Recession changes the club backstage in the next couple of years. Some of the dancers are gone, replaced by bitchy younger Russians who grant more sexual favors for less money. Destiny and Ramona are having hard times taking care of family member. Until smart Ramona comes up with an idea involving designer party drugs and clients' credit card privileges. Destiny is reluctant to go along with the idea but Ramona hits her with the reality that "The game is rigged. This country doesn't reward the ones who play by the rules."

Director Lorene Scafaria gives us a vibrant, funny, tense, raunchy and relevant story. When Ramona whips out some realism to Destiny about who gets rewarded, some of us will want to say "Amen on that, girl." I know I did. Just like Destiny, a top goal in my career was to make enough to take care of my mother. I have over 30 years of TV credits. Many of those years were on network TV. I've had my own prime time celebrity talk show on national TV. I've reviewed films on local and network TV before 2000. However, from 2000 to 2008, I booked three national jobs. I was the entertainment news reporter/editor on a weekly network show for ABC TV. I was a Food Network show host for two years and I was a regular on-air with Whoopi Goldberg for her weekday syndicated morning radio program from 2006 to 2008. Two of those three national broadcast jobs started me at $500 a week. Meanwhile, white folks like Billy Bush, Rosie O'Donnell and Tom Bergeron made millions. I always had to get a side gig to help take care of my mom and to afford my studio apartment in Manhattan. I felt the game was rigged too. Just like in the male-driven 2015 film, Adam McKay's THE BIG SHORT, Scafaria's female-driven HUSTLERS shows us a group of characters aware that greedy Wall Street robbed working class folks of the promised American Dream.

As for the acting. Is Jennifer Lopez worthy of an Oscar nomination? Absolutely! HUSTLERS delivers her best film role and best film performance since 1998's OUT OF SIGHT. Visually, Lopez and the director give viewers what they want. A sight of her gorgeous, generous posterior. While she displays it as Ramona, she's playing a pole dancer as business-minded as General Patton in World War II. She's proud of her soldiers and preparing them for battle in the field of gentlemen's entertainment. The stripper who sweetly revealed "I was a centerfold once" is now at war with toxic Wall Street masculinity and white privilege. 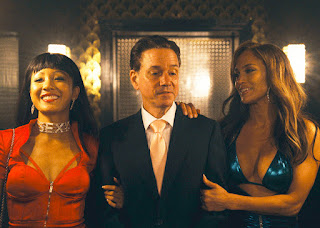 Lopez is another woman of color who went to TV because Hollywood had not good script opportunities for her. This happened with Rita Moreno after she won the Oscar for WEST SIDE STORY. And to the extraordinary Cicely Tyson after her one Oscar nomination. It's why Oscar winner Whoopi Goldberg went to THE VIEW. It's probably why Oscar nominee Rosie Perez went to THE VIEW for a year. It's why Viola Davis went to ABC TV after he second Oscar nomination. JLo was a judge on AMERICAN IDOL. 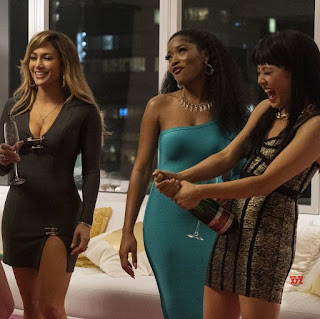 High praise also goes to the talented, under-appreciated Constance Wu. Her performance in HUSTLERS convinces me that some top ABC executives are clueless. FRESH OFF THE BOAT, the ABC sitcom, was the first ABC sitcom in 20 years about an Asian-American family. I've watched for six seasons and have loved Constance Wu as the over-achiever, too-controlling yet totally lovable mother. From its premiere, Wu has been a stand-out as one of the best sitcom moms to grace TV in years. However, we rarely saw her in ABC network interviews on shows like GOOD MORNING AMERICA. Also, did ABC ever campaign to get her a well-deserved Emmy nomination for FRESH OFF THE BOAT? She was never nominated. Then, she lit up movie screens in that box office champ, CRAZY RICH ASIANS. Constance Wu was a fabulous romantic comedy lead in a big hit movie. Still, she got no special ABC star interview. HUSTLERS is further proof of her versatility. If only  ABC had given this good actress as much attention as it's given blonde graduates of THE BACHELORETTE. 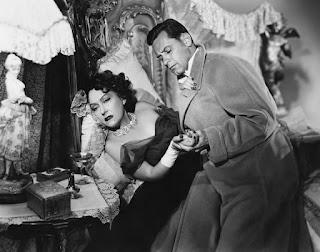 HUSTLERS came out this year and, in real life, Jennifer Lopez turned 50. If Norma Desmond had looked like JLo, she would not have been forgotten.