She's a dynamic figure in the field of American entertainment. A country music star, her work keeps true to its country roots yet it stretches far beyond that one field and can bloom wherever it lands. As a singer, she's a storyteller. Those stories are songs she wrote herself. The falsetto-ish, sweet voice of hers is always instantly recognizable. As for her compositions, Dolly Parton is one of America's most prolific songwriters. She has written for her albums, she has written for films and she has written for Broadway. She made her successful film debut in the 1980 hit office politics comedy, 9 to 5. She wrote and performed the title tune, it was a hit record and it brought her an Oscar nomination for Best Song. Dolly got the leading lady role in the film version of Broadway's THE BEST LITTLE WHOREHOUSE IN TEXAS. The Miss Mona role was a fine fit for Dolly who did a nice job performing the show's songs which were written by Carol Hall. In the 1982 musical, Dolly also sang one of her compositions -- "I Will Always Love You." Dolly got some golden royalty checks when Whitney Houston covered her song and scored a huge hit on the record charts. I was praying for Dolly to win the Oscar when her "Travelin' Thru" for the 2006 film, TRANSAMERICA, brought her a second Best Song Oscar nomination. But she lost to "It's Hard Out Here For A Pimp" from HUSTLE & FLOW. As for 9 to 5, Dolly Parton wrote songs for the 2008 Broadway musical based on the movie.  Like George and Ira Gershwin and like Cole Porter, Dolly Parton has written popular songs, she's written Oscar-nominated songs for movies and she's written for Broadway. 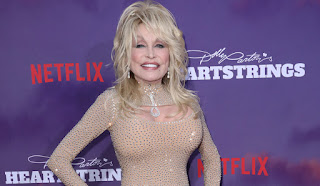 Her popular songs and the stories in her songs are the basis for Dolly Parton's HEARTSTRINGS now on Netflix. It's an anthology series, similar to shows we got in TV's bygone era such as THE LORETTA YOUNG SHOW, ALFRED HITCHCOCK PRESENTS and THE TWILIGHT ZONE. A celebrity host presents the show, introduces the story and (as was the case in some TV anthologies) makes a guest appearance in the episodes. Dolly is the host, doing introductions from Dollywood, and she appears in the episodes. I watched the first two episodes. What an enjoyable way to pass the time on a chilly Saturday afternoon.

Dolly Parton's classic country song, "Jolene," is the first episode. In her introduction, Dolly tells what inspired the composition. Way back when, she saw her husband flirting with "some hussy." The episode goes into Dolly's song and finds a fresh presentation of it. Instead of being judgmental about Jolene, the story becomes the complicated but true friendship of two women -- one married, the other a veteran of affairs with married men -- and a look at two middle-aged married people who need to fall in love all over again. Dolly has a supporting role as Jolene's honky tonk bar owner boss. 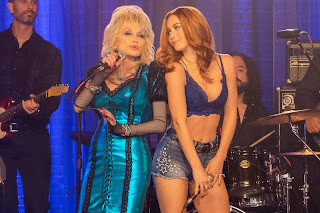 Dolly's "Two Doors Down" is the basis for the second episode. In the introduction, Dolly tells how she's long had two families. There's her family at home. Then there's her family of musicians and crew people when she's on the road. Her road family is one of different colors and LGBTQ representation. In "Two Doors Down," we see family members all needing to come out with the truth about themselves. This happens close to New Year's Eve as a controlling mother is over-arranging her daughter's wedding. You will love Melissa Leo as the steel magnolia who's acting all high-tone so she can impress her society friends. Her sweet son has an equally sweet boyfriend. But the son has yet to come out to family because he knows the news will just cause high drama with mama. She expects him to marry a woman and produce grandchildren. The bride is a TV actress. She dislikes Mom's plans for her wedding. Dad is just a big good ol' boy who feels detached from his wife now that she's gone all high-tone. Melissa Leo, formerly of NBC's LAW & ORDER and Best Supporting Actress Oscar winner for playing the tough Boston mother in THE FIGHTER, is a hoot as the controlling yet clueless Southern mother in "Two Doors Down." Her son and his boyfriend make a wonderful couple. We hope she realizes that. 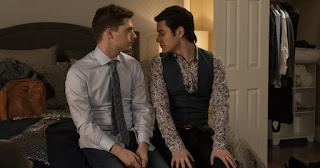 This episode is funny and touching -- especially when the son comes out to his dad. I admit, I got rather misty-eyed during this episode. When I came out to my mom...well, she acted kind of like the mother Melissa Leo played.  Here's a trailer for HEARTSTRINGS.
Nobody promotes Dolly better than Dolly. She knows herself, her image and her talent. She's a terrific entertainer and a smart businesswoman. Inside the glitzy gowns and under the big wigs is something real, something with heart. As she produces, as she promotes herself, she's also using her art to promote tolerance and fairness. She's aware that, in today's world, courtesy is not so common anymore -- but it needs to be. There are lessons of love in those two episodes I saw. I'll be watching again for more love from Dolly Parton's HEARTSTRINGS.