If the opening incident in PAPI CHULO had actually happened on a live local TV newscast, an LGBTQ news site on Twitter would have tweeted "Gay Weatherman Breaks Down During Hot Forecast." Young, slim and telegenic Sean has just begun his weather segment on a local independent Los Angeles TV station. It'll be hot the next week or so, the Santa Ana winds will whip things up and there's a continuing drought. Sean is bright-eyed and pleasant but he starts to stammer a bit. The stammer increases. Then something whips up inside of him. He starts to cry on air. Neither the floor director, the control room crew nor the anchor duo are prepared to deal with this little live TV breakdown. Sean's boss orders him to go home early and take a few days off. Handsome Matt Bomer plays Sean.

Sean lives alone in a place with a great view and a nice deck that needs a new coat of paint. We find out that Sean has been suffering through an emotional drought. Carlos is the name of the man that got away. Their relationship ended six months ago. Sean calls Carlos' voicemail to hear his voice and leave a message. In the meantime, Sean tries to paint the deck himself. The results are unsatisfactory. So, he resorts to that Southern California practice of hiring a Mexican laborer for day work. He finds a man in his 50s in front of a hardware store who's available for work. Ernesto, played by Alejandro Patiño, speaks minimal English and has a face that makes him look like a foreign cousin to Abe Vigoda. Ernesto describes himself as "married and fat." However, his wonderful wife finds him sexy.

Once Sean gets Ernesto into his car and onto his deck, he becomes chatty. He knows some Spanish, a few words and phrases here and there. More than anything, though, he needs someone who will listen to him. It's funny and there is sort a THE ODD COUPLE vibe to this pair of men. The awkward, heartbroken young gay man and the straight, middle-aged family man who keeps calling his wife with updates. 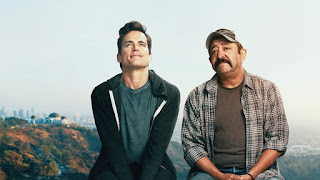 The deck job, to be done right, will take more than one day. Sean thought it would take an afternoon. Nevertheless, he has no problem picking up Ernesto for more work and dropping him back at the hardware store to catch his bus home. Sean makes lunch for Ernesto and keeps talking. He takes Ernesto with him an on exercise hike and for a ride in a rowboat. Ernesto wonders what the heck he's gotten himself into but the money is good. As unlikely as it may seem, the older man of a different race and class has a healing effect on Sean. The storm in the TV weatherman's heart seems to be passing. Chatty Sean even brings Ernesto as his guest to a gay party thrown by friends. Yes, Ernesto is like a fish out of water at the party. He makes a quick call to his amused wife. Yet, he notices that Sean truly is a sweet, lonely man with polite friends. 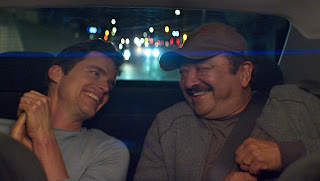 I'd only seen Matt Bomer in "hot-looking guy" roles like in the movies MAGIC MIKE, MAGIC MIKE XXL and a guest appearance on an episode of the rebooted WILL & GRACE. In this, you see that he's more than just a pretty face. There's an insecurity and a slight nervous energy to the way Sean carries himself off-camera. Also, there's that visible little cloud of unhappiness behind his bright eyes. Matt Bomer gives a good performance. Sean is likeable. One thing we notice is his group of friends at the party. The married couple hosting the party is two black gay men. The party crowd is mixed in areas of race and age. Will Sean's loneliness and chattiness drive Ernesto away? Does Sean have a crush on Ernesto?
I first heard about PAPI CHULO while streaming a film review hour on KPCC, an NPR station out of Pasadena, California. Critics reviewed this independent movie on the show in June and had positive things to say about it. Their warmth towards it plus the rent-a-buddy angle had comedy appeal to me. It did make me laugh, especially Ernesto's phone calls to the wife, but -- as the critics said -- the story takes a poignant turn.

Ernesto is married. He's a father. He's afraid of immigration. If Sean had built a wall in his mind to keep Mexicans like Ernesto out of his comfortable Caucasian American life, he would not have started to heal from the end of his relationship with Carlos. To the gay male community, it's continuously projected that youth, a handsome face and a hot sexual playground of a body are the most important items when it comes to romantic attraction. A gay character like Sean is very refreshing. I read a high-tone online review of the movie in which the critic felt it had outdated racial tropes. I disagree. We've seen characters like Ernesto in other films, laborers working for white folks. Did we learn about the laborer's family life? Did we go into their neighborhoods, drop into their homes, meet their family and friends and have food with them? Rarely. In PAPI CHULO we did. Overall, it's a gentle, entertaining film about human connections, one that doesn't put on airs -- like GREEN BOOK. It was written and directed by John Butler. It runs 1 hour 38 minutes. 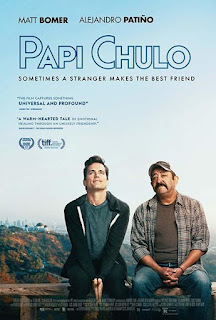