About DOLEMITE IS MY NAME

The reviews I read for Eddie Murphy's performance as the late Rudy Ray Moore were almost like thank-you notes. They were full of gratitude and appreciation. The reviews did not exaggerate. Eddie Murphy is so good in DOLEMITE IS MY NAME and the low-budget biopic is so entertaining that I watched it twice. This movie works in delightful ways that are almost subversive. You almost don't realize that this story set in the black community of my Los Angeles youth gives you fresh images of black people in working class L.A. In this "Me Too" era, we see that women can be totally naked in a work-related situation and be treated with respect by her male co-workers. We see a valentine to embracing diversity and inclusion in the entertainment industry. We see that black people read film reviews in newspapers and entertainment news publications. We'll see a black man pay back all the folks who loaned him money. I love me some DOLEMITE IS MY NAME starring Eddie Murphy at the top of his game. 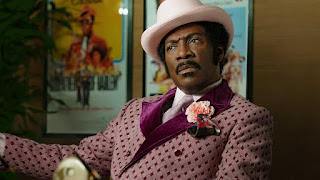 If you are unfamiliar with Rudy Ray Moore, you need to know that you will hear salty language that starts in the opening minute of the story. I was a child of the 60s in South Central Los Angeles. Everybody in the 'hood knew the work of Rudy Ray Moore. His comedy albums were "adults only" and his album covers were equally naughty. 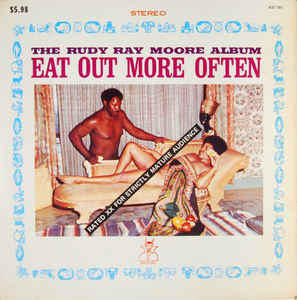 Did you see LA LA LAND? Emma Stone played the aspiring actress who works at a coffeeshop in Los Angeles. She has a meltdown because she's been auditioning for six years but nothing has clicked yet for her show biz career. White girl. In her 20s. DOLEMITE IS MY NAME takes us to the black community in Los Angeles in the early 1970s. Rudy Ray Moore is now middle-aged with a pot belly and a bald spot. He's not young, he's not handsome, he's not white, he's not sophisticated. Still, he has not given up on his show biz dreams. When first we see him, he is hustling to get his 45 played on a local radio station. Rudy manages a local record store. At night, he moonlights as an emcee in a neighborhood nightclub.  Rudy may drop lots of 4-letter words when he talks but don't let that give you a narrow-minded image of him. He's an honorable man, a street smart guy with a heart o' gold. Gratitude and appreciation are part of his spirit along with his gift for bawdy humor. While grabbing a bite with his three buddies (played fabulously by Mike Epps, Craig Robinson and Tituss Burgess), he gets verbally slapped in the face with the reality of his current status. Hurt, he leaves the diner. One of the buddies runs after him to apologize. Rudy says, "Hey, man, how'd my life get so damn small?"

In biopics of white 1950s rock stars, we saw them get musical inspiration from black music and black musicians. Here, we see a black man get inspiration from a member of his own race and community. He gets inspiration from a neighborhood wino who frequently drops into the record shop. He may be a bum to society. However, he's got knowledge to offer. He inspires Rudy. Rudy reinvents himself with a harmless pimp persona onstage -- complete with wig and sporty outfit -- and does ribald nursery rhymes for adults only in his emcee bits. Rudy is a hit. With the help of his three amigos, he cuts a grassroots comedy album as his new persona, Dolemite. Those raunchy and funny albums are a hit with the L.A. black folks in Crenshaw, South Central and Baldwin Hills.  His comedy albums are too blue to play on radio like comedy cuts from Flip Wilson, George Carlin or -- as his aunt would say -- "that sweet Bill Cosby," but he's making money. Rudy and the three buddies grab a bite again. To celebrate, he wants to treat them to a movie. One of the guys had been talking about THE POSEIDON ADVENTURE. Another mentions that he wants to see SHAFT IN AFRICA. Rudy suggests THE FRONT PAGE because he read the reviews that called it one of the funniest films now playing. The four go to see the Billy Wilder 1970s remake of a 1931 movie.

This scene rocks. I grew up in L.A. I went to see THE FRONT PAGE when it played because it was directed by Billy Wilder. I saw it at a theatre in Inglewood. Whereas TV, radio, The Los Angeles Times, The Herald Examiner, Variety and The Hollywood Reporter never hired black critics and seemed to assume black moviegoers had no awareness of filmmakers like Billy Wilder, here was a black comedian who wants to see a new Billy Wilder movie because the reviews he read were good. The movie audience is packed. The four are the only black folks in the audience.  I felt like I knew Rudy's three friends. The scene reflected movie experiences I had when I was a kid. In theaters or at school, I'd hear my friends say "How come there ain't no black kids dancing in those BEACH PARTY or Elvis Presley movies?"

Rudy's three friends had no idea what THE FRONT PAGE was about and they noticed that no black folks were in it. Rudy realized the power of film. His next goal was to make a movie.

He goes on the road doing comedy dates as Dolemite. At one club, he sees a woman at a low point in her life. After his show, he talks to her. Her name is Lady Reed. She's a single working mother who broke free from an abusive relationship. Rudy sees something special in her that nobody else ever did. He makes Lady Reed part of his comedy act. What a performance Da'Vine Joy Randolph delivers as Lady Reed. Her character goes from wounded and cynical, to hopeless, to business-like, to unexpectedly happy in DOLEMITE IS MY NAME. Da'Vine Joy Randolph lights up the screen.

Rudy and his pals spot a black actor in a booth at a strip club. Rudy approaches him to pitch the Dolemite movie. The actor turns out to pretentious and disinterested. He immediately chuckles and tells them that he has an agent, he has an entertainment lawyer, and he's been "directed by Roland Polanski." The actor played an elevator operator in ROSEMARY'S BABY. Persuasive Rudy offers the actor that chance to direct the movie. Bingo. That appeals to the actor's vanity.  As the pretentious director, Wesley Snipes reminds us that he's got comedy skills. Giving his character a splash of late 1960s Sammy Davis Jr., it's Wesley Snipe's best comedy performance since 1995's TO WONG FOO, THANKS FOR EVERYTHING! JULIE NEWMAR. 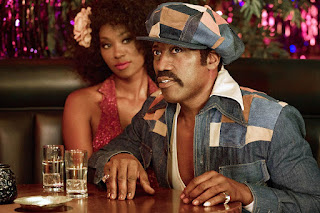 You may feel it's a bit like BOWFINGER and ED WOOD. You will laugh. You will love seeing Rudy, his three male buddies and Lady Reed actually get their independent movie project done. They are black, they are middle-aged, one of the guys is gay and there's a full-figured woman. They are everything Hollywood does not want. This group will stick to its dream. 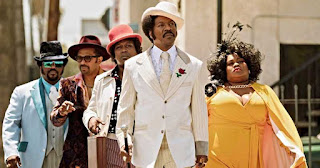 DOLEMITE IS MY NAME is not just a funny biopic. It's about perseverance, diversity, inclusion and representation. Is Toney (Tituss Burgess) treated like an outcast for being gay? No. He works for Rudy in the record store. Rudy confides in him. He makes Toney the accountant on the movie project because he keeps accurate books right down to the penny and he's dependable. Lady Reed has never seen a woman who looked like her on a movie screen. Click onto this link to see a trailer:

Rudy and Lady Reed are both single. There's no romance between them, yet he has affection and respect for her. With his help, her life will be in a much better place at the end than it was when they met. Although Rudy Ray Moore's Kung fu blaxploitation movie got lousy reviews from the white critics, his low-budget DOLEMITE indie movie did better at the box office than Billy Wilder's remake of THE FRONT PAGE did. DOLEMITE IS MY NAME is a funny and heartwarming R-rated biopic that I'll be watching again. I need the laughs.