This post is about a film that featured actor Hurd Hatfield. He had a long career with some noteworthy films in his list of credits. His most famous performance was his lead role in MGM's 1945 release, THE PICTURE OF DORIAN GRAY. Based on the classic novel by Oscar Wilde, the lead role went to Hatfield quite early in his film career. His other film credits included 1944's DRAGON SEED starring Katharine Hepburn, 1948's JOAN OF ARC starring Ingrid Bergman, KING OF KINGS (1961), EL CID (1961), THE BOSTON STRANGLER (1968) and CRIMES OF THE HEART (1986). Hurd had a handsome, lean, rather aristocratic face that served him well in playing Dorian Gray. It could seem at once ethereal and eerie. When I was a kid, I loved seeing THE PICTURE OF DORIAN GRAY on local TV because it gave me such a creepy feeling. It wasn't a monster movie. It wasn't a science-fiction movie. But glacially elegant Dorian Gray definitely was unnatural, unearthly, wicked and almost like a vampire. He never aged. 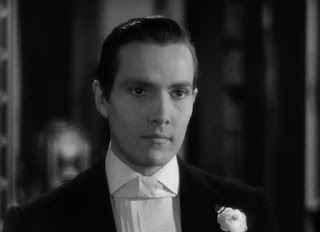 As I got older, I came to appreciate the movie much, much more. It stars Hurd Hatfield, George Sanders, Donna Reed, Angela Lansbury and Peter Lawford. One of the biggest stars involved with the 1945 production of THE PICTURE OF DORIAN GRAY is not seen at all in the MGM movie. 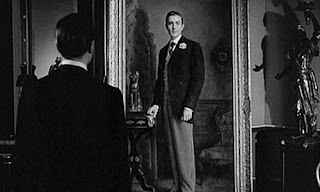 He's veteran cinematographer Harry Stradling. What he does with the black and white cinematography is rich and psychologically revealing. It enhances the story and the characters. The movie was on TCM one day over the summer and I watched it. I was fascinated by the dark beauty of it. The old movie totally drew me in again so powerfully that I logged off social media in order to give it my full attention. In my youth, I noticed that Hatfield did not move as much as other characters did. There was a stillness to him. Dorian Gray drew people to him. Watching it again, I noticed more of Stradling's art as cinematographer. It you watch it, notice that characters such as the ladies played by Donna Reed and Angela Lansbury are fully lit facially. They get lovely close-ups. Then notice Hurd Hatfield's impassive face in his close-ups. Half his face is lit, the other half is in shadow. If he was moving around as much as the other players were, you couldn't get that lighting effect on his face. That half lit, half dark effect is excellent. It's perfect for Dorian Gray. Also, when I was a youngster, I thought that Hatfield's face was flat. Nothing happening. I didn't mind because the story was so spooky. I was wrong about the actor. Hatfield is like Jane Greer playing the femme fatale character in the 1947 film noir classic, OUT OF THE PAST. The face is impassive as crime is being committed, but there's a lot going on in the eyes. Hurd Hatfield gave a fine performance.
There's one sequence that is chilling and, artistically, beautiful. The man who painted Dorian Gray's picture 20 years earlier goes to the attic to see it. He is a good man. Dorian has evil deeds on his soul. The door is closed and the lighting brings out a similarity to the sign of the cross in the carved design of the door. Dorian's face will be half in light, half in shadow. A lamp will swing back and forth causing changes in light and shadow. This is a film that utilizes the psychological impact of black and white and saves vivid color for a shocking special effect.

1945's THE PICTURE OF DORIAN GRAY has performances and production values worthy of your attention, if you're one who appreciates the art of classic films. The film brought Angela Lansbury an Oscar nomination for Best Supporting Actress. 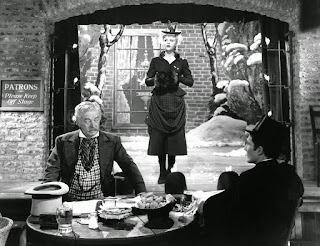 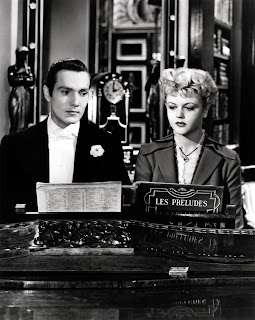 Harry Stradling's film credits included 1938's PYGMALION, EASTER PARADE, A STREETCAR NAMED DESIRE, A FACE IN THE CROWD, GUYS AND DOLLS, AUNTIE MAME, MY FAIR LADY and FUNNY GIRL. Harry Stradling won an Oscar for his cinematography on THE PICTURE OF DORIAN GRAY.