We Will Miss Rep. Elijah Cummings

A Maryland Democrat and the House Oversight Committee Chairman. President and Mrs. Obama sent a loving condolence message calling him "steely and compassionate." House Speaker Nancy Pelosi said "I'm devastated by the loss" adding that he "always strove to reach across the aisle." On Twitter she wrote this about today's news that Rep. Elijah Cummings, her dear friend, passed away at age 68: "Elijah was our North Star. He was a leader of towering character and integrity..." 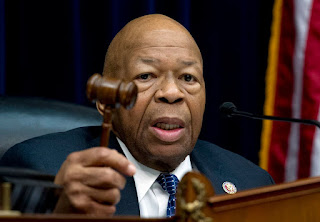 Congress and America have lost a hero. Rep. Cummings was one of the last remaining giants on Capitol Hill. A mighty and vital voice that called out to keep our democracy intact and to bring justice to the disenfranchised. Remember his forceful disgust on July 7th at the way immigrant Mexican children in cages were denied simple privileges for personal hygiene -- here in America? His righteous anger was voiced with grace and clarity. He responded to Trump's insults about Baltimore with dignity. Rest in peace and power, Rep. Elijah Cummings. Your service was magnificent.

"200 to 300 years from now, people will look back on this moment and they will ask the question, 'What did you do?'...I may be dancing with angels when all of this is corrected, but I've got to tell you, we must fight for our democracy."

That important question he posed -- "What did you do?" in relation to keeping our democracy intact.

On this day in history, Oct. 17th in 1939, Frank Capra's MR. SMITH GOES TO WASHINGTON premiered in Washington, D.C. James Stewart starred as the naïve junior Senator whose moral conscience gets beaten down by political corruption. Jean Arthur stars as the political insider who knows of the graft machine at play, is frustrated along with members of the press at the inability to stop it, and she knows how Capitol Hill operates -- more so than Senator Smith does. His honesty and fairness, his care for the little guy, melt her cynicism and warm her heart. When he's been beaten down, she motivates him to stand back up and fight. She motivates him to refuel his moral conscience by reminding him how important it is. Watch this clip from Capra's classic. Listen to Clarissa Saunders (Jean Arthur) and notice that she poses the same question Rep. Elijah Cummings did.


We need more people like Clarissa Saunders and the late Rep. Elijah Cummings to motivate us to act with "plain, decent, everyday, common rightness."

By the way, this day in history was also the birthday of actress Jean Arthur, one of the best film actresses of her generation.
at October 17, 2019