I love me some Craig Robinson I have ever since I saw him as the strict nightclub doorman in the 2007 comedy, KNOCKED UP. He reminds me of every classmate who was buddy of mine back in high school in South Central L.A. Robinson, like those classmates, always got belly laughs from me. I laughed watching him in the movies PINEAPPLE EXPRESS, HOT TUB TIME MACHINE and the apocalypse sci-fi comedy, THIS IS THE END. You may have watched him regularly as Darryl on the NBC sitcom, THE OFFICE. Did you know that Craig Robinson can speak German? I didn't either. He speaks German on Netflix in MORRIS FROM AMERICA. 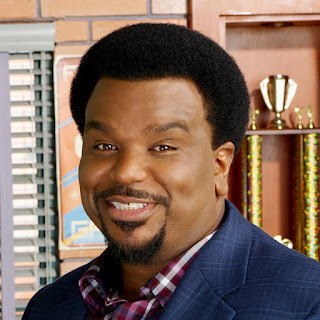 Craig Robinson is a big huggable papa bear of a guy. That quality serves him well in MORRIS FROM AMERICA. He's a widower father raising a 13 year old son named Morris. When we first see them, they're at home. Dad is trying to teach son some new rap beats. Morris listens attentively but he thinks the beat is too slow. They bicker in a friendly fashion with dad dropping some R-rated words. Then they go out for ice cream. As they talk about the flavors, they're walking in what appears to be an outside mall area. But it doesn't look like a recognizable city area. As the camera pulls back for a wide shot, we see that they're not in the U.S.

They live in Heidelberg, Germany. Morris has a tutor who teaches him German. He attends youth center programs where -- you guessed it -- he's the only Black kid present. However, the white German boys play basketball and know about rap music. Morris' youth center isn't presenting just light fun fare. His instructor quotes the philosophies of Marcus Aurelius. As Morris learns how to speak German and gets an upscale education at the center, Morris gets frustrated when he has to punch through some stereotypes about Black American youth. 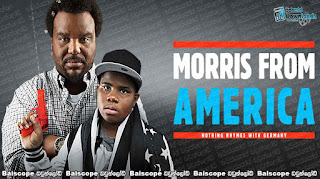 MORRIS FROM AMERICA is a 90-minute coming of age drama that gives comedian Craig Robinson the opportunity to display his skill at playing more serious scenes than we're accustomed to seeing him do. He still makes you smile and there's still that Craig Robinson personality we love. However, we also see that Curtis Gentry, his character, is a man who deeply misses his late wife and continues to wear his wedding ring. Despite his dropping some occasional 4-letter words, he's a devoted dad whose son is the top priority in his life.

Dad brags about his amateur rap skills in the Bronx back in the day. He states, "I had sick flow" about his freestyle rap. Morris wants to rap and he does. He raps about hooking up for wild sex. Dad criticizes Morris when he reads his lyrics because he knows Morris has never had any wild sex. What I liked about that scene is that Curtis was essentially telling his aspiring artist son to write what he knows. Make his voice authentic instead of ripping off what he's heard from others.

Morris becomes infatuated with a pretty German girl in his youth center program. He's the obvious fish-out-of-water, so there's a scoop of your standard American high school comedies about pecking order and first crushes sprinkled with a little BLAZING SADDLES. Katrin, the German girl, stuns Morris with some questions about Black boys. "Teach me how to be charming," he says to his tutor when he longs to be accepted by Katrin. Katrin will lead him into teen temptation.

Things get complicated, Morris disobeys Dad when Dad's out of town and Morris gets stranded in another city. The situation could've been worse. Morris always has that little "Jiminy Cricket" voice in his head that keeps him from doing all the questionable things the other kids do.
It's a different and entertaining story of an African American single papa bear and his young cub. If you're a Craig Robinson fan, I recommend this. He's impressive with dramatic material.

The performances are good. Chad Hartigan, an Irish-American filmmaker, wrote and directed this feature. MORRIS IN AMERICA premiered at the Sundance Film Festival in 2016. How did Curtis and Morris wind up in Germany? You'll find out. Robinson's tender and fatherly monologue in the car scene near the end of the story is a winner. I loved that scene.

Kids say the darndest things. Sometimes in German. Check out Craig Robinson and Markees Christmas as father and son in MORRIS FROM AMERICA available on Netflix.
at October 03, 2019