The popular 1959 remake, IMITATION OF LIFE, aired on TV recently and I watched it. I had not seen it uncut and commercial free in four years. Douglas Sirk directed it, based on a hit 1934 film of the same name. Claudette Colbert starred in the black and white original. Lana Turner starred in the updated Eastman color remake. 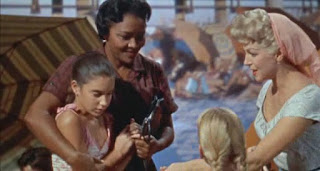 If you're familiar with the movie, you know that it's a race drama. In both versions, we see two single working mothers, one is white and the other is black. The black woman becomes the maid/friend to the white woman. Each one has a little girl. The black woman's little girl is light-skinned like her absent father -- so light-skinned that she can pass for white. And she wants to pass for white. She wants the freedom and privileges that being white bring in American society. All four females live together in New York City where the white mother's career will ascend. She'll become rich and famous. The black mother will remain a maid and beloved friend, still working for and living with the white mother. This holds forth in both versions of the film. In the original version, Claudette Colbert's character gets rich and famous in the packaged food industry. In the remake, Lana Turner's character finds success and stardom on Broadway. Each mama will have drama as her daughter grows up. 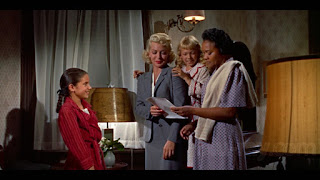 For her performance as Annie Johnson, the maid/mother, Juanita Moore entered Hollywood history books as the 4th black woman to get an Oscar nomination. She was nominated for Best Supporting Actress. I dare your heart not to be moved watching her portrayal. Annie's devotion to her daughter is so deep, matched by her desire for Sara Jane to be truthful about her race, that each time Sarah Jane Johnson proclaims she's really white and each time she rejects her black mother, the denials act like a terminal virus that slowly but eventually claims Annie's life. Juanita Moore deserved that nomination. Also in the Best Supporting Actress Oscar category for that year was Susan Kohner as the grown light-skinned Sarah Jane. Kohner's parents were Mexican actress Lupita Tovar and Jewish film producer Paul Kohner. 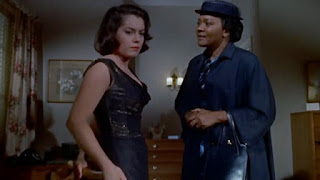 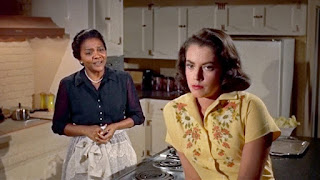 Sirk's IMITATION OF LIFE has a lot of fans who are younger than I and Caucasian. When they talk about the film, one thing I notice is they always mention how heartbreaking and stinging the racial conflict of the story is. I agree. But rarely do they mention the original version. In the original version, the grown light-skinned daughter was memorably played by the beautiful, talented Fredi Washington, an actress who truly was a light-skinned black woman. The irony was that Hollywood executives -- in real life, not an imitation of it -- told Washington that if she passed for white, they could get her the quality of roles that went to actresses like Constance Bennett and Joan Crawford in the 1930s. But Fredi Washington refused to deny that she was a black woman, so Hollywood had no other opportunities for her. She did stage work in New York. Louise Beavers portrayed the maid/mother in the 1934 version. If the Best Supporting Actress category had existed at that time, Louise Beavers and Fredi Washington should've been nominees in that category for their dramatic performances. Beavers continued to work steadily in Hollywood films of the 1930s and 40s, always in a maid role. 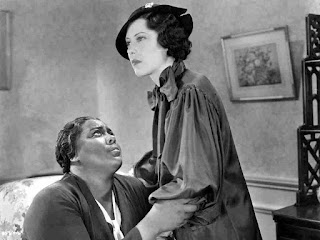 As I watched Sirk's IMITATION OF LIFE again, I was awed to a deeper degree by the excellence of Juanita Moore. Then I got angry. Juanita Moore, like the recently departed Diahann Carroll, was another in a list of black/Latina actresses who got an Oscar nomination and then had to turn to TV for steady employment because Hollywood had no other good script offers. Cicely Tyson and Oscar winner Rita Moreno are also on that list.

IMDb stands for Internet Movie Database. Juanita Moore was a Best Supporting Actress Oscar nominee for 1959's IMITATION OF LIFE. Diahann Carroll was a Best Actress Oscar nominee for 1974's CLAUDINE. Carroll was the first black woman to win the Tony Award for Best Actress in a Musical. The 1962 musical was Richard Rodgers' NO STRINGS. The interracial love story about two Americans in Paris also got Tony nominations for Best Musical, Best Original Score, Best Choreography and Best Costume Design. Hollywood never made a film version like it had of other Broadway musicals that featured the music of Richard Rodgers. Carroll was a trailblazer with her lead role on the NBC sitcom, JULIA, before her film role in CLAUDINE.

Go to the IMDb website, search the names Diahann Carroll and Juanita Moore. Go into Filmography and then into Actress. Notice the lack of major film roles after the movies that brought them Oscar nominations. The bulk of their work after their Oscar nominations is on TV. Juanita Moore should've had several other good film roles after her IMITATION OF LIFE performance. Her smart and sad portrayal of a woman whom society always pushes back into a supporting role as a caretaker shows how racial discrimination eats at the soul.

There's another strong performance in Sirk's IMITATION OF LIFE and it's one that rarely gets mentioned. I really noticed it more in my recent viewing. Karin Dicker as 8-year-old Sarah Jane really bites into her role and effectively communicates the girl's racial anger and jealousy. Sirk does something very interesting and almost subliminal with little Sarah Jane. When she compares herself to the white mother's little girl, her playmate, and she rages "I'm white! I'm just as white as she is" a couple of times -- one being with a Christmas tree in the background -- Sirk has half of her face in light, the other half is in shadow.

There's one small scene that stood out to me more this time around. The two mothers have been in each other's life and sharing the same home since the white mother was a struggling print model seeking magazine ad work. Now she's a celebrated Broadway star who has grown from sophisticated light plays to a strong, kitchen sink drama dealing with race issues. In real life, after all those years, she finds out the Annie has been an active member of social organizations and a positive force in her community. The impressed and surprised actress remarks, "I never knew." Annie sweetly yet frankly replies, "You never asked." Annie knew more about her than she knew about Annie. Annie knew more about the actress' credits than she knew about Annie's. How many white friends of black friends have asked them about their lives? How many have seriously asked their black friends about restrictions to freedom and equal opportunities they've experienced because of their race? 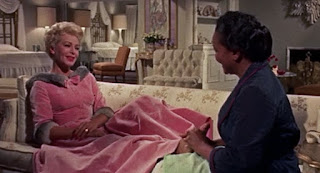 Thank you, Douglas Sirk, for a good remake. Thank you, Juanita Moore for an unforgettable performance. Hollywood was lucky to have you -- and didn't realize it.

For the Internet Movie Database, go here to  www.imdb.com.