His father is the Oscar-winning film actor and producer, Michael Douglas. His grandfather is the Hollywood screen legend, Kirk Douglas. Cameron Douglas, born into what some would call Hollywood royalty, has survived some brutally rough life. He was hooked on cocaine and heroin. He had a gun and might have killed someone out of desperation caused by drugs. Fortunately, he didn't. He did time in federal prison and was on suicide watch. He wrote about this in a new memoir. His famous father thought he'd get a call one day telling him that his son, Cameron, was dead. Cameron was interviewed in a one-hour ABC News special that aired last night. Veteran journalist Diane Sawyer conducted the exclusive interview.

If I was her producer for the show, I would've argued with our corporate masters about one specific clip. Because of Cameron's celebrated family history, I expected to see clips of grandfather's famous films. A news program can show clips from classic films. It doesn't have to pay for them because it's a news program. Remember in the heyday of INSIDE THE ACTORS STUDIO when James Lipton would interview stars who acted in celebrated older films? He rarely showed clips. That's because his show was considered programming/entertainment and he would've had to pay for use of older clips. That kind of money was not in his budget.

In the first 10 minutes of the news special, when Diane Sawyer had established the extremely dangerous road Cameron Douglas had been traveling down since his teen years, we see footage of Kirk Douglas. Film footage. One movie clip is shown with the audio up. Kirk is singing and playing an accordion. Then there's a clip of Kirk Douglas in an archive interview singing the same song. It's positioned as if that musical movie scene is as famous as the "I'm Spartacus" scene from SPARTACUS, a scene of him as Vincent van Gogh in LUST FOR LIFE or his angry outburst at the military irresponsibility in Kubrick's PATHS OF GLORY. Kirk's musical moment with an accordion was entertaining but not as famous as those other scenes. The accordion scene was from a 1954 release -- 20,000 LEAGUES UNDER THE SEA.  It's a Disney film.

Disney is the parent company of ABC News.  I would've argued that clip's placement that early in the hour because it seemed like -- after establishing ex-con Cameron Douglas could have been killed or died of a drug overdose -- there had to be a blatant plug for Disney Classics. There was a corporate selfishness about its placement there. An insensitivity.  Later in the hour we did see clips of Kirk Douglas in SPARTACUS, PATHS OF GLORY and GUNFIGHT AT THE O.K. CORRAL. But none got the audio time that 20,000 LEAGUES UNDER THE SEA did. 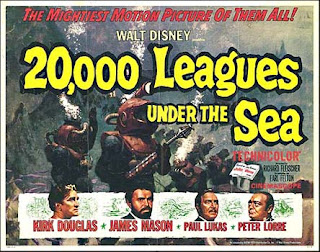 This is just my opinion as a viewer. I haven't had a steady, weekly job in years. I have worked in TV. I had my own VH1 talk show and Kirk Douglas was my sole guest for the premiere episode back in the 80s. I've interviewed Michael Douglas a couple of times. At a party in New York City, I met and chatted with another Kirk Douglas son -- the one who later died of drug overdose. All three treated me like a gentleman. I would've placed the clip from the 1954 Disney movie later in the hour, during a lighter section when Cameron told of a funny comment from grandfather Kirk. That is, if corporate masters forced us to use the clip.

DANCING WITH THE STARS recently had a 2-hour salute to Disney night. GOOD MORNING AMERICA now has two distinct personalities. The first hour is news. The second hour is practically a music variety show, heavy on the Disney product promotion, with a studio audience that applauds. I wish Disney would pull back from plugging itself in news features. To keep its dignity, if you will.

Michael Douglas was in the last half of the interview. It was very touching. Congratulations on being clean and calm now, Cameron. Big blessings to you and your family.