A Morning with Mitzi Gaynor

This is a programming note about one of my longtime favorite entertainers. I've blogged before that, in our African American Catholic home back in South Central Los Angeles, any and every day that brought us a new Mitzi Gaynor music variety special on CBS was practically a Holy Day of Obligation as far as our mother was concerned. She adored Mitzi Gaynor. Mom introduced me to her work before I ever saw one of her sensational CBS special. The MGM musical, LES GIRLS, starred Gene Kelly as a showman/director who toured Europe with his trio of fabulous female singers and dancer called "Les Girls." Mitzi played a member of the trio. When the 1957 musical aired one Saturday night on NBC, Mom was Commander of the TV that night and LES GIRLS was what we were watching. I am not complaining. I loved LES GIRLS and picked up the love of Mitzi Gaynor from Mom. (There's Mitzi on the left.) 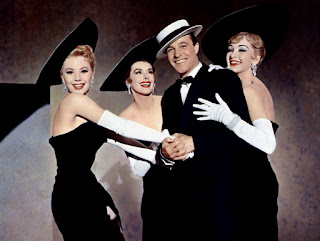 Mitzi had a knock-out dance number when Gene Kelly. The number was a send-up of Marlon Brando as he was leading a motorcycle gang in 1953's THE WILD ONE. George Cukor directed LES GIRLS. The musical had an original score by Cole Porter.

She lit up movie screens in ANYTHING GOES with Bing Crosby and Donald O'Connor, THE JOKER IS WILD with Frank Sinatra, LES GIRLS, THERE'S NO BUSINESS LIKE SHOW BUSINESS with Ethel Merman and Marilyn Monroe, Rodgers & Hammerstein's SOUTH PACIFIC, HAPPY ANNIVERSARY with David Niven and SURPRISE PACKAGE with Noel Coward. And Mitzi Gaynor wearing Bob Mackie originals in her CBS specials -- now THAT'S entertainment. Yes, I've been a fan a long, long time. I even saw her onstage once in her one-woman show. Not only was it great fun, it was a lesson in show biz artistry.

Mitzi Gaynor made a sold-out, packed audience feel as if we were all in her living room watching her perform at a party. Her ability to connect with that quality of intimacy and warmth was amazing to experience. When I lived in New York City in the Chelsea section of town, early in October following the September 11th attacks, I rented SOUTH PACIFIC from my nearby video store. Hearing her sing "A Cockeyed Optimist" helped my spirits to refresh and resurrect. She made me feel as though it was alright to smile again. 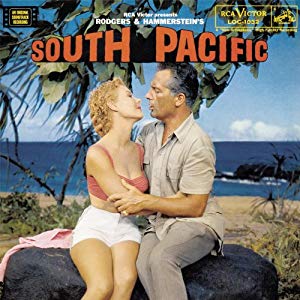 If you too are a Mitzi Gaynor fan, make a note on your SmartPhone of whatever. She will be profiled this coming weekend on the CBS SUNDAY MORNING news magazine show. That's Sunday, October 6th, on CBS. The program starts at 9am ET. 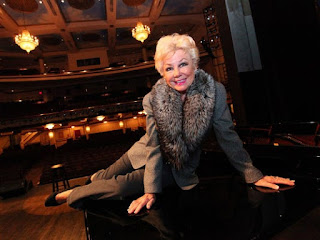