A Dental Appointment from Preston Sturges

"It was the night of September 30th. I was in excruciating pain." Every time the character played by William Demarest declares that fact about his life in 1846, it tickles the heck out of me. It's a line from a movie written and directed by Preston Sturges. If you're a classic film fan, you know that Preston Sturges was the golden boy of writer/directors at Paramount Pictures in the 1940s. That's when he directed his own screenplays and hit homeruns with effervescent comedies that were both daft and wise, "but with a little sex" as a character in his 1941 comedy classic SULLIVAN'S TRAVELS says. In the middle of his written and directed by winners for Paramount was a curiosity that was meant as a historical drama. However, it makes me laugh. Just like SULLIVAN'S TRAVELS, it has drama, conflict, greed, physical pain, a shapely blonde -- and Joel McCrea. This 1944 release is THE GREAT MOMENT, the biography of Dr. William T.G. Morton. He was a married Boston dentist who discovered the use of ether for general anesthesia and, in the movie, successfully used it on a patient with a toothache on September 30th, 1846. 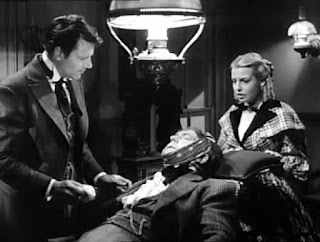 Again, let me refer to SULLIVAN'S TRAVELS. On the face of it, the subject matter of THE GREAT MOMENT sounds like it could be the kind of "deep dish" movie drama that The Girl (Veronica Lake) in SULLIVAN'S TRAVELS complains about to the hobo, not knowing he's really a wealthy Hollywood producer traveling incognito. She lights up talking about the silly comedies that made her laugh. It's documented that THE GREAT MOMENT was finished in 1942. By that time, Sturges had entertained audiences with these Paramount releases he wrote and directed: THE GREAT McGINTY (1940), CHRISTMAS IN JULY (1940), THE LADY EVE (1941), SULLIVAN'S TRAVELS (1941) and THE PALM BEACH STORY (1942).

However, there were problems. The studio didn't like the dental biopic. Reportedly, Sturges meant the film to be serious. Preview audiences were confused. A studio exec had it re-edited so it could be pitched as a comedy. THE GREAT MOMENT was released in 1944 after the 1943 classic Sturges comedy, THE MIRACLE OF MORGAN'S CREEK.

When you read accounts of Paramount execs being dissatisfied with the dramatic dental story highlighting rivalry between two fields of the health profession -- dental and medical -- it seems as though Preston Sturges himself was like the successful young Hollywood producer in SULLIVAN'S TRAVELS. The studio wants "Sully" (Joel McCrea) to make another comedy. But he wants to make an adaptation of the severe, social issues novel called O, BROTHER, WHERE ART THOU?

I can see how audiences would've been confused. THE GREAT MOMENT features the Preston Sturges stock company supporting players, the recognizable faces you see in his screwball comedies. The movie opens and the first two familiar faces seen are on Joel McCrea and William Demarest. Esther Howard, seen as the wife of The Wienie King in THE PALM BEACH STORY, is all gussied up in 1846 Boston attire and walks into the dental office sad-faced and saying "I'm in terrible pain, dearie." Porter Hall, seen as one of Sullivan's Hollywood studio staff members in SULLIVAN'S TRAVELS, plays U.S. President Franklin Pierce. In the Massachusetts General Hospital scenes, there's fussbudget Franklin Pangborn sporting muttonchops as a hospital executive. 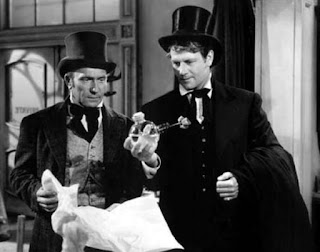 Demarest plays Dr. W.T.G. Morton's first patient to go under the ether and have a tooth removed without pain. There was previous try on him with the wrong kind of ether. Instead of putting the patient in a sleep-like state, it energized him like he was leading a cavalry charge in battle. This makes for a funny scene with Demarest and McCrea engaging in some broad, fast-paced physical comedy that leaves the entire dental office in a shambles. How could Sturges have thought audiences would've taken that madcap scene seriously?

To me, THE GREAT MOMENT works viewed as a parody of those assembly-line biopics that came out of Warner Bros. in the 1930s. Think of those biographical dramas that took themselves so seriously, like the ones starring Paul Muni as Louis Pasteur, Emile Zola and Benito Juarez. One of the first elements to give me that parody feeling is Betty Field as Dr. Morton's loving and fluttery wife. Field makes Lizzie a funny Preston Sturges supporting character. 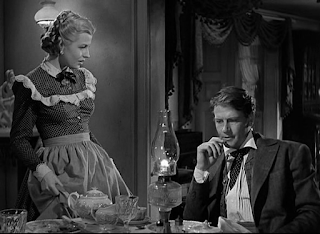 THE GREAT MOMENT opens with celebration. Dr. W.T.G. Morton is being hailed with a little parade. People hold and display signs praising his discovery. He called his ether discovery Letheon. Signs read "Letheon Ends Pain" and "Pain Is No More." Dr. Morton waves at his lovely wife during the festivities.

Then we jump ahead 20 years. William Demarest's character sees a prize medal in a pawn shop and buys it. He tells the clerk he knows the man who hocked it … "only he's dead now." He visits and returns the medal to Dr. Morton's widow. 20 years later and the only thing that's changed about her is her hairdo. She has the same small waist and the same attractive bustline. There's not one age wrinkle on her face as she sits in a form-fitting dress and launches into a melancholy monologue about her late husband, a man who was "forgotten before he was remembered."

Morton's wife, Lizzie, tells of when he was a simple farmer with their three little kids. He loved that farm and his animals. Lizzie smiles tenderly as she recalls that he won a prize for "Best Sow." Her grown daughter enters the room to announce that dinner's ready. Lizzie invites Eben (Demarest) to stay for dinner. The daughter made pie. Lizzie says wistfully, "My, how your father loved pie." 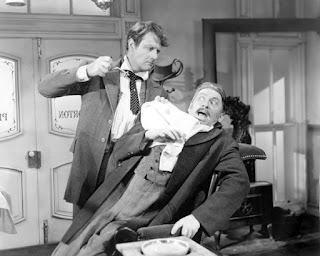 Then we flashback to see how Lizzie and William met and started courting.  They married. She doesn't really seem to understand his work but she supports it. He hates that people are always screaming in the dental chair. William remarks, "There ought to be a way to de-sensitive a nerve." He works tirelessly to find a way. His discovery makes his family financially comfortable. Lizzie can afford maids, a butler and a large dining room table so she can host lavish dinner parties.  One night, there were so many complications with William's work that he didn't make it home in time for dinner with guests. Lizzie has a little bit of a snit because the dinner didn't go as smoothly as she'd planned. Says Lizzie "...and then the sherbet came in ahead of the fish!"

I love that line. I don't see how any Sturges fan could've taken this film to be a drama.

The drama, the conflict, comes when Dr. Morton tries to coax the medical field to utilize his anesthesia when performing surgery. He wanted people to be free of pain. The men in the medical field wanted profit, they were jealous of his discovery, and they regarded dentistry as a lower-class profession. That corporate greed, if you will, drained Dr. Morton of the wealth acquired from his discovery and he was overlooked in medical history. That is some high drama. But when you have Franklin Pangborn in muttonchops arguing with Joel McCrea as William Demarest pipes in with "It was the night of September 30th. I was in excruciating pain," you can't help but giggle if you're a fan of the Sturges classics.
THE GREAT MOMENT was a flop when it opened. Nevertheless, it has moments of that distinctive Sturges style, it has Joel McCrea and it runs only about 80 minutes. Even if "the sherbet came in ahead of the fish," it's not all bad.
at September 30, 2019