Laughs from THE BREAKER UPPERERS

I read a brief item about this 2018 comedy on Twitter. The tweet read that THE BREAKER UPPERERS was ultimately a comedy valentine to independent women and it was a very funny New Zealand film that clocks in at only about 1 hour and 20 minutes on Netflix. Well, I found it and decided to give it a try. THE BREAKER UPPERERS broke me up laughing in the opening scene. Off-camera, we hear a woman sobbing like Doris Day when she realized she'd been romantically scammed in PILLOW TALK. We're looking at two female cops watch the sobbing woman who has learned from the officers that her relationship is over. The man in her life is gone. 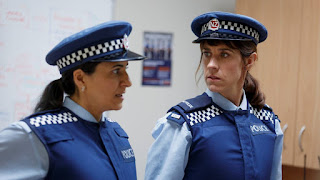 The female cops leave and get into their car. Once in, we discover they are not really police officers at all. Jen and Mel are best friends who run a break-up business. People who want out of their relationships, but don't have the guts to do it themselves, hire Jen and Mel to concoct a devious but effective way to do it for them. Sure, what they do seems mean. But Jen sees it as removing a tree that's blocking out the sun -- and doing it without physical harm. Jen is straight. Mel is bi-sexual. Neither is in a relationship. Neither is really happy with her life as it is. Something feels missing. Jen hooks up with a guy she met on Tinder. They're having sex. It seems to be one of the rare times he's felt confident enough to remove his undershirt during sex. She frankly tells him she's imagining he's someone else.

In the first scene, when we see a montage of the clients who want to end their relationships, that background music is Vivaldi -- just like in the divorce classic KRAMER VS. KRAMER. Jen and Mel are like private eyes in reverse. Instead of trying to track someone down, they don different outfits and identities to chase disappointing sweethearts away. 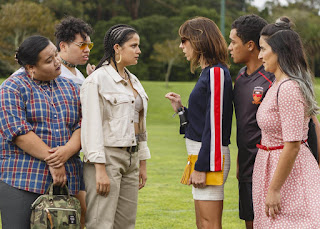 Things are going pretty well with the business until Mel's conscience starts to get the better of her and one hunky young client finds her attractive.

Remember the British sitcom ABSOLUTELY FABULOUS with those two irresponsible best friends who lived for cocktails and designer clothing? There's an ounce of that in THE BREAKER UPPERERS with a splash of NAPOLEAN DYNAMITE. Here's a trailer.

For American viewers, the only recognizable face in that cast is the actor who played the Tinder guy with body issues. If you get HBO and watched the daffy sitcom, FLIGHT OFTHE CONCHORDS, you'll recognize the tall and bespectacled Jemaine Clement.

If this was an American comedy with two males in the lead roles, like a comedy produced by Judd Apatow, a bunch of the laughs would be broader and ad libbed scenes that would've been better as DVD extras would've been put into the movie adding an unnecessary 20 minutes to push towards a 2 hour and 10 minutes running time. This New Zealand feature runs on dry wit and keeps the story trim. It may not be a great comedy like a SOME LIKE IT HOT, TOOTSIE, DR. STRANGELOVE or THE LADY EVE, but this tale of deception, duplicity, true feelings and friendship is good entertainment. I laughed a lot and, even though each one is a hot mess, I loved the two lead characters. It was fun watching those two women move on from cynicism. I plan to watch it again on Netflix. 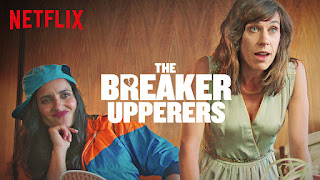